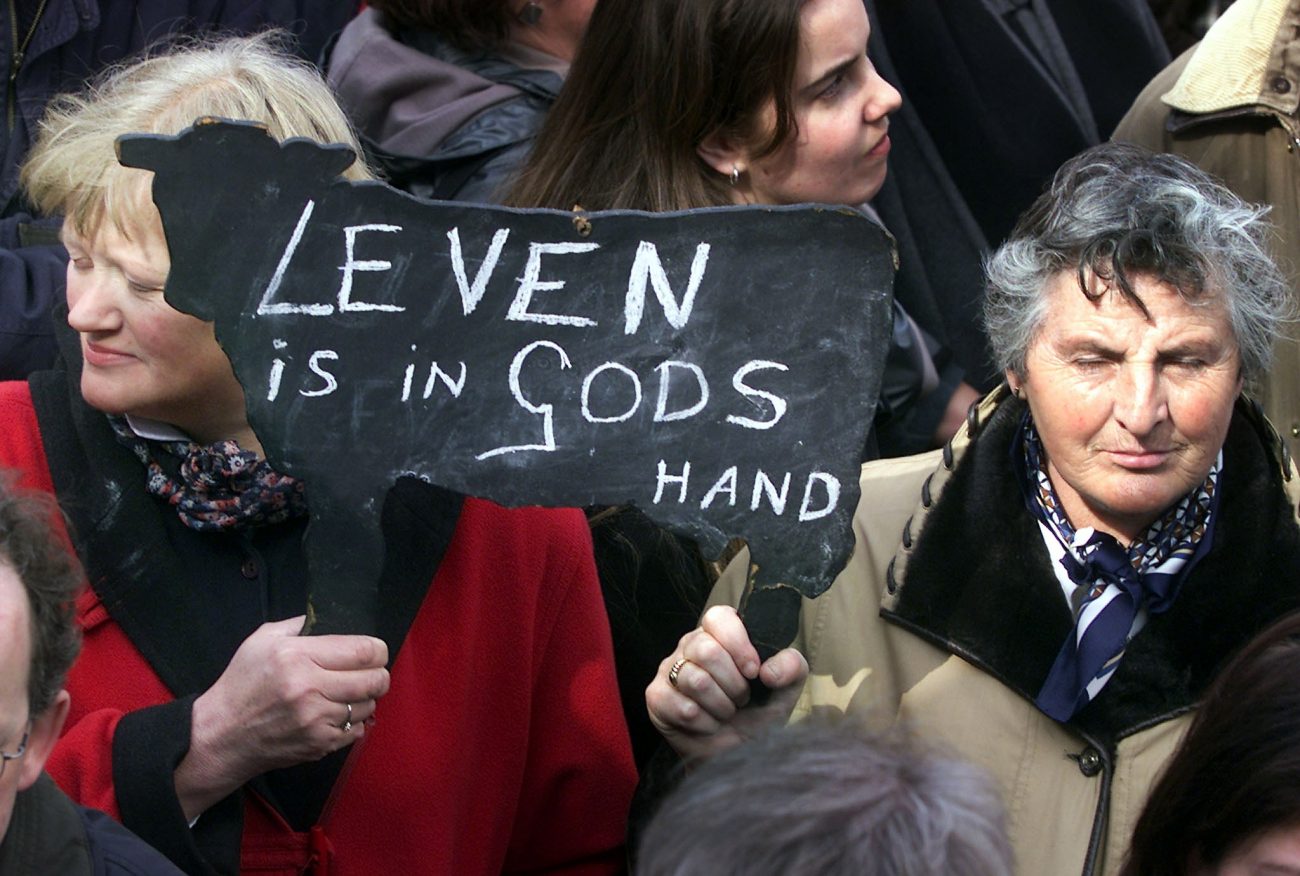 Women opposed to euthanasia are pictured in a file photo holding up a sign reading "life is in God's hands" during a silent demonstration in Den Bosch, Netherlands. Cardinal Willem Eijk of Utrecht, Netherlands, says the proposal to allow the euthanasia of children in the Netherlands would mark only the latest slide down the slippery slope of euthanasia. (CNS photo/Michael Kooren, Reuters)

MANCHESTER, England (CNS) — Proposals to amend Dutch law to allow the euthanasia of children represent the latest descent down the “slippery slope” of the killing of patients by doctors, a cardinal said.

The practice of euthanasia would continue to widen to include broader categories of people who would qualify for lethal injections, Cardinal Willem Eijk of Utrecht, Netherlands, predicted in an Oct. 23 email to Catholic News Service.

“This is perhaps not the last step in euthanasia, but may lead to other steps,” said Cardinal Eijk, a former hospital doctor.

“In the 1990s, euthanasia was also applied to psychiatric disorders and dementia. From the beginning of this century onward, it was applied to disabled newborns (children from birth until the age of 1 year), and soon also with children from 1 to 12 years old.”

“Those who perform active termination of life because of a certain form of suffering let go of the principle that life is an essential value,” he continued. “As a result, one will again and again be faced with the question of whether ending life with a lesser form of suffering should not also be allowable.

“The history of the euthanasia debate over the last 40 years shows that the criteria for performing euthanasia have been extended further and further,” he said. “Won’t the same thing happen in the long run with regard to euthanasia in children?”

In his written analysis, Cardinal Eijk noted that the forthcoming regulations will mean that, for the first time, euthanasia will be legally permissible in the Netherlands for people in every age category.

He said that when the regulations come into force, “people’s lives can be, under conditions, ended by doctors from conception and at any age without being punishable.”

“Then the circle is complete,” he said. “However, human life is an essential value from conception onward.

“Its value cannot, therefore, be weighed against anything else, such as a serious form of suffering due to illness or disability, not even in the case of children. Life-ending is therefore not a morally licit means of ending suffering.”

They would permit doctors to engage in “active life termination” of children ages 1-12 years old without prosecution as long as they follow criteria, such as establishing that the child is suffering unbearably.

The announcement came after government research concluded that palliative care was insufficient to ease suffering in five to 10 cases of terminally ill children each year.

In a letter to politicians, de Jonge said that a parliamentary bill would not be necessary and that policy updates would instead be introduced through the health and public prosecution services.

The Netherlands became the first country in Europe to legalize euthanasia since Nazi Germany when it introduced the Termination of Life on Request and Assisted Suicide (Review Procedures) Act in 2002 for freely consenting, terminally ill adults who were suffering unbearably.

Involuntary euthanasia has been since introduced for gravely ill infants under 1 year of age through the Groningen Protocol.

The practice was widened for 12- to 15-year-old children with the consent of their parents, while children over 16 can obtain euthanasia if they make a considered, voluntary request and their suffering is unbearable.

Increasingly, euthanasia has been expanded to psychiatric patients, alcoholics and dementia sufferers.

Numbers of people requesting euthanasia have also tended to increase incrementally year on year, and in 2019, more than 6,300 people died from a lethal injection, representing 4% of overall deaths in the country that year.

In July, Pia Dijkstra, chair of the Standing Committee on Foreign Affairs of the four-party coalition government, introduced a bill to allow healthy people over the age of 75 to die by assisted suicide if they were convinced their life was complete.