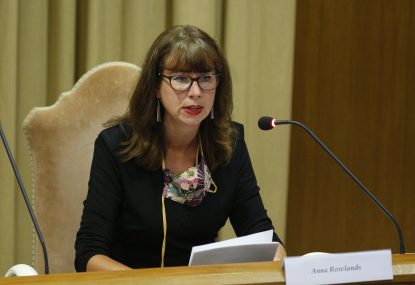 Anna Rowlands, professor of Catholic social thought and practice at the University of Durham, England, speaks at a press conference for the release of Pope Francis’ new encyclical, “Fratelli Tutti, on Fraternity and Social Friendship,” in the synod hall at the Vatican Oct. 4, 2020. (CNS photo/Paul Haring)

VATICAN CITY (CNS) — The pre-publication controversy over the title of Pope Francis’ new encyclical illustrates how the Catholic Church itself needs to engage in dialogue and listening, just like society does, said a theologian invited by the Vatican to help present the document.

Anna Rowlands, professor of Catholic social thought and practice at the University of Durham, England, told Catholic News Service, “We live in a world that is still structured by gender inequality, and the church has to wrestle with that as much as the world has to wrestle with it.”

The document, “Fratelli Tutti, on Fraternity and Social Friendship,” was released by the Vatican Oct. 4. The Vatican chose Rowlands and four men to present the document at a conference the same day.

The phrase “fratelli tutti” is taken from St. Francis of Assisi’s “sixth admonition” to the friars, all of whom were men. In Italian, “fratelli” means “brothers” or “brothers and sisters” since, like with many Romance languages, the masculine form of nouns is traditionally used when referring to males and females collectively.

Rowlands said the text itself makes it clear that the pope was speaking to all men and women. But with some Vatican officials and media outlets translating the title in English as “Brothers All” in the weeks before the text’s publication, many people urged the pope to adopt a clearly inclusive title. They suggested using a form of “fratelli e sorelle,” literally “brothers and sisters,” which is what the pope says when addressing large groups of people.

Andrea Tornielli, editorial director for the Dicastery for Communication, wrote Sept. 16 that “the formulation of the title in no way intends to exclude women, that is, more than half of the human race,” but is merely a direct quotation from the admonitions of St. Francis, and “the pope has obviously not changed it.”

Rowlands told CNS “one of the things that is so striking about the document is that it’s all about the power of naming,” of recognizing each other as “brothers, sisters, neighbors, friends — and those are scriptural namings, not just warm fuzzy ways of referring to each other.”

The document emphasizes how “we are brothers and sisters in the light of our common creation,” Rowlands said, and “that has a radical equalizing effect. And it means that’s a permanent binding: You know you can choose not to speak to your brother or sister, but they remain your brother and sister; it’s a lifelong, indissoluble bond.”

But living in the world, “there are structures of sin that blind us to our ways of relating,” she said. The document calls those out, for example, in how people relate to the poor, the elderly, people from other religions, and migrants and immigrants.

So, a key point in the text, she said, is the necessity of “dialogue and encounter,” of truly listening to the other’s experience and allowing it to challenge one’s way of thinking and acting.

The text makes clear how serious Pope Francis is about recognizing and understanding the structures of injustice in the world and “the way in which we break our relationships with each other,” Rowlands said. “And gender is part of that.”

Stopping at the title would be “too facile,” she said, but “there needs to be a dialogue — which is exactly what the document calls for — about the ways in which we relate to each other continues to be fragmented and broken.”

PREVIOUS: Papal encyclical outlines God’s call for all to live as brothers and sisters