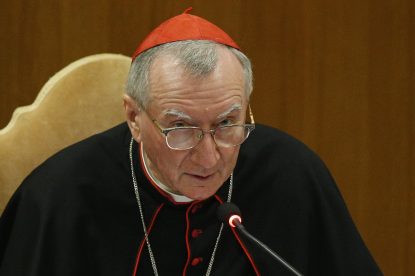 Cardinal Pietro Parolin, Vatican secretary of state, speaks at a press conference for the release of Pope Francis’ new encyclical, “Fratelli Tutti, on Fraternity and Social Friendship,” in the synod hall at the Vatican Oct. 4, 2020. (CNS photo/Paul Haring)

VATICAN CITY (CNS) — Pope Francis’ social encyclical sees the need for human fraternity as more than just an abstract concept, but as a concrete path toward peaceful coexistence in a world fraught by war, said Cardinal Pietro Parolin.

At the Vatican’s Oct. 4 presentation of the encyclical, “Fratelli Tutti, on Fraternity and Social Friendship,” Cardinal Parolin, Vatican secretary of state, said the document shows that “fraternity is not a trend or a fashion which develops over time or at a particular time, but rather is the result of concrete acts.”

“In fact, if weapons — and with them, wars — destroy human lives, the environment and hope to the point of extinguishing the future of people and communities,” he said, “dialogue destroys the barriers in the heart and mind, opens up spaces for forgiveness, and promotes reconciliation.”

Joining Cardinal Parolin to present the encyclical were: Cardinal Miguel Angel Ayuso, president of the Pontifical Council for Interreligious Dialogue; Judge Mohamed Mahmoud Abdel Salam, secretary general of the Higher Committee of Human Fraternity; Anna Rowlands, professor of Catholic social thought and practice at the University of Durham, England; and Andrea Riccardi, founder of the Community of Sant’Egidio.

In his address, Cardinal Parolin said that in today’s international climate, there is “an obvious contradiction between the common good and the tendency to give priority to the interests of states, even individual states.”

Citing the pope’s encyclical, Cardinal Parolin said the result of this contradiction is that “the multitude of the abandoned remain at the mercy of the possible goodwill of some.”

“Fraternity is the exact opposite of this,” he said. “It introduces the idea of general interests, those capable of forming a true solidarity and of changing not only the structure of the international community but also the dynamics of relationships within it.”

As the first Muslim presenting a papal encyclical at the Vatican, Abdel Salam noted the significance of the new document for promoting interreligious dialogue and praised the pope’s “ability to express the themes of human fraternity to the whole world.”

“It is an appeal to concord to a world in discord, as well as a clear message in favor of both individual and collective harmony with the laws of the universe, the world and life,” he said. “This notion relies on a clear reasoning that is rooted in the truth and is practicable in real life and in the real world.”

With its criticism of “ideologies imbued with selfishness and the loss of social sense,” the Islamic scholar said, the encyclical, along with the 2019 Document on Human Fraternity signed by Pope Francis and Sheikh Ahmad el-Tayeb, grand imam of al-Azhar Mosque, “will restart the train of history that had stopped at the station of this world order, and was rooted in unreasonableness, injustice, pride and colonial violence.”

“I hope that this encyclical, together with the Document on Human Fraternity, shall be a strong deterrent against falsehood in all its forms and expressions, and that it can be the basis, or the most important factor for the birth of a new world order that relies on the sacredness of dignity and human rights — as the pope said — not on contempt, slavery and the exploitation of man,” he said.

“At the same time,” he said, “I hope that this encyclical will reach the hands of politicians and decision-makers alike and enlighten them to lead the world out of the unreasonable state that it is living today.”

Rowlands noted that “this letter has its roots in a specific interfaith encounter” and seeks to rally action in the name of the truths proclaimed by faith, beginning with the truth that all people were created by God.

Faith is our wellspring,” she said. “It is part of how we can name and move beyond the grieving indifference of our age.” 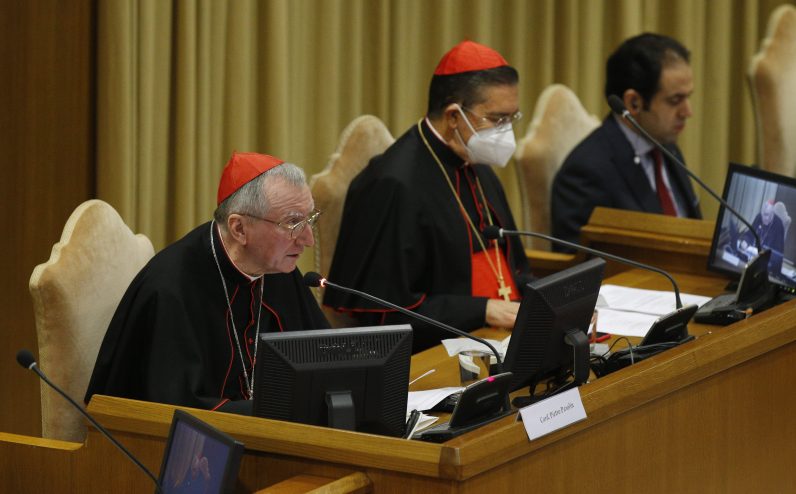 NEXT: Pope calls for politics to renew focus on the common good