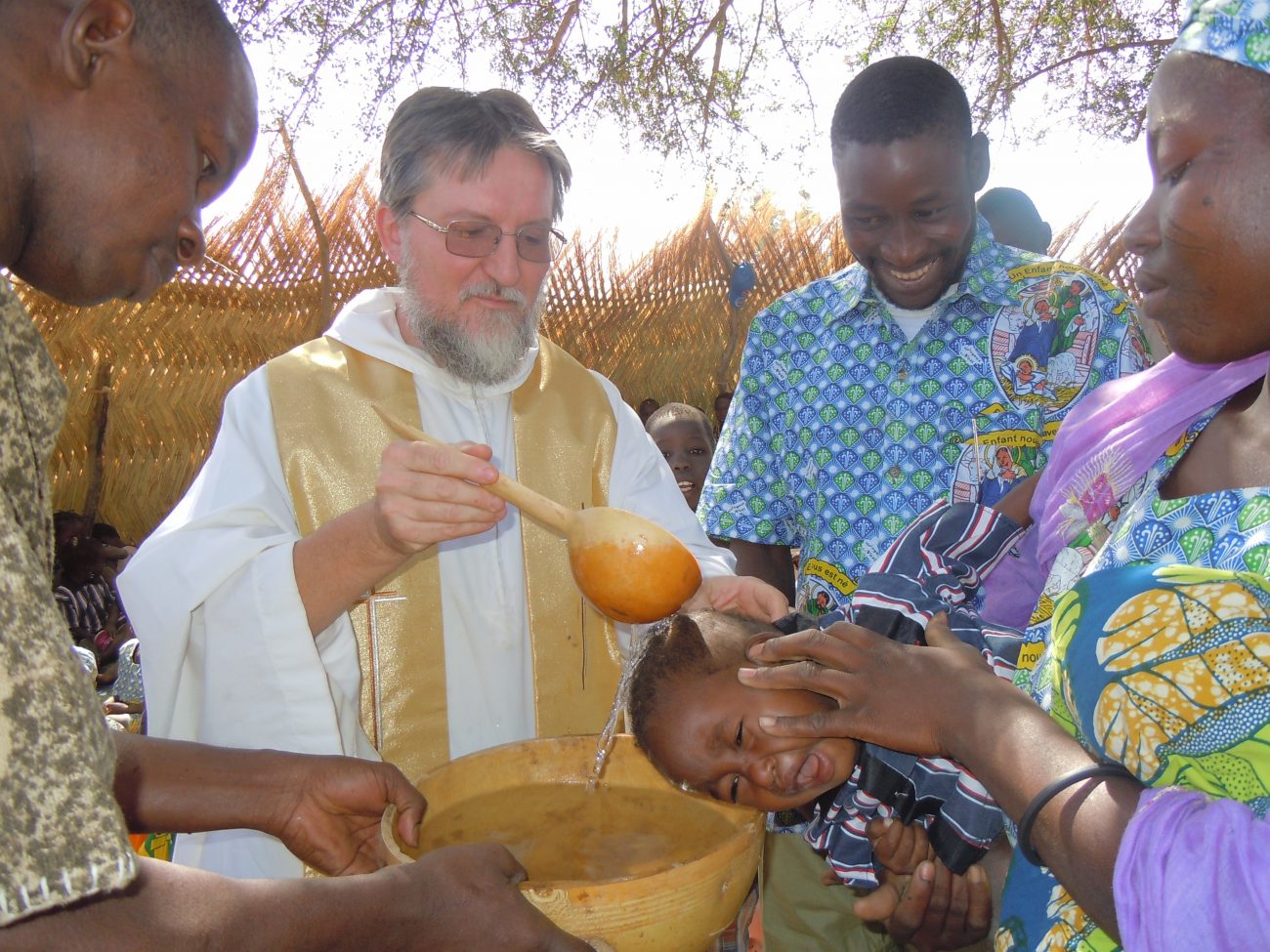 Father Pierluigi Maccalli, a member of the Society of African Missions, is pictured in a file photo baptizing a child in Bomoanga, Niger. Father Maccalli, a 59-year-old native of Crema, Italy, and and three other hostages were released in Mali after being kidnapped more than two years. (CNS photo/Raffaella Russitto, courtesy Society of African Missions)

VATICAN CITY (CNS) — With his feet chained during two years of captivity somewhere near the Sahara Desert, Father Pierluigi Maccalli said he found new hope on Pentecost Sunday as he huddled near a shortwave radio to listen to Mass celebrated by Pope Francis.

In an interview Oct. 15 with Fides, the news agency of the Congregation for the Evangelization of Peoples, Father Maccalli, a member of the Society of African Missions, remembered the joy he felt at hearing the first celebration of Mass since his kidnapping in 2018.

“To my great surprise, I heard Pope Francis in Italian; I put my ear closer and tuned the radio and I found myself at the beginning of the Pentecost Mass in communion with the pope, the church and the world. I said to myself, ‘Today I am in St. Peter’s Basilica in Rome and at the same time on mission in Africa,'” he said.

Father Maccalli was serving in a parish in Bomoanga, Niger, when militant extremists from Jama’at Nasr al-Islam wal Muslimin, a branch of al-Qaida in Mali, kidnapped him in September 2018.

His fate was unknown for nearly two years until a 23-second, proof-of-life video was released by the terrorist group in April.

Father Maccalli and three other prisoners were released Oct. 8 as part of prisoner swap mediated by the Mali government.

The Italian missionary said he was wearing only pajamas and slippers as his captors dragged him away from his parish.

“I had nothing, and I was seen as nothing by these jihadist Muslim zealots who considered me impure — ‘kafir’ — and condemned to hell,” he said.

His captivity in the desert, he continued, “was a time of great silence” in which he spent time reflecting on his life or silently reciting prayers his mother and grandmother taught him to pray. 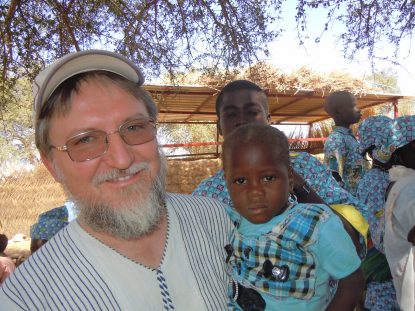 Father Pierluigi Maccalli, a member of the Society of African Missions, is pictured in a file photo with a child in Bomoanga, Niger. Father Maccalli, a 59-year-old native of Crema, Italy, and and three other hostages were released in Mali after being kidnapped more than two years. (CNS photo/Raffaella Russitto, courtesy Society of African Missions)

“Every day and especially every Sunday, I said the words of consecration, ‘This is my body which is given’ as bread broken for the world and Africa,” he said. “I asked for a Bible, but they would not give it to me.”

At other times, he found himself crying out to God and asking, “Where are you? Why have you abandoned me? Until when, Lord?”

Now that he is free, Father Maccalli said that finding out how people prayed for him and organized marches and called for his liberation made him realize that God was with him the entire time.

Recalling listening to the Mass on Pentecost Sunday, Father Maccalli said the pope’s words felt like “a breath of oxygen” that reminded him of “the motto of my priestly ordination from the Gospel of John: ‘As the father has sent me, I am sending you. Receive the Holy Spirit.'”

“After two years of spiritual drought and absence of the word of God, I felt reborn and I welcomed this gift as a breath of the Holy Spirit who wanted to push the radio waves to the Sahara. I tasted the Gospel and the words of the pope like never before,” he said. “They had a special flavor and taste in that context.”

Despite moments of trial, Father Maccalli told Fides that he didn’t doubt or regret the mission entrusted to him by God.

“My body was a prisoner of the sand dunes, but my spirit went to the villages, which I mentioned in my prayer,” he said. “And I also repeated the names of my collaborators and many people and young people that I carry in my heart, especially the malnourished and sick children that I took care of and so many faces that are a living presence in my wounded heart.”

Father Maccalli said he bore no ill toward his captors who, throughout his ordeal, “always respected me in general.”

“I still feel a lot of sadness about these young people indoctrinated by propaganda videos that they listened to all day long,” he said. “They do not know what they are doing! I bear no grudge against my kidnappers and jailers.”

Father Maccalli said he prayed especially for one his captors who drove him to the area where he was freed in October.

“As he drove us to the rendezvous point for our liberation, I said, ‘May God give us (the gift of) understanding one day that we are all brothers and sisters,'” the priest recalled.