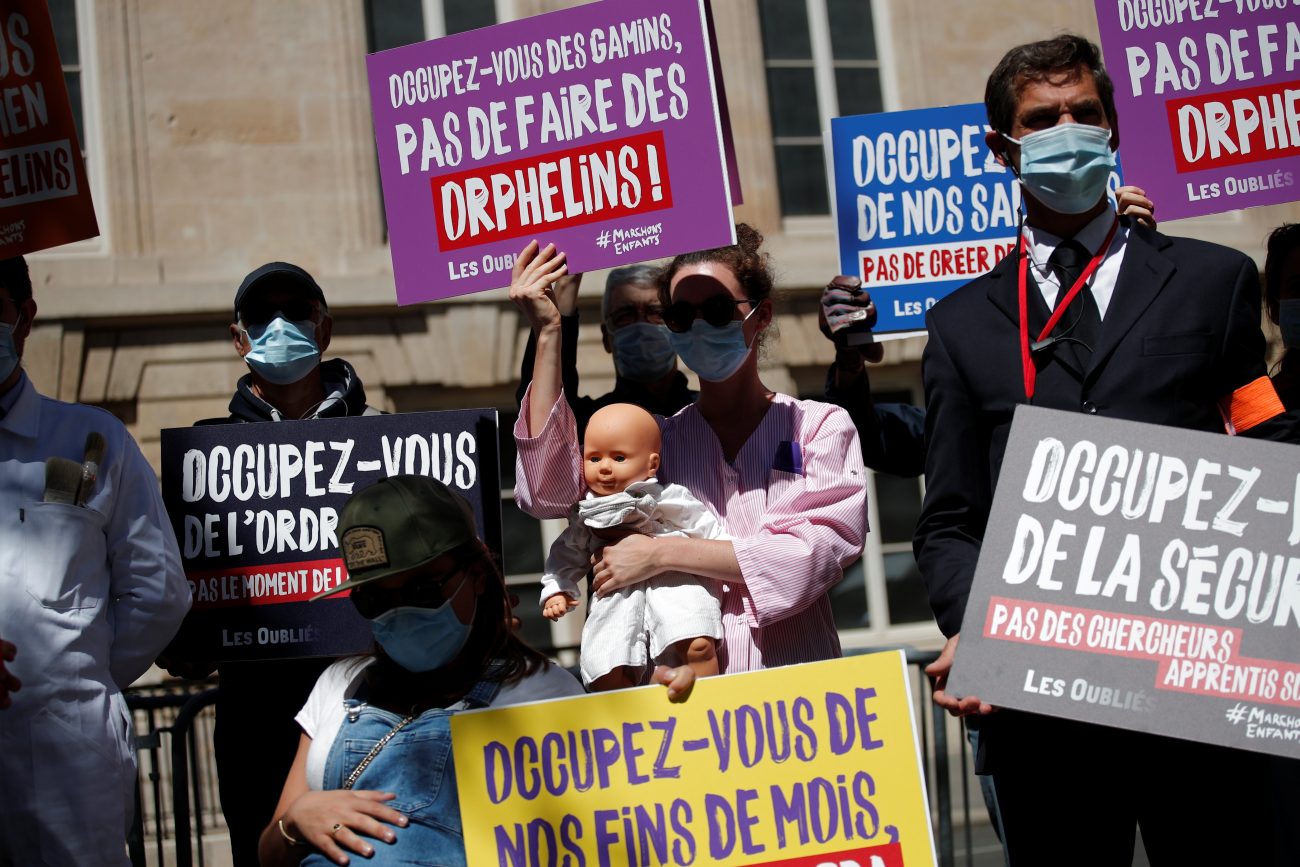 Members of "Protest for All" attend a 2019 demonstration against medically assisted procreation and surrogate motherhood in response to bioethics legislation at the National Assembly in Paris. (CNS photo/Benoit Tessier, Reuters)

PARIS (CNS) — The French bishops’ conference has urged Catholics to join mass protests against a government-backed bioethics bill that would liberalize abortion and embryo research and allow in vitro fertilization for lesbians and single mothers.

“Pressure is mounting on the National Assembly to further extend abortion terms under the guise of women’s rights and equality and to reduce filiation to a simple act of will by those wishing to become parents — a child is no longer received, but sought, produced and chosen,” said the conference’s 10-member Permanent Council.

“We invite all citizens, especially Catholics, to inform themselves about these matters and make their reservations and opposition known. Our society must not let itself be surreptitiously drawn along a dangerous path for humanity’s future,” it said.

The message was published Oct. 6 ahead of a nationwide weekend of demonstrations against the draft “Law Concerning Bioethics,” set to be cleared this fall for final enactment.

It said France’s Catholic bishops had long voiced concerns about the measure, which is widely expected to spur similar legislation in other countries, and counted on legislators to “take the subject seriously.”

It added that the bill, a flagship commitment by President Emmanuel Macron at his 2017 election, should be considered alongside the pope’s new encyclical, “Fratelli Tutti,” which called on the world “not to limit itself to a horizon of political and economic mechanisms, but choose fraternity with the poor.”

The bill, first adopted in October 2019, would allow abortions to term for women facing “psycho-social distress,” and authorize “savior siblings,” or embryos created for stem-cell treatment of older children.

Besides extending IVF rights, currently restricted to heterosexual couples diagnosed with infertility, the measure will also permit “shared motherhood,” in which a woman’s egg is placed in another’s womb.

In their message, the bishops said France already faced growing lawlessness in its cities, as Christian, Muslim and Jewish sites were desecrated, and people “mocked, sometimes attacked and even killed because of their real or supposed religious affiliation.”

“Fighting violence and monitoring behavior are undoubtedly necessary, but this will remain inadequate and powerless if we do not all work to build relationships of fraternity which give freedom and equality meaning,” the Permanent Council said.

“A culture of respect, mutual knowledge and acceptance of others does not grow through injunctions. … A deepening of faith goes hand in hand with greater openness of heart and mind.”