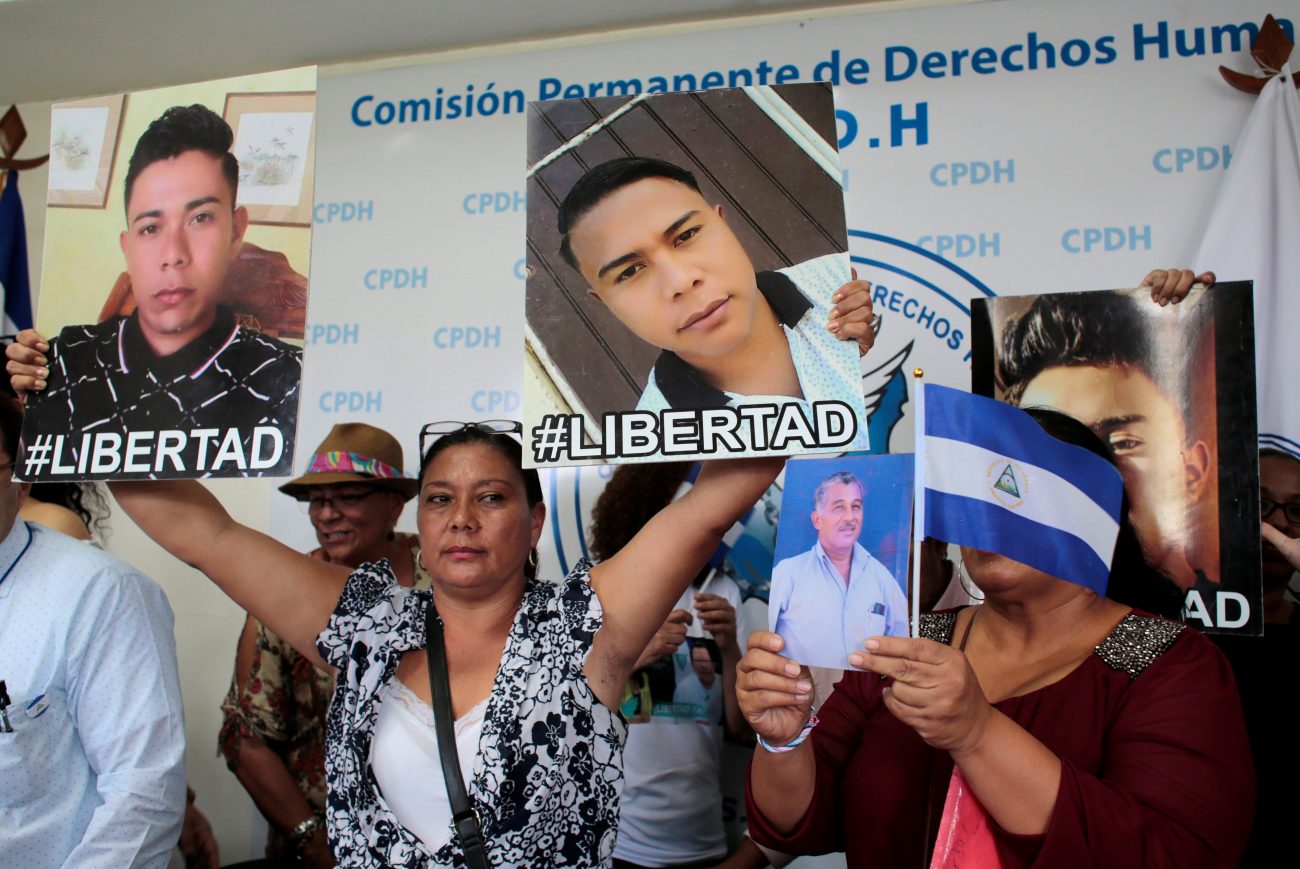 Relatives hold pictures during a 2019 news conference in Managua to demand the release of the demonstrators detained during 2018 protests against the government. (CNS photo/Oswaldo Rivas, Reuters)

MEXICO CITY (CNS) — Catholic leaders in Nicaragua have expressed alarm at several proposed laws that could prohibit groups and individuals from receiving foreign funding and further curtail freedom of expression in the Central American country.

Another proposal from the regime of President Daniel Ortega and his wife, Vice President Rosario Murillo, could impose life sentences on opponents.

Bishop Juan Mata Guevara of Estelí, president of the Nicaraguan bishops’ conference, called the proposals “disastrous” and used his homily during the Oct. 7 diocesan celebrations of the feast of Our Lady of the Rosary to decry rising lawlessness and attacks on opponents.

“The vice president spewed venom on Monday and repeated they will not allow any movement to put their family project in danger,” Bishop Mata said. “Tonight, I can only ask our heavenly father not to abandon us, to give us strength and determination to be able to save our homeland.”

The proposals mark the latest attempt at silencing opponents of the Ortega regime, which over the past two-and-a-half years has crushed protests, held political prisoners, harassed the media and forced thousands to flee the country. It also has acted as if the coronavirus pandemic did not exist and forced the church to close its COVID-19 prevention and treatment programs.

The church has faced repression — including attacks on clergy and places of worship and constant surveillance from police outside parishes — as it has tried to pay a mediating role, but has come to be seen by the regime as an opponent.

“The government views the church as an enemy, but the church is on the side of the people,” said Msgr. Carlos Aviles, Archdiocese of Managua spokesman. “We tell the truth and this angers the government.”

Church leaders saw a new wave of repression as elections loom in 2021, a vote they say is unlikely to be free or fair.

“The elections,” Msgr. Aviles said, would likely feature sham opposition parties — allied with Ortega — to allow the government to present its victory in 2021 as “legitimate.”

He added that one of the government proposals, the Regulation of Foreign Agents Law, potentially impacts Caritas, the church’s charitable arm, since it receives donations from abroad. Even though Caritas works on projects dealing with HIV patients, agriculture, water and feeding people, Msgr. Aviles said he feared its relationship with the church could cause issues for the government.

Other laws target the media outlets and journalists.

One of the proposals would require reporters working with foreign outlets to be registered as foreign agents with the government and not cover internal political matters, according to The Washington Post. Another proposal would establish prison sentences for anyone using a computer to spread “false and/or misrepresented information which causes alarm,” the Post reported.

Church officials expressed dismay with the attacks on the press, saying it would not lead to free or fair elections.

“It is unthinkable (to have) citizen participation without the necessary information provided by independent media, which is increasingly being harassed,” the Archdiocese of Managua’s peace and justice committee said in an Oct. 5 statement.

“I join the people of #Nicaragua in rejecting all attempts by the regime to prevent freedom of expression in our country. When people are silenced, they will always be subjugated. #NoNosCallarán,” Auxiliary Bishop Silvio José Baez of Managua tweeted Oct. 7, using the hashtag, “They will not silence us.”

Bishop Baez tweeted from Miami, having left Nicaragua in 2019 for safety reasons, at the urging of Pope Francis.

Bishop Baez told the German news organization Deutsche Welle earlier, “There is no space for fair, democratic and transparent elections with Ortega, Murillo and their repressive circle.”

NEXT: Finance measures meant to expel ‘merchants’ from the temple, pope says