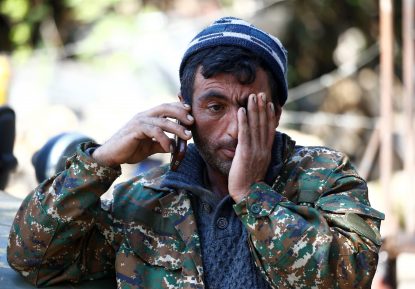 An ethnic Armenian volunteer soldier speaks on his cellphone in a street in Karmir Shuka, Azerbaijan, Oct. 16, 2020, during a military conflict between Armenia and Azerbaijan over the breakaway region of Nagorno-Karabakh. Turkey’s involvement in the conflict between Armenia and Azerbaijan and the subsequent targeting of Turkey’s Armenian citizens has put additional pressure on the Armenian minority there. (CNS photo/Reuters)

AMMAN, Jordan (CNS) — Turkey’s Armenian community says it is increasingly fearful about the reemergence of anti-Armenian sentiment in the country as conflict rages in the disputed territory of Nagorno-Karabakh.

Turkey’s military is supporting Azerbaijan in the conflict against Armenia.

“Any hate speech toward the Armenian people makes our own citizens an imminent target,” Garo Paylan, one of the few Armenian members of the Turkish parliament, said of recent verbal attacks on social media and state-run television as well as in newspapers.

Paylan is a descendant of Armenian genocide survivors and an outspoken critic of Turkey’s military support of Azerbaijan.

“Turkey is currently the only country that supports war, although it is a member of the OSCE Minsk Group, which is tasked with negotiating a settlement to the Karabakh conflict,” he recently told the Saudi daily, Arab News. “But Ankara has lost all neutrality in this process.”

“The government is using this conflict for domestic consumption. Armenian-origin citizens have become scapegoats, and the object of rising racism and hate speech,” Paylan said.

“The Armenians of Turkey have already been living with an internalized fear for decades, and this fear multiplies in tense times like this,” said Armenian history and culture writer Rober Koptas. Some 1.5 million Armenians and other Christians were victims of the Ottoman Turk expulsions and massacres between 1914 and 1923, events still denied by Turkey.

“And this is not a paranoid fear, it is based on many historical and current tangible examples and experiences,” Koptas told the online publication, Bianet.org.

“Over the last few weeks, Turkey’s involvement in the conflict between Armenia and Azerbaijan and the subsequent targeting of Turkey’s Armenian citizens has put additional pressure on the country’s Armenian minority, now numbering around 60,000, said Tugba Tanyeri-Erdemir, a research associate at the University of Pittsburgh’s Department of Anthropology and coordinator of the Anti-Defamation League’s Task Force on Middle East Minorities.

She added that the number reveals the huge decline from 2.4 million Armenians who lived across Turkey’s eastern Anatolia region before World War I.

Tanyeri-Erdemir and others addressing the Washington, D.C.-based U.S. Commission on International Religious Freedom Oct. 15 expressed serious concerns for religious freedom in Turkey and societal targeting of its religious minorities.

Analysts also point to recent acts of intimidation by Turkish nationalists taken against the Armenian community.

A convoy of Turkish nationalists stormed Istanbul’s Kurtulus neighborhood, home to a large Armenian population, Oct. 5. Photos posted on Twitter depicted Turkish and Azerbaijani flags draped on the roofs of their vehicles, blocking one of Istanbul’s main streets, their hazard lights flashing and horns honking erratically.

On Sept. 28, the day after fighting broke out in Nagorno-Karabakh, a similar convoy drove into Kumkapi, the Istanbul neighborhood where the Armenian Orthodox Patriarchate is located.

“The police could stop these convoys immediately, on the grounds that they are disturbing public order, but the fact that they managed to storm both Kurtulus and Kumkapi is evidence of how little the authorities care,” one observer told France 24 TV.

Paylan told Arab News it reminded him “of previous anti-Armenian pogroms. We have experienced this worrying trend for the past four generations.”

Ömer Çelik, spokesman for Turkey’s ruling party, said in a series of tweets the government would not let Turkey’s Armenian citizens be threatened.

Tanyeri-Erdemir and other analysts, however, point to several worrying trends seen in Turkey. They point to Turkish President Recep Tayyip Erdogan’s conversions of the famed Hagia Sophia, a UNESCO World Heritage Site, and Istanbul’s Church of St. Savior in Chora, into functioning mosques.

“The conquest mentality that has shaped the Turkish government’s Hagia Sophia policy not only puts the sacred history of Turkey’s religious minorities at risk, but also threatens their lives, making them potential targets,” said Tanyeri-Erdemir. “This climate of fear causes irreparable damage to interfaith coexistence and pluralism in Turkey.”

She said the actions made Turkey’s Christian minorities feel like “reconquered subjects and second-class citizens.”

Dominican Father Alberto Fabio Ambrosio, a specialist in the history of Ottoman Sufism, expressed concern to Catholic News Service over Turkey’s veer further into becoming an Islamic state under Erdogan.

“There is the idea to erase history. People cannot really erase history. And when politicians don’t realize that they are living the living history, tragedy is never really far,” warned Father Ambrosio, a professor of theology and history of religions at Luxembourg School of Religion and Society.

“Turkey’s involvement (in the Nagorno-Karabakh dispute) as a party that feeds violence is scary,” said Armenian writer Jaklin Çelik.

“The language of war and hate is not a good discourse,” she told Bianet.org.

PREVIOUS: Vatican gathers ambassadors to hear what is happening in Syria

NEXT: Pope accepts resignation of bishop accused of failing to act on abuse