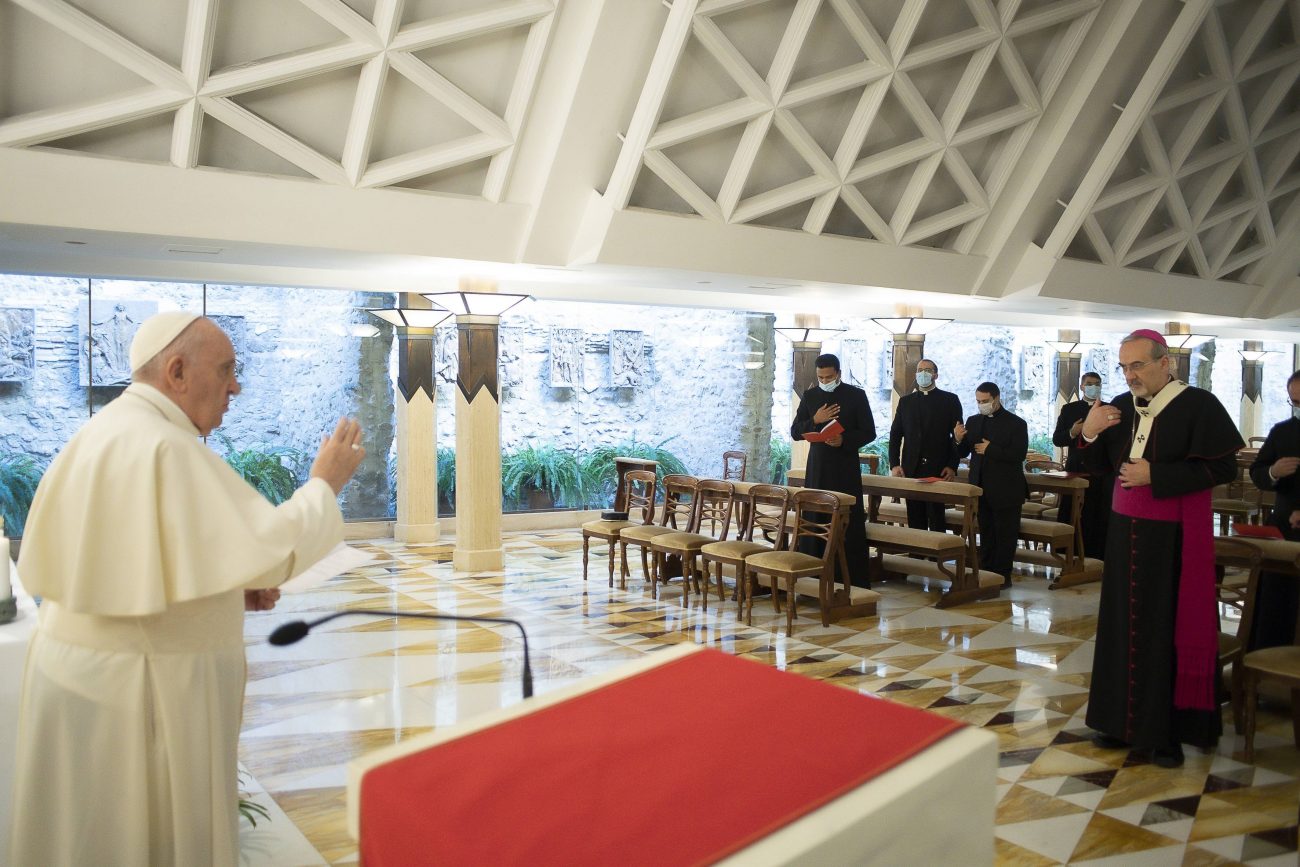 Pope Francis leads a ceremony to bestow the pallium on Archbishop Pierbattista Pizzaballa (pictured in the first row) in the chapel of the Domus Sanctae Marthae at the Vatican Oct. 28, 2020. The pope bestowed the pallium days after Archbishop Pizzaballa was appointed as the 10th Latin patriarch of Jerusalem. (CNS photo/Vatican Media)

JERUSALEM (CNS) — Pope Francis appointed Archbishop Pierbattista Pizzaballa as the 10th Latin patriarch of Jerusalem since the restoration of the patriarchate in 1847.

In an Oct. 24 announcement, the Apostolic Delegation of Jerusalem and Palestine said it welcomed the appointment, which came on the eve of the feast of the Blessed Virgin Mary, Queen of Palestine and on the centenary of the consecration of Palestine to Mary.

“Pope Francis, wishing to answer to the spiritual and pastoral needs of the Latin Patriarchate of Jerusalem, has provided it with a new Patriarch, as the Shepherd of the Latin community in the Holy Land,” the delegation said in its announcement.

During a private ceremony in the chapel of the Domus Sanctae Marthae Oct. 28, Pope Francis bestowed the pallium on Archbishop Pizzaballa.

The pallium is a woolen band symbolizing unity with the pope and authority over a portion of the Catholic flock. An archbishop wears it over his shoulders, reminding him and others that he is called to gently carry his sheep. Pope Francis blesses the palliums each year on the June 29 feast of Sts. Peter and Paul; the woolen bands usually are bestowed on the archbishop in his home country by the nuncio.

Archbishop Pizzaballa has served serving as the apostolic administrator of the Latin Patriarchate of Jerusalem since July 2016.

He was ordained a priest in the Franciscan order in September 1990 and came to Jerusalem one month later for studies and pastoral work. He completed his studies at the Studium Biblicum Franciscanum in Jerusalem in 1993 and went on to teach biblical Hebrew at the Franciscan Faculty of Biblical Sciences and Archeology there.

He began his service with the Custody of the Holy Land in 1999. In 2001, he was nominated as superior of the Sts. Simeon and Anne House of the Hebrew-speaking Catholic community of Jerusalem and became vicar of the Hebrew-speaking Catholic community in Israel in 2005. He served as custos of the Holy Land from 2004 to 2016. He was consecrated a bishop in September 2016.

In an Oct. 24 letter of greeting to Catholics, the new patriarch noted the importance of the word “stay,” which he said the pope had once again asked him to do by appointing him patriarch.

“It is the verb of mature patience, of watchful waiting, of daily and serious fidelity, not sentimental and fleeting. It is above all the Lord’s invitation to his apostles before the Ascension,” he said.

Though these are difficult times, the patriarch encouraged the faithful not to be discouraged by current challenges.

“All this, however, is teaching us painfully but, I hope, effectively, that man’s steps and rhythms must be more if he wants to save himself and the world,” he said.

“I therefore assure everyone of my will to serve each one, our people and our Church, to love them as much as possible with that same love of the Upper Room and Gethsemane, placing at your disposal what I am and what I have,” he added. “And I ask you to remain with me in the same availability, in the same decision.”

PREVIOUS: Pope calls for Poland to protect life amid protests over abortion law