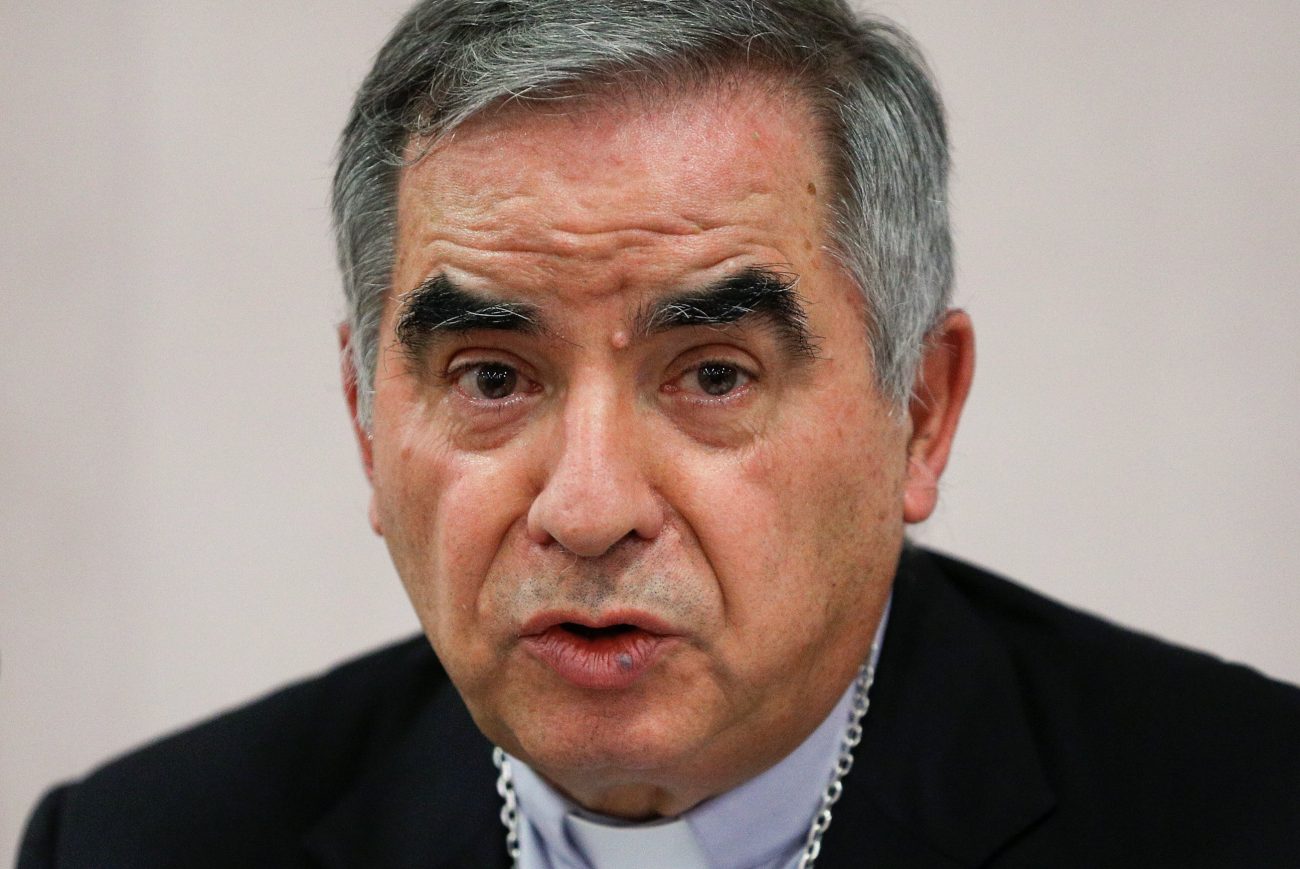 Cardinal Angelo Becciu speaks with journalists during a news conference in Rome Sept. 25, 2020, after he was asked by Pope Francis to resign as prefect of the Congregation for Saints' Causes. Cecilia Marogna, a political analyst allegedly hired as a security consultant by Cardinal Becciu, was arrested Oct. 13 by Italian authorities in Milan, media reported. (CNS photo/Guglielmo Mangiapane, Reuters)

Cecilia Marogna was arrested Oct. 13 on suspicion of embezzlement and misappropriation of funds by the Italian financial police after an international warrant was issued by Interpol at the Vatican’s request, according to reports.

She is expected to be extradited to Vatican City to answer the charges, the reports said. The Vatican has issued no statement on the arrest nor confirmed that it initiated the arrest warrant.

Cardinal Becciu, the former prefect of the Congregation for Saints’ Causes, was asked to retire Sept. 24 by Pope Francis. The cardinal said the pope mentioned allegations that he embezzled Vatican funds, diverting them to a charitable organization run by his brother.

Since then, Italian and international media have reported several questionable financial transactions the cardinal allegedly made with Vatican funds during the time he was “sostituto” — a position like chief of staff — in the Vatican Secretariat of State from 2011 to 2018.

According to several documents anonymously sent to the Italian news program, La Iene, the Vatican Secretariat of State sent an estimated 500,000 euros ($587,900) over a period of five years to a humanitarian organization in Slovenia run by Marogna, a Sardinian political analyst.

La Iene traveled to Slovenia to track her down, but her alleged “humanitarian organization” turned out to be only a mailbox at the address listed for the organization’s office.

“Everything said about me? All lies. Me, the cardinal’s lover? Absurd,” Marogna told Corriere della Sera Oct. 6, even though none of the accusations alleged a relationship between her and the prelate.

“I am a political analyst and an intelligence expert who works honestly and who pays rent while caring for my daughter,” she said.

She claimed that she was secretly hired by Cardinal Becciu, unbeknownst to the Vatican and the Secretariat of State, as a diplomatic back channel and that the money sent to her organization was used for humanitarian missions, including the paying of ransoms for kidnapped missionaries.

In an Oct. 14 interview with the Italian news site Domani, Marogna said she “used the money to do the work they asked me to do: create relationships and contacts in difficult countries. I wrote reports and analysis, as long as I was paid. I am not a swindler,” she said.

However, while the funds allegedly sent by Cardinal Becciu were labeled as “voluntary contribution for humanitarian mission,” La Iene reported that the money was instead used for purchases at several high-priced fashion boutiques, including Prada, Louis Vuitton, and Moncler.

When asked about the purchases by the Italian newspaper Corriere della Sera, Marogna said, “Perhaps the purses were for the wife of a Nigerian friend who could talk to the president of Burkina Faso.”

Nevertheless, Marogna denied being a “compulsive shopper,” and claimed that the money was used for “diplomatic trips, payments to information sources, mediations and bank transfers to humanitarian foundations.”

Cardinal Becciu denied any improper contact with Marogna, stating that all contact between him and the Sardinian political analyst were “exclusively regarding institutional matters.”