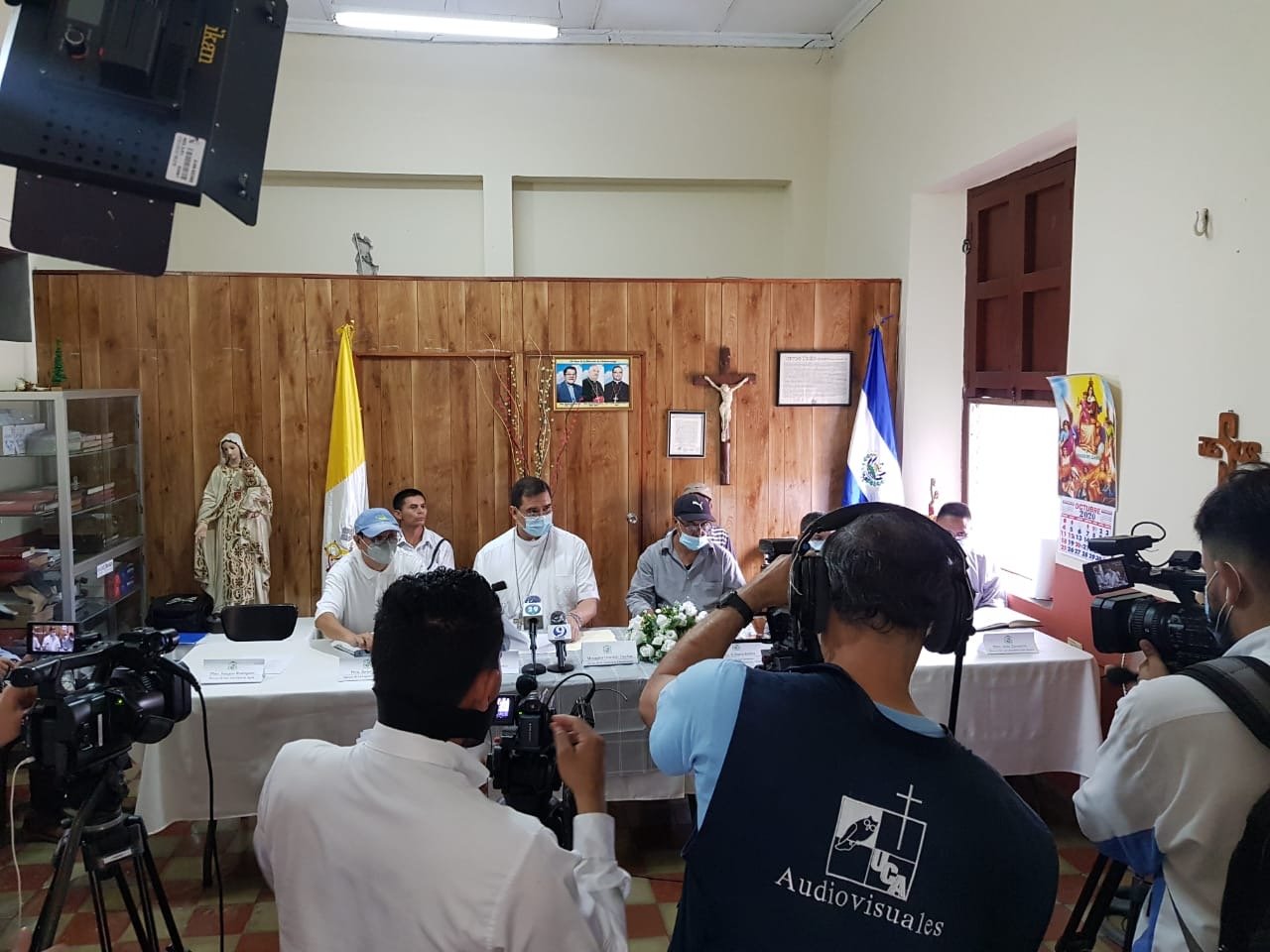 Members of the Diocese of Chalatenango, El Salvador, gather at a news conference Oct. 26, 2020, to speak in favor of farmers and families affected by increased government militarization in their region, which borders with Honduras. The diocese is asking the government for dialogue, particularly because the harvest of various crops is about to hit peak season, and it will hurt people already adversely affected by the economic consequences of the pandemic. (CNS photo/Courtesy of the Diocese of Chalatenango)

WASHINGTON (CNS) — Catholic leaders in northern El Salvador are speaking against the effects of increased government military presence along the country’s northern border with Honduras because of how it is affecting the free movement and livelihood of rural communities.

Soldiers along El Salvador’s region of Chalatenango, which borders Honduras, have been there since the time of a border dispute settled by an international court in The Hague in 1992, said Father Manuel Acosta, a professor at Central American University in San Salvador. Father Acosta is a priest for the Diocese of Chalatenango, the region affected.

“That presence was minor, but it doubled during the pandemic in March,” Father Acosta said in a WhatsApp message to Catholic News Service Oct. 27. “But around Oct. 20 (the military presence) became exaggerated, and they won’t let anyone through.”

In March, the Central American country closed its borders, including its airport, saying it was doing so to prevent those possibly infected with the coronavirus from entering through “blind spots” in the mountainous landscape of Chalatenango, which is about two hours north of the capital, San Salvador.

In September, the airport reopened, and so did official land border crossings, but soldiers have not left the “blind spots” in the area. Instead, their numbers have increased, and now the government is saying they will stay there to prevent narcotrafficking.

Local governments, many from political parties that oppose Salvadoran President Nayib Bukele, protested the move. The president, in turn, said the mayors involved were protecting “not only gangs but drug traffickers.”

The Central American University, in an October 23 op-ed on its website, said the president was “unashamedly exhibiting, once again, an ignorance of reality and the history of the country.”

“The same happened with Honduran citizens, whose houses were left on the Salvadoran side. Both (populations) live and work in the so-called ‘pockets,'” the editorial said. “They move between the two countries following the rhythm they have always had. They are communities characterized by government neglect. Only some institutions, including churches, and local government have tried to meet their needs.”

Because the increased militarization and new measures that came with it won’t let anyone through, the people who live in the “pockets” haven’t been able to tend to their crops or to see their families at home, the university said, and some of those crops that help them subsist, such as coffee, are about to hit peak harvest.

Without anyone to work the land, the crops could rot, which also could affect the rest of the population’s access to food, a priest from the Diocese of Chalatenango said during an Oct. 26 news conference. Farmers, the bishop and priests from the several of the municipalities affected also participated.

Bishop Oswaldo Escobar Aguilar of Chalatenango called on the government to engage in dialogue for a peaceful solution, saying the increased militarization is adversely affecting the poor. The president has the power to safeguard national territory, said Bishop Escobar, but the government shouldn’t “stigmatize all” who live in that area as being drug dealers, or in favor of them, particularly the agricultural workers trying to subsist.

“As a diocese, we’re not opposed to military presence in those spots along the border … as long as the constitution is respected and as long as the rights of others are respected, including being able to move about freely,” particularly to tend to crops, check their cattle, work in the fields, visit family across the border and attend church services closest to them, the bishop said.

The pandemic, loss of crops because of tropical storms and now the increased militarization are dealing a hard blow to poor families who already were struggling because of the pandemic. The diocese said it was not taking political sides, defending drug dealers or anyone involved in contraband or illicit activities, which are not as rampant in Chalatenango as in the rest of the country, but its interest was the well-being of agricultural workers and families of their region.

The diocese asked that the government look into issuing permits or other “binational documentation” that would allow those who have long peacefully worked and lived there to continue doing so.

In the United States, U.S.-El Salvador Sister Cities, a grassroots network of committees in dozens of U.S. cities that partners with communities in El Salvador, also issued a statement calling on the government to withdraw the extra soldiers, reestablish conditions “to guarantee the economic and social rights of the families affected by the territorial dispute between Honduras and El Salvador” and to end “the smear campaign directed from the presidency to the mayors of the area.”

The U.S. group also mentions how the region of Chalatenango suffered during the country’s 1980-1992 civil war, as it was the setting of constant government bombardment, massacres and disappearances of civilians during that time.

“We remind the president that these areas were the most affected by the civil war of the 1980s, where thousands of civilians were killed by the military. To date, the victims of the war and the families affected live in search of truth, reparation, justice and healing due to the trauma caused by the human rights violations perpetrated by the military forces,” said a statement released by the organization Oct. 26.

“We hold President Nayib Bukele and Minister of Defense René Merino Monroy directly responsible for the human rights violations in the area and for the psychological, physical and moral damage that they cause to the population.”

In early September, The Associated Press reported that a senior U.S. official had warned the country’s government that certain anti-poverty aid from the U.S. depended on “strict adherence to the rule of law and the protection of fundamental freedoms,” which some see as being at-risk given Bukele’s defiant stance against other branches of power in El Salvador.

In early February, Bukele sent heavily armed soldiers to the country’s legislative hall as they were arguing over the allocation of money for a project to better equip forces to fight the country’s gang problem.

NEXT: Pope to celebrate private Mass for All Souls at Vatican cemetery