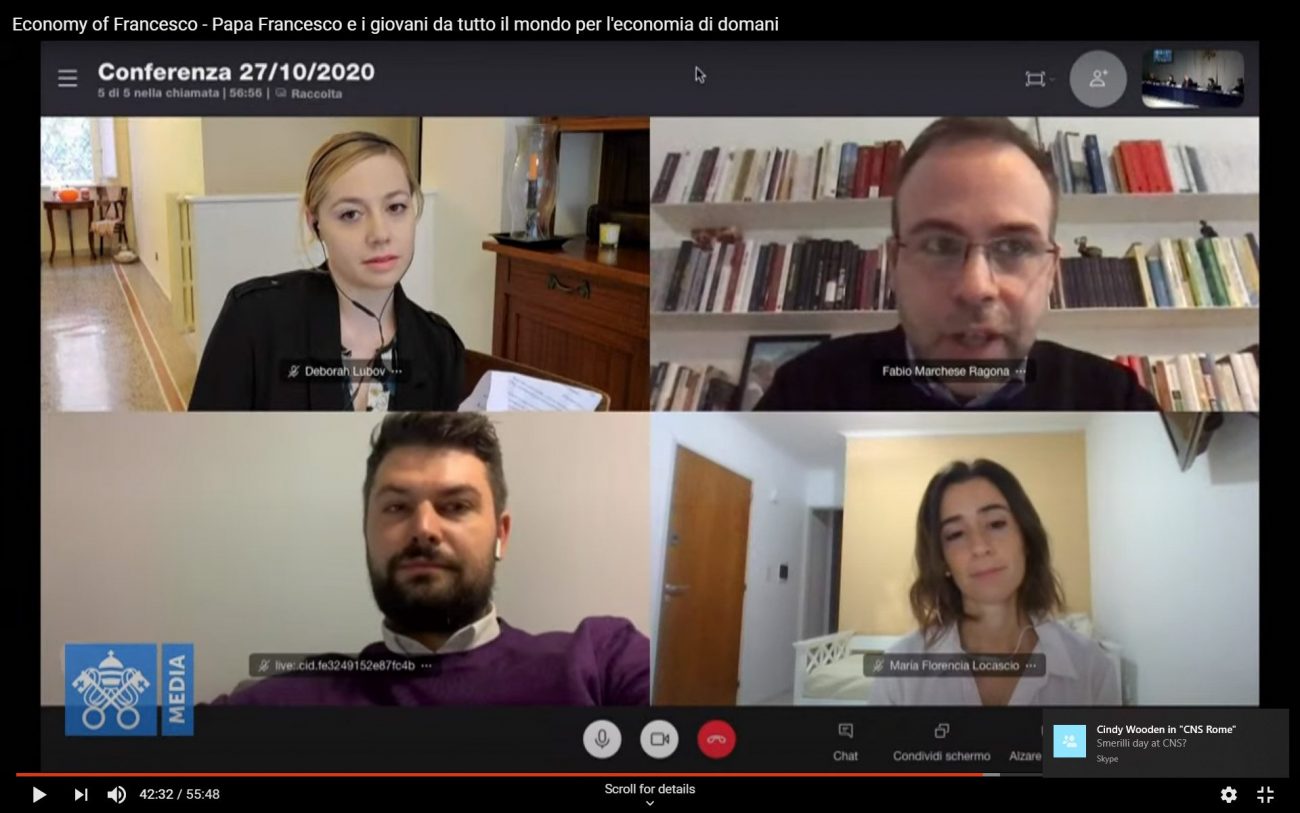 VATICAN CITY (CNS) — When the COVID-19 pandemic forced the cancellation of an international meeting of young economists and entrepreneurs with Pope Francis in Assisi, Italy, the young people went online.

They invited more of their friends to participate and, instead of brainstorming for three days in March, they have spent the past seven months working with older experts to take a deep dive into topics like: management and relationships; finance and the common good; work and caring for others and the earth; energy and poverty; women and economic sustainability.

The “Economy of Francesco” project is inspired by St. Francis of Assisi and his love for the poor and encouraged by Pope Francis and his conviction that the modern global economy is harming people and the environment.

The canceled March meeting has turned into a much larger online forum Nov. 19-21 that will include a video message from Pope Francis, moments of prayer and reflection from Franciscan sites in Assisi and a 24-hour marathon of presentations from young leaders in 20 countries around the globe.

Salesian Sister Alessandra Smerilli, an economist and member of the project’s scientific committee, told reporters Oct. 27 that when the COVID-19 pandemic flared in February, it seemed like the whole project would have to wait.

“But from the very beginning, it became clear that the young people were not going to just sit by and watch,” she said. “They were the ones who decided to keep working and to include this ‘variable’ in their reasoning,” looking at how the pandemic highlighted inequalities in the labor market and in access to health care, education and technology.

“Perhaps it is older people who have a harder time understanding that ‘no one is saved alone,'” as Pope Francis has said, because the young people are looking for “a collective response to this collective threat,” she said.

The young adults also have begun to discuss Pope Francis’ new encyclical, “Fratelli Tutti, on Fraternity and Social Friendship,” and its many passages calling for new models of caring, inclusion and, particularly, business practices focused on job creation and environmental protection.

Francesca Di Maolo, president of the Istituto Serafico in Assisi, a center offering services to people with severe disabilities, said she joined the organizing committee convinced that young professionals can help realize “the dream of a future without war, where no one is abandoned and, especially, of a new economy that is inclusive and enables everyone to participate.”

The idea, she said, is to tell the world that progress and development are real only when they benefit everyone and that the world can no longer afford “an economy that chooses which lives are worthy of being saved and which are not.”

The “economy of Francesco” obviously is an economy concerned about the environment, said Luigino Bruni, a professor of economic policy and another of the “seniors” facilitating the young people’s work. But “a ‘green economy’ is not enough to qualify as an economy of Francis. The inclusion of the poor, the commitment of the young and the cultivation of an interior life are all necessary.”

The current predominant economic model, he said, is “all external, it’s all based on exterior goods and, as such, has ignored too many invisible goods such as relationships and morals. Spiritual capital is the first asset many businesses are lacking, and we’ve seen and will continue to see the effects.” 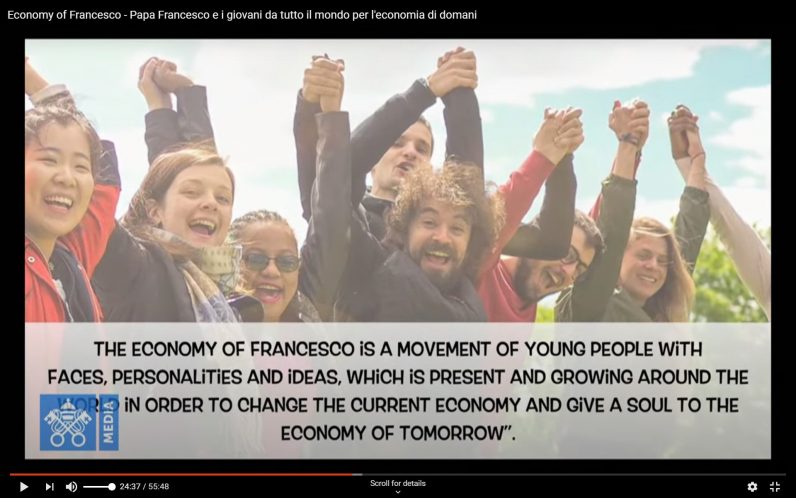 This screen capture of the Vatican News YouTube channel shows a video from an Oct. 27, 2020 online news conference about the Economy of Francesco forum set for Nov. 19-21. Young economists and entrepreneurs plan to meet online to discuss making the global economy more inclusive. (CNS photo/Vatican Media)