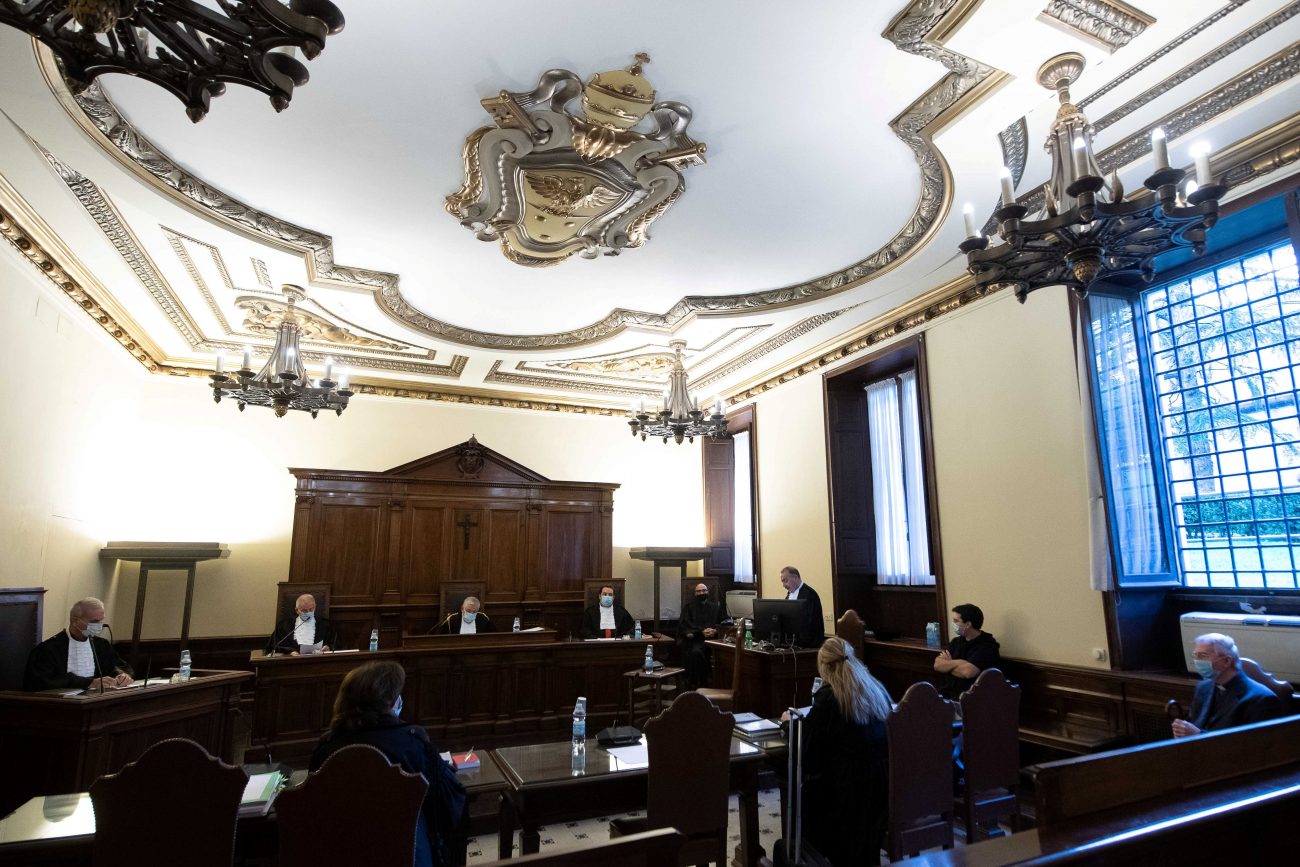 The Vatican City State criminal court is seen Oct. 14, 2020, during the opening of the trial of two Italian priests accused of sexual abuse at a minor seminary inside the Vatican. Father Gabriele Martinelli, 28, was accused of repeatedly sexually abusing a younger student at the seminary and Msgr. Enrico Radice, 71, former rector of the seminary, was accused of obstructing the investigation into younger priest. (CNS photo/Vatican Media via Reuters)

VATICAN CITY (CNS) — At a criminal trial involving alleged sexual abuse at a minor seminary located in the Vatican, the Vatican City State criminal court accepted a motion to allow the alleged victim to seek damages from the seminary and the religious institution that runs it.

Giuseppe Pignatone, president of the court, approved the motion Oct. 27, the second day of the trial against Father Gabriele Martinelli and Msgr. Enrico Radice. Pignatone also announced that the next session of the trial would be Nov. 19.

Msgr. Radice was rector of the St. Pius X Pre-Seminary, run by the Diocese of Como’s Opera Don Folci, at the time the alleged abuse occurred. The diocese, however, was not included in motion approved by the court.

Dario Imparato, the alleged victim’s lawyer, argued that as an entity charged with overseeing the minor seminary, the Opera Don Folci exhibited a “lack of vigilance” and “great negligence” regarding the abuses that allegedly occurred on their watch.

Although Vatican prosecutor Roberto Zannotti, as well as lawyers for Father Martinelli and Msgr. Radice, objected to the motion, Pignatone deliberated for nearly 30 minutes before announcing his decision that the request was “accepted and authorized.”

The Vatican has accused Msgr. Radice of hindering the investigation, including by lying to Vatican investigators in 2018 when he affirmed with absolute certainty that he had no knowledge of sexual acts ever taking place at the seminary while he was rector.

The alleged victim was present in the Vatican court, marking the first time he faced his alleged abuser in the courtroom. He is formally a civil party to the case.

Both priests also were present for the hearing. However, only Msgr. Radice was dressed in clerical attire while Father Martinelli wore a beige short-sleeved polo shirt with a blue sweater.