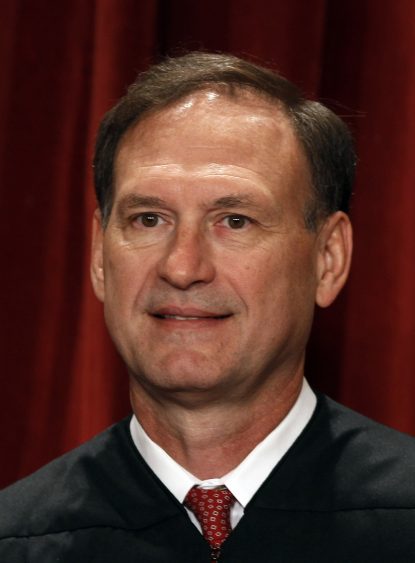 “It pains me to say this,” he said, but pointed to several recent trends, some recent court decisions as well as restrictions on houses of worship that states have put in place as part of their COVID-19 safety protocols.

He also pointed to increasing restrictions on the freedom of speech, which like freedom of religion is guaranteed by the First Amendment, and growing threats against the Second Amendment, which allows law-abiding citizens the right to bear arms for self-protection.

He spoke during the society’s annual National Lawyers Convention, held virtually this year because of the pandemic.

“The pandemic has resulted in previously unimaginable restrictions on individual liberty,” said Alito, one of six Catholics now on the court with the Oct. 26 confirmation of Justice Amy Coney Barrett. Alito was appointed by President George W. Bush in 2006.

“Notice what I am not saying or even implying — I am not diminishing the severity of the virus’ threat to public health. And putting aside what I will say shortly about a few Supreme Court cases, I’m not saying anything about the legality of COVID restrictions,” he said.

On the issue of religious liberty, there has been “a surprising turns of events” since the 1990s, Alito said.

In 1990, in the case Employment Division, Department of Human Resources of Oregon v. Smith, the Supreme Court ruled the state could deny unemployment benefits to a person fired for violating a state prohibition on the use of peyote, even though the use of the drug was part of a religious ritual.

The decision “cut back sharply on the protection provided by the free exercise clause of the First Amendment. Congress was quick to respond,” Alito said. “It passed the Religious Freedom Restoration Act, RFRA, to ensure broad protection for religious liberty. The law had almost universal support.

“In the House, the vote was unanimous. In the Senate, it was merely 97 to three, and the bill was enthusiastically signed by President (Bill) Clinton. Today that widespread support has vanished,” Alito continued.

“When states have considered or gone ahead and adopted their own versions of RFRA, they have been threatened with punishing economic boycotts,” he said.

He highlighted recent several cases that “illustrate this same trend,” including “the protracted campaign against the Little Sisters of the Poor … who have dedicated their lives to caring for the elderly, poor, regardless of religion.”

In July, the Little Sisters won relief from the U.S. Supreme Court, which sided with them in their nine years of litigation over the Obama-era contraceptive mandate.

In a 7-2 decision July 8, the court upheld regulations put in place by the Trump administration to allow employers, like the Little Sisters, more ability to opt out of providing contraceptive coverage in their health plans for moral and religious reasons.

The mandate originally had an exemption for houses of worship, and for religious employers it provided an accommodation whereby these employers could have a third party provide the coverage. But the Little Sisters also objected to the accommodation, arguing it still made them complicit in coverage they found morally objectionable.

Alito said in his keynote he is certain the Little Sisters will be in court again, because Justice Elena Kagan in a separate dissenting opinion left the door open  for Pennsylvania and New Jersey to file another suit against them again challenging their exemption.

The Little Sisters “have been under unrelenting attack for the better part of a decade” for refusing to cover contraceptives for their employees, despite the fact no employee, Alito added, has claimed they have been harmed by that decision.

He cited two other religious freedom cases — one involving a pharmacy in Olympia, Washington, that refused on religious grounds to stock the so-called “morning after” abortion pill and the Colorado cake maker who refused to make a wedding cake for a same-sex couple.

In each situation, he said, customers were referred to nearby outlets that would accommodate their needs, so they were not denied what they sought — but the pharmacy and cake baker were still taken to court.

“For many today, religious liberty is not a cherished freedom,” Alito said. “It’s often (seen as) just an excuse for bigotry, and it can’t be tolerated, even when there is no evidence that anybody has been harmed.”

Regarding COVID-19 restrictions, Alito again emphasized he was not diminishing the pandemic’s seriousness but pointed to two applications the Supreme Court received over the summer to stay COVID-19 restrictions he said blatantly discriminated against houses of worship — from California and Nevada.

“In both cases, the court allowed the discrimination to stand,” he said. “The only justification given was that we should defer to the judgment of the governors because they have the responsibility to safeguard the public health.”

Alito also said freedom of speech is “in danger.”

“Even before the pandemic, there was growing hostility to the expression of unfashionable views,” he said.

One such “unfashionable” view is support for traditional marriage between one man and one woman, he said.

Since the court’s 2015 Obergefell v. Hodges decision legalizing same-sex marriage, those who express support for traditional marriage in public “risk being labeled as bigots and treated as such by governments, employers and schools.”

“Attendance at speeches, lectures, conferences, conventions, rallies, and other similar events has been banned or limited. And some of these restrictions are alleged to have included discrimination based on the viewpoint of the speaker,” he noted.

“One of the great challenges for the Supreme Court going forward will be to protect freedom of speech,” he said, and “prevent it from becoming a second-tier constitutional right.”

Alito said in the minds of some, “the ultimate second-tier constitutional right … is the Second Amendment right to keep and bear arms.”

Until its last term, the court had not taken a Second Amendment case since 2010. That year in a 5-4 ruling in McDonald v. Chicago, the court upheld the constitutional right of an individual to “keep and bear arms”; Alito wrote the majority opinion.

In its 2019-2020 term, the court took up a challenge to a New York City ordinance that made it difficult for a law-abiding resident to comply with a requirement that to get and keep a license to own a gun in the home for self-defense, the owner had to visit a shooting range.

The city prohibited gun owners from going to a range just outside the city, but inside the city, the only ranges were for members and their guests.

New York changed the ordinance somewhat and asked the court to dismiss the case, which it initially refused to do.

In a brief that five U.S. senators filed in support of the city, they wrote that “the Supreme Court is a sick institution” and if it “did not mend its ways, well, it might have to be, quote, ‘restructured,'” Alito said.

A majority of the justices held the case was moot and “said nothing about the Second Amendment,” said Alito; he and two other justices objected to the decision.

“I’m not suggesting that the court’s decision was influenced by the senators’ threat,” he said, but the episode “may provide a foretaste of what the Supreme Court will face in the future.”