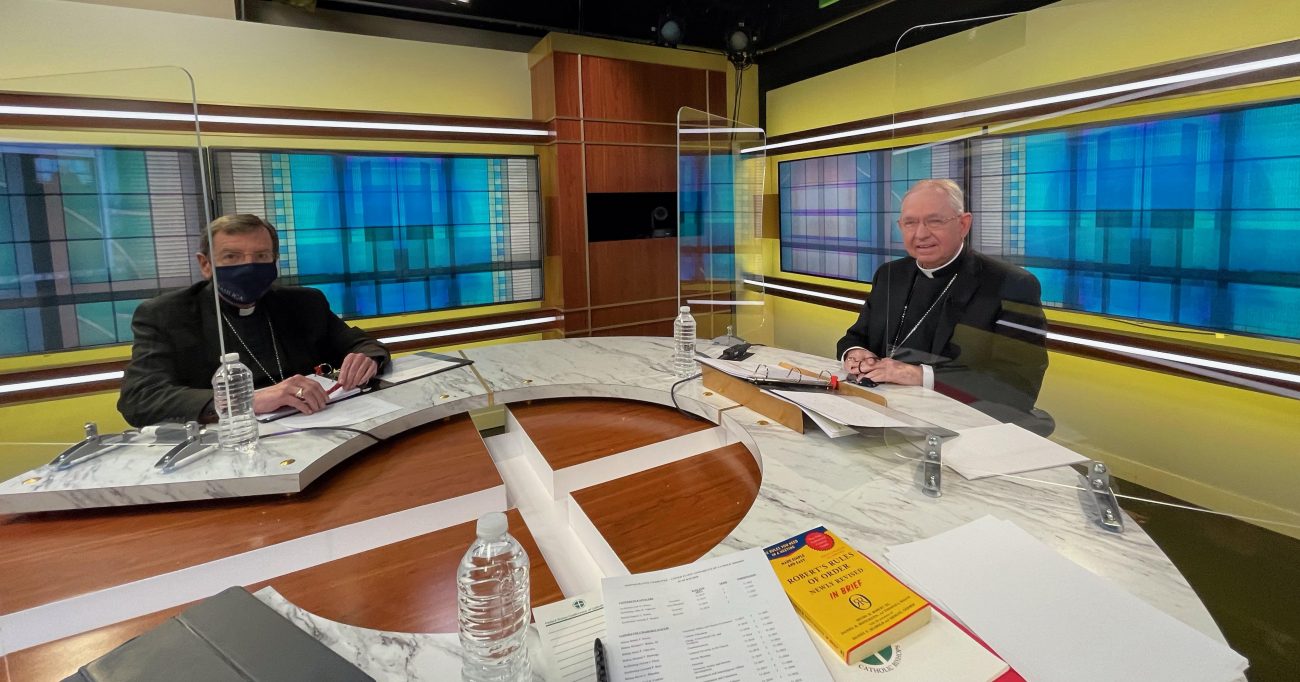 Detroit Archbishop Allen H. Vigneron, vice president of the U.S. Conference of Catholic Bishops, and Los Angeles Archbishop José H. Gomez, USCCB president, are pictured in the studio at USCCB headquarters in Washington Nov. 16, 2020. They were in the studio for the bishops' fall general assembly, convened virtually due to the coronavirus pandemic. (CNS photo/Msgr. J. Brian Bransfield)

WASHINGTON (CNS) — The two days of the virtual assembly of the U.S. Catholic bishops, Nov. 16-17 initially included discussion of the Vatican report on former cardinal Theodore E. McCarrick. But the bulk of the bishops’ conversation focused on the ongoing pandemic and the church’s response to racism.

The meeting concluded with reaction to the presidential election, as Los Angeles Archbishop José H. Gomez, president of the U.S. Conference of Catholic Bishops, announced formation of a working group to address various issues of top importance to the church with the new administration of President-elect Joe Biden.

The assembly, which usually takes place in Baltimore, was virtual this year due to COVID-19 restrictions and the public sessions were livestreamed. About 300 bishops logged on, and for the most part, they crossed the technological hurdles of making sure their individual responses came through on the teleconference format.

The main topic Nov. 16, added late to the bishops’ agenda, was discussion on the Vatican report on McCarrick, released less than a week before, on Nov. 10.

Bishop Joseph E. Strickland of Tyler, Texas, said the report which described McCarrick’s ascent to highest rungs of the church, even amid rumors of abuse, read like a list of the seven deadly sins.

“It’s very clear that there’s still very much a tendency in the world and in the church to turn a blind eye to many of these sins,” he added during the 45 minutes of discussion about the long-awaited 460-page report.

“It really has been a watershed moment,” he said. “And something that we should continue to study and read.”

The cardinal also stressed the need to “make sure that we never again have a situation where anyone from our conference is taking sides in this, with the Holy Father or challenging him or even being with those who are calling for his resignation. That kind of thing really has to cease, and the Holy Father pointed the way in which we take up this initiative together in a collegial manner.”

He said the more “that we listen to victims and make it public that we’re meeting with victims, as the Holy Father does on a regular basis, the word will get out there that we are on the side of victims. And we have to continue to do that.”

The McCarrick report also overlapped into other parts of the meeting. In his opening address, Archbishop Gomez paused at the start to remember the children and adults within the church who are victim-survivors of clergy sexual abuse.

Acknowledging the McCarrick report, he also expressed “deep sorrow” and offered prayers the victim-survivors “might find healing and hope.”

The archbishop also pointed to the ongoing suffering caused by the coronavirus pandemic, noting that people’s faith in God “has been shaken” by the pandemic and related economic turmoil, and he urged the church leaders to help people navigate this enormous challenge.

The current times, with social unrest and uncertainty caused by the pandemic, “call for heroic Christianity,” he explained. In response, he said: “We need to continue to form and empower missionary disciples, as Pope Francis calls us to do.”

Archbishop Christophe Pierre, the papal nuncio to the United States, also spoke about the pandemic, as one of the “dark clouds” looming over today’s world.

“Our mission is to heal the world. … I encourage you during your meeting to look at ways that you can feed your hope and that of your flock,” he said.

In a 45-minute discussion about the pandemic Nov. 17, several bishops spoke about parishes livestreaming Masses and their efforts to keep in touch with parishioners, particularly the elderly, and learning how to help people access food and other basic necessities.

They also spoke of the spiritual lessons that have occurred, saying there has been a renewed desire among Catholics for the Eucharist.

Bishop Daniel E. Flores of Brownsville, Texas, said he has arrived at parishes to see people kneeling outside, praying for the chance to receive holy Communion and the return of normal worship experiences.

“This is the renewal that I find very personally edifying and a source of great strength,” he said.

Several bishops said such yearning for the Eucharist presents an opportunity for the church to begin a new effort of evangelization and catechesis as the public celebration of Mass gradually expands and church leaders determine how best to encourage people to reengage in parish life.

In a practical response to the pandemic, the bishops approved a budget for the year 2021 that took into consideration the economic impact of the coronavirus.

Bishop Gregory L. Parkes of St. Petersburg, Florida, USCCB treasurer and chairman of the USCCB Committee on Budget and Finance, said the USCCB had started trimming budget outlays in 2020 when it appeared the coronavirus pandemic was going to stay far longer than expected. One such measure was a pay freeze and travel restrictions for all USCCB employees.

Due to “consideration for the pressures each of us face in the dioceses,” he said no assessment increase is being proposed for 2022.

In another action related to the pandemic and to the ongoing discussion nationwide on about racial inequality, the bishops approved addendums to their four-year strategic plan addressing the impact of these issues. The plan, adopted a year ago, will go into effect in January 2021.

Continuing their look at the sin of racism, the bishops approved the renewal of the Ad Hoc Committee Against Racism for three more years.

They also discussed, Nov. 17, their efforts to address racism in their dioceses.

Bishop Shelton J. Fabre of Houma-Thibodaux, Louisiana, and chair of the USCCB’s Ad Hoc Committee Against Racism, reminded the bishops that when they approved their pastoral on racism two years ago, they had no idea how the nation would have such a reckoning with racial inequality as it has experienced this past summer.

He said the document, among other things, “unequivocally declares that racism is a life issue.”

It certainly was a life issue for Bishop Mark J. Seitz of El Paso, Texas, who recalled how a racially motivated mass shooting in his diocese last year left 23 people dead and as many injured.

“It really brought home the fact that white supremacy is not a harmless fringe ideology but that it is death-dealing ideology,” said Bishop Seitz, “and it also reminded us that words matter. Words that denigrate immigrants and other people of color really matter and feed into these ways of thinking.”

Archbishop Mitchell T. Rozanski of St. Louis said he has spent time meeting and listening with various groups and also took a tour of Ferguson, Missouri, and stopped and prayed where 18-year-old Michael Brown was fatally shot by police in 2014.

He said changing hearts when it comes to racism “is one of the biggest challenges,” but it’s important as Catholics to “plant the seed and leave it to the Holy Spirit.”

Initially, the bishops did not address the presidential election, except when Archbishop Gomez, responding to a reporter’s question during the Nov. 16 news conference, said the USCCB’s congratulations to Biden was just an acknowledgment and that he and his fellow bishops “respect the election process.”

At the close of the two-day meeting, Archbishop Gomez said several bishops had come to him with concerns in the wake of the election.

“We are facing a unique moment in the history of our country,” he said, noting the election of a Catholic president “presents certain opportunities but also certain challenges.”

The archbishop said the president-elect “has given us reason to believe his faith commitments will lead to certain policies that we favor,” listing immigration, aid to refugees and the poor, racial justice, capital punishment and climate change among them.

He also said there is the expectation that Biden “will support policies that are against some fundamental values we hold dear as Catholics,” such as a possible repeal of the Hyde Amendment, which prevents the use of federal funds to be used for abortions, and the codifying in law of Roe v. Wade, the Supreme Court decision which legalized abortion.

When politicians who profess the Catholic faith support these policies, the archbishop said, it “creates confusion among the faithful about what the church actually teaches.”

For that reason, he said, he was forming a working group led by Archbishop Allen H. Vigneron of Detroit, USCCB vice president, which will address issues surrounding the election of a Catholic president and policies that may come about that would be in conflict with Catholic teaching and the bishops’ priorities.

The bishops had election results of their own in this meeting. Msgr. Jeffrey D. Burrill, a priest of the Diocese of La Crosse, Wisconsin, was elected the new general secretary of the USCCB, succeeding Msgr. J. Brian Bransfield.

In another vote, Cardinal Timothy M. Dolan of New York was elected chairman of the bishops’ Committee for Religious Liberty.

The bishops also voted on chairmen-elect for seven committees and seven seats on the board of directors of Catholic Relief Services.

NEXT: Bishops air feelings, solutions to prevent another ‘predator’ in their midst