Bishops air feelings, solutions to prevent another ‘predator’ in their midst 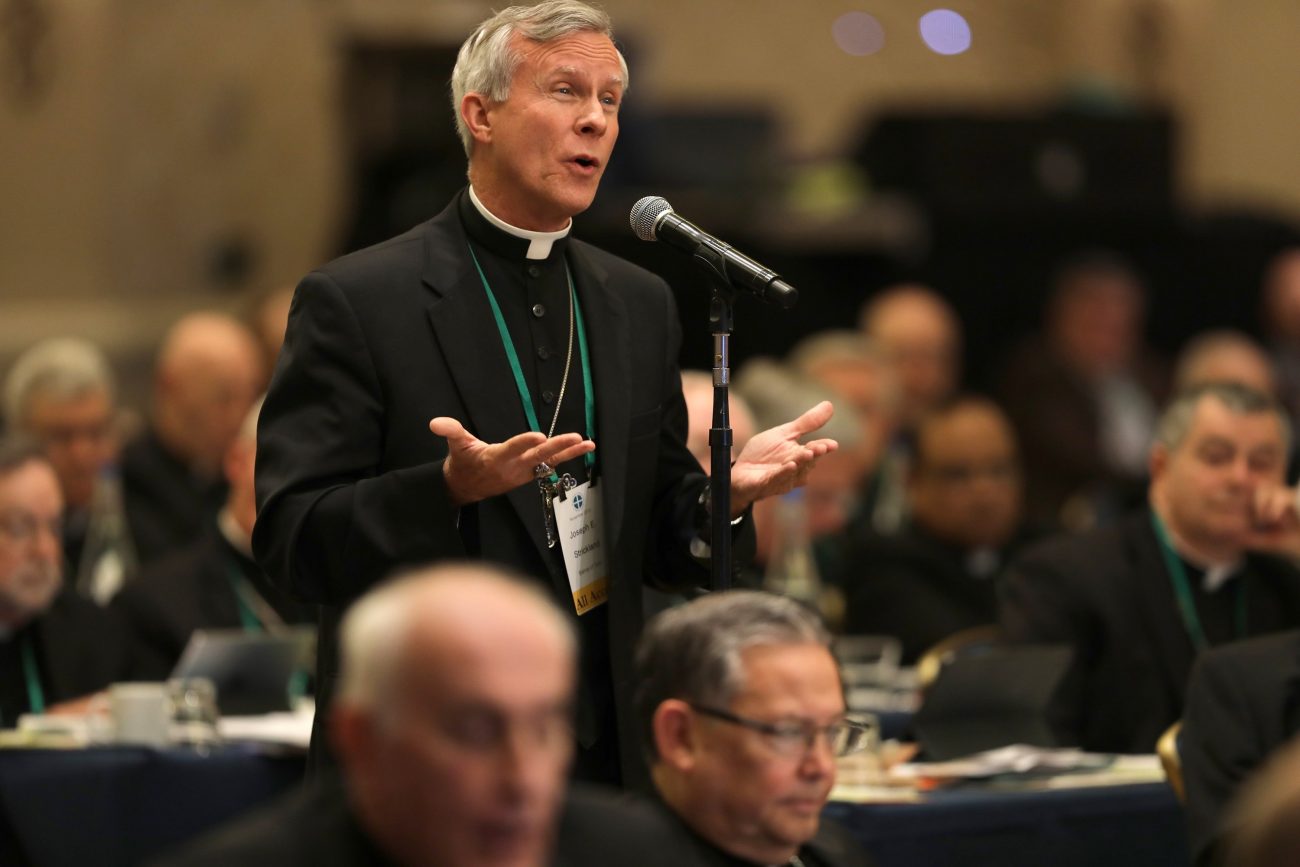 Bishop Joseph E. Strickland of Tyler, Texas, speaks from the floor during the fall general assembly of the U.S. Conference of Catholic Bishops in Baltimore Nov. 11, 2019. (CNS photo/Bob Roller)

WASHINGTON (CNS) — Bishop Joseph E. Strickland of Tyler, Texas, said the recently released report on former cardinal Theodore E. McCarrick, describing his ascent to highest rungs of the church, even amid rumors of abuse, read like a list of the seven deadly sins.

“Lust, greed, gluttony, wrath, sloth, envy, pride — pretty much the report covers all of them,” said Bishop Strickland, during the more than half hour the U.S. Conference Catholic Bishops allowed the prelates Nov. 16 to discuss the report released by the Vatican Nov. 10.

It was the first time the U.S. prelates as a group discussed the findings of the investigation of one its own after its long-awaited release.

The session was part of the first day of the U.S. bishops’ annual fall general assembly held online Nov. 16 and 17 this year because of the pandemic.

“I think we need to, really, as pastors acknowledge that we’re all sinners and we’re all called away from sin,” but the report shows sometimes pastors and others can turn a blind eye to sin, Bishop Strickland said. “I think that could be the title of the report.”

In 460 pages, the report showed how laity, seminarians and even prelates over decades made an effort to call attention the church’s hierarchy to, in writing and sometimes verbally, incidences of abuse on the part of McCarrick.

The report details how one mother said she wrote several letters to church leaders about her misgivings and how McCarrick touched her sons; seminarians and young priests said they told bishops about inappropriate touching and sexual incidents instigated by McCarrick; and even a past archbishop of New York, Cardinal John J. O’Connor, wrote a lengthy letter to the papal nuncio to the United States at the time about McCarrick sharing the same bed with younger men. Yet, McCarrick still became a cardinal.

“It’s very clear that there’s still very much a tendency in the world and in the church to turn a blind eye to many of these sins,” said Bishop Strickland of McCarrick, now laicized and whose whereabouts are not publicly known since he left a Capuchin friary in Kansas earlier this year.

Bishop Michael F. Olson of Fort Worth, Texas, mentioned that the people and organizations to whom McCarrick gave money were not named in the report, nor were the amounts of money. He also thanked survivor James Grein for coming forward with his account of abuse at the hands of the former cardinal.

“It’s curious to wonder what McCarrick would be doing today if he (Grein) had not come forward,” Bishop Olson said.

Bishop Olson said transparency about the financial gifts is important because “we have to give an accounting to the faithful for this. We have to respond to their questions, and this is one of several issues that they are asking. And, I hope that we can discuss this during the session, and also beyond the session.”

He said it was important to address the undisclosed financial matters for the “continuing of our conversion, for the continuing of the purification of our church and its transparency.”

Bishop David L. Ricken of Green Bay, Wisconsin, said that given how the report described the way McCarrick operated at various levels, with the laity, with the hierarchy and among dioceses, it would be of great service to know and understand the personality traits and activities of a person like McCarrick — “predators” — so that prelates might be able to spot them and prevent another similar incident in the future.

“Very often they are highly manipulative, very attractive to people. Successful, if you want to put it that way, use all kinds of methods to groom young people into very dangerous situations and then they take advantage of them,” Bishop Ricken said.

“From what I read about McCarrick, he had these traits,” the bishop said, “and I think it would be very helpful to all of us to be able to understand the personality traits that someone like this brings forth and uses.”

He said prelates would do well to have professionals teach them to “identify these types of behaviors (among their own) … and in seminarians, when they first begin their studies, so that we’re not getting dangerous people in any contact with children.”

Bishop Mark E. Brennan of Wheeling-Charleston, W.Va., said that even though there’s a secret process to decide who will become a bishop, that perhaps when a determination about that person is made, the name of the person being considered should be made known public for a period.

He was named to head the statewide West Virginia diocese in 2019 after Pope Francis accepted the resignation of Bishop Michael J. Bransfield in September 2018 following allegations of sexual harassment of adults. The pope authorized Baltimore Archbishop William E. Lori to investigate the allegations of sexual and financial improprieties by Bishop Bransfield.

“To me, it will be helpful to avoid future problems if that name be made known, that name be published … in a time frame of a 30 or 60 days for people to comment,” Bishop Brennan said. “You might well surface things at that time that would affirm the appointment … or a deterrent to say that ‘this is not a good idea.”

Serious accusations could be investigated and “we might avoid promoting someone to bishop who really does not deserve it,” Bishop Brennan said.

He said if someone had listened to the grievances of a mother in the report who said she wrote letters about suspicions of McCarrick’s earlier abuses involving her sons, “perhaps we would not have had a Bishop McCarrick.”

There’s been many ways in which bishops been chosen over the centuries, he said, and “modification of the process today, I think, would be advisable.

Newark’s Cardinal Joseph W. Tobin said it was important to also address “what has been done since the terrible revelations about Theodore McCarrick took place in the summer of 2018.”

“I think it’s worthwhile because we’ve invested a lot in these measures and I’m referring first to the International Conference on Clerical Sex Abuse with an emphasis on episcopal responsibility that took place in February of 2019,” he said. “I think it would be ungrateful of us not to recognize … what has been done and also for people to know about the 800-number available.”

The Catholic Bishop Abuse Reporting Service has established (800) 276-1562 and ReportBishopAbuse.org for the public to make reports regarding sexual abuse involving bishops.

“It really has been a watershed moment,” he said. “And something that we should continue to study and read, but let’s be honest about this.

“The report mandated by the Holy Father was historic and so were his initiatives and we have structures in place now to move forward and we should pay attention to that, but also doing it in a way that’s in unity and with respecting collegiality with him,” the cardinal said.

“We have to make sure that we never again have a situation where anyone from our conference is taking sides in this, with the Holy Father or challenging him or even being with those who are calling for his resignation,” Cardinal Cupich continued. “That kind of thing really has to cease, and the Holy Father pointed the way in which we take up this initiative together in a collegial manner.”

Cardinal Cupich said it was important to recognize that there would be no report if victims did not have the courage to come forward in the first place.

He encouraged bishops and others in the church to spend time with victims, to give them courage.

“The report indicates that there are a number of reasons why victims did not come forward,” he said. “They were intimidated … they thought they would not be listened to because of the power structure and so on.

“But the more that we listen to victims and make it public that we’re meeting with victims, as the Holy Father does on a on a regular basis,” the Chicago prelate said, “the word will get out there that we are on the side of victims. And we have to continue to do that.”

He added, “We will learn to have our hearts moved the more we listen to victims, and I think it’s important for us to do that.”