Catholics nod to postelection divisions, see much work ahead 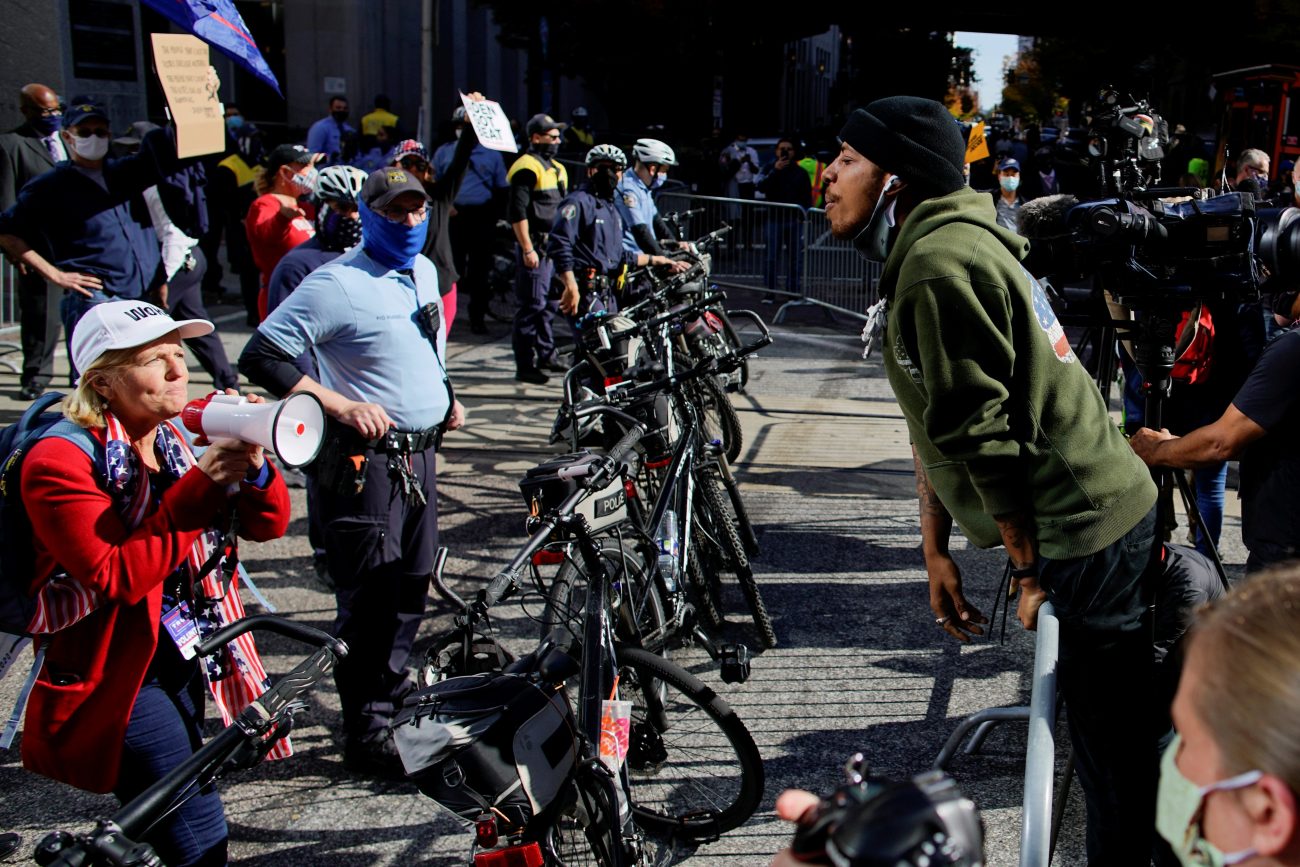 Supporters of President Donald Trump and Democratic presidential nominee Joe Biden shout at one another in Philadelphia during the vote count Nov. 5, 2020. (CNS photo/Eduardo Munoz, Reuters)

WASHINGTON (CNS) — The nation’s political divide was never going to be solved by the final tally of presidential votes or when the political signs came down.

And the talk of moving forward and finding healing, or at least turning down the vitriol, can seem an unsurmountable task for a nation still reeling with the pandemic with its rising death count and economic fallout.

Catholic leaders have acknowledged the long road ahead and the need for calm resolve.

No one is saying there will be an instant “Kumbaya” moment of collegiality, but in discussion about where the nation stands right now, a U.S. woman religious and a bishop used that very word to describe where the nation definitely isn’t.

“I doubt that any of us expected to wake up on November 4th ready to hold hands and sing ‘Kumbaya’ with the neighbors whose yard signs offended us for the last several weeks,” wrote Bishop John E. Stowe of Lexington, Kentucky, in a Nov. 4 statement.

Similarly, Sister Marcia Hall, vocation director of the Oblate Sisters of Providence in Baltimore, said prior to the election that even if it were to go smoothly, “we won’t all be holding hands and singing ‘Kumbaya,’ no matter who wins. … It’s going to take more than the election for us to start talking about coming together.”

Sister Hall and other women religious told Global Sisters Report, a project of National Catholic Reporter, no matter how the election played out, Americans would still have to find a way to live together, something that politicians can’t do for them.

Boston Cardinal Sean P. O’Malley, in a Nov. 5 statement on the election, pointed to an ideal postelection view, but said it will take some work to get there.

“The task we face is not fully captured in the data, the numbers, charts and graphs, the task is also a spiritual challenge,” he said. And quoting Pope Francis’ recent encyclical “Fratelli Tutti,” he said people are called to promote “friendship and an acknowledgment of the worth of every human person, always and everywhere.”

The Boston archbishop said the work ahead “calls us to respect the opinions of others, to dialogue about differing perspectives, to seek reconciliation where there has been estrangement, to work for healing among the people of our country.”

That’s not all though. He also said it means not giving in to “resentments based in divergent political views and divisions that have emerged from the stress of recent months.”

That starts right at the kitchen table and in conversations with friends, said Sister Carol Zinn, a Sister of St. Joseph of Philadelphia, who is executive director of the Leadership Conference of Women Religious, an umbrella group representing 80% of U.S. sisters.

“When I try to think about talking to a friend or a family member, this space that has grown to a gap between us did not just tap in with this most recent campaign,” she said. “It has been happening, and we have to learn again how to be in relationship with each other.”

She told Global Sisters Report the way Americans currently talk to each other “is clearly not working, so we have to find another way” which she said involves listening to each other and not shutting out others’ points of view.

The danger of not doing this, she said, is that Americans’ intolerance for one another could continue to grow, lessening the sense of community and shared humanity and possibly leading to violence.

This same idea was reiterated at a Nov. 4 webinar at Le Moyne College in Syracuse, New York, about moving forward after the election.

Jesuit Father David McCallum, the school’s vice president for mission integration and development, said: “These times are not easy, loving those who hold very different perspectives than ourselves is not easy; loving at a time when the conditions don’t seem to support love is not easy and yet this is what we are called to.”

Dialogue with those we disagree with calls for humility, he said. He also said to give it time and that Thanksgiving dinner might not be the best day to start this.

Divisions were clearly pronounced in this year’s election, but they aren’t new.

The “Prayer after an Election,” in the 2007 “Catholic Household Blessings and Prayers” from the U.S. Conference of Catholic Bishops, seeks God’s blessing on the country and its leaders but it also prays for healing.

“Heal us from our differences and unite us, O Lord, with a common purpose, dedication, and commitment to achieve liberty and justice in the years ahead for all people, and especially those who are most vulnerable in our midst,” it says.

Many turned to prayer both before and after the election.

Manhattan College in Riverdale, New York, held a postelection interfaith prayer service for “Hope and Healing” Nov. 4, bringing together students, faculty and staff outside the campus chapel. The service included a prayer for forgiveness for not living up to Gospel challenges, a Jewish prayer for the country and a passage read aloud from the Quran.

At the end of the service, participants recited together one of the prayers in the last section of “Fratelli Tutti,” where Pope Francis invites believers to ask God to “pour forth into our hearts a fraternal spirit and inspire in us a dream of renewed encounter, dialogue, justice and peace.”

Taking action is another step forward and for some students at Loyola Marymount University in Los Angeles, this has meant looking straight on at stereotypes people have of each other based on where they live or their age.

The main idea, she told Catholic News Service Nov. 6, is for students to recognize differences without demonizing the other.

“The country’s still going to be incredibly divided,” with the likely new president, she said. “Joe Biden has a big job. Maybe he can start to heal the wounds, but they are too large to heal quickly.”

“That’s why Jesuit education is no important right now,” she said, adding: “At root of it, love for one another is what we need.”

Contributing to this story was Global Sisters Report, https://www.globalsistersreport.org.

PREVIOUS: Catholics urged to pray for ‘clarity, peace’ after election