Catholics urged to pray for ‘clarity, peace’ after election 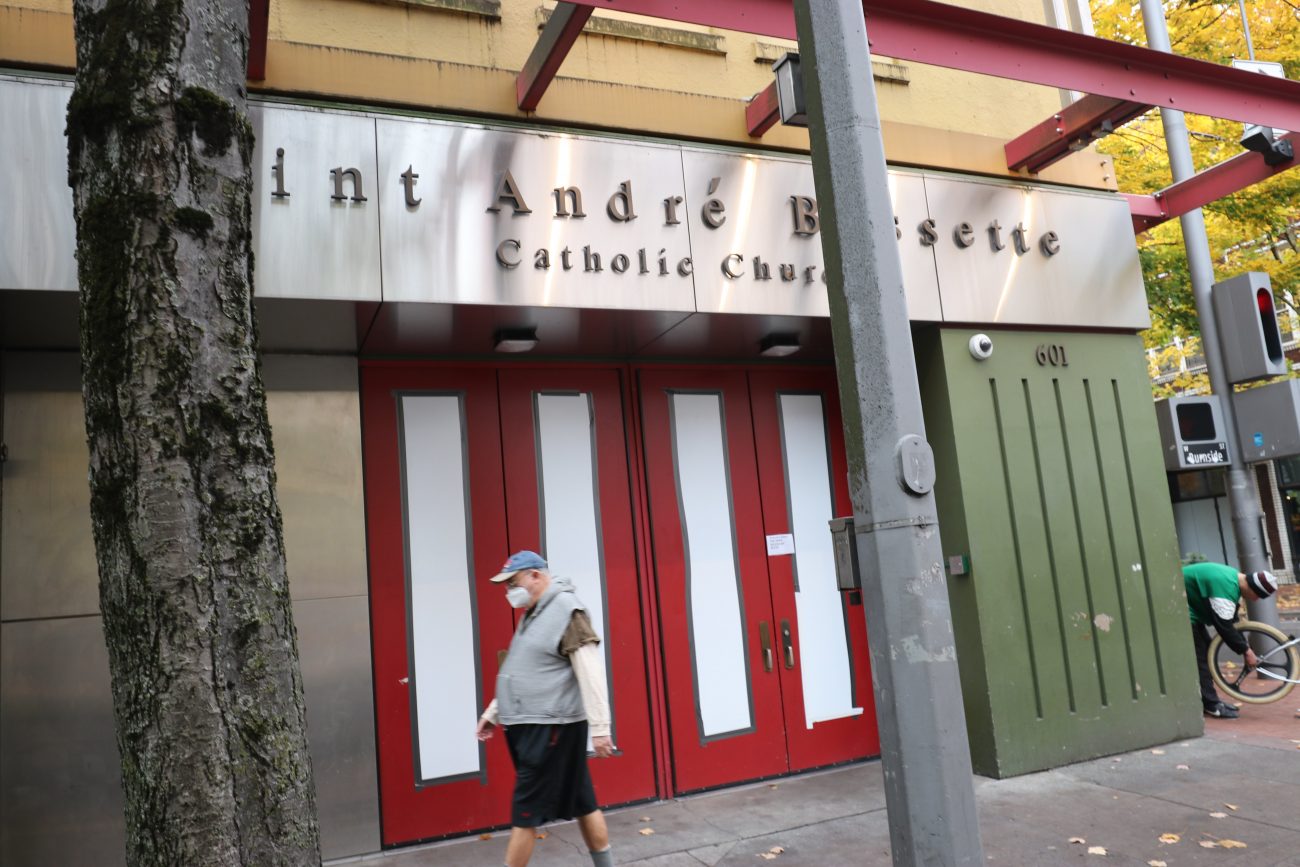 Paper covers the smashed windows of St. André Bessette Church in Portland, Ore., Nov. 5, 2020, as a man walks to get in line for the free meals the parish serves. Rioters took to the streets the day before in the wake of court challenges to counting ballots the Trump campaign claimed are illegal votes in some states. (CNS photo/Ed Langlois, Catholic Sentinel)

PHILADELPHIA (CNS) — The Catholic Medical Association Nov. 5 urged Catholics around the country to pray a novena or rosary “for clarity and peace” in the midst of the unsettled 2020 presidential election.

“As we pray the holy rosary for our nation at this critical time, let us offer it up in honor of Our Lady under her title of the Immaculate Conception since she is the patroness of our country,” said Father Matthew Gutowski, the association’s national chaplain.

“We ask her to place her holy mantle over our nation and to intercede that there be a just and peaceful resolution of the election and that we will have elected officials who support a culture of respect for all human lives, especially of children in the womb,” he said.

The Trump campaign has filed suits in Michigan, Pennsylvania and Georgia related to the ballot counting. In Nevada, the campaign was filing a federal lawsuit seeking to block “‘illegal votes’ from people, including those who became nonresidents during the coronavirus pandemic or who are dead,” according to news reports.

The Associated Press reported the Trump campaign and the Republican National Committee also have asked an Arizona judge to let them join a lawsuit that alleges problems with vote tabulation equipment that could have potentially skewed the results of ballots. In Georgia, the secretary of state announced there will be a statewide recount of ballots.

Since Election Day, public protests have taken place in a number of U.S. cities, including New York, Washington, Minneapolis and Portland, Oregon, with protesters claiming Trump does not want all votes counted, while the president said he is calling for all “legal votes” to be tabulated.

Some demonstrations have erupted in violence or confrontations with police, leading to arrests.

In downtown Portland, rioters smashed windows in the doors of St. André Bessette Church amid protests over vote counting in other parts of the country; Oregon’s race was already called, with Biden winning 57% of the votes to Trump’s 40.5%.

Church staff had papered over the windows by the next morning as homeless people lined up for meals, a daily ministry at the parish.

“St. André Bessette Church is one of the many buildings that had their windows broken out during this evening’s riot,” read a tweet from the Multnomah County Sheriff’s Office. “This organization helps those who are homeless, experiencing poverty, mental health issues and substance abuse.”

No graffiti accompanied the damage. It is not clear whether the church was targeted, or just happened to be along the rioters’ path. A clothing store that caters to LGTBQ shoppers also sustained heavy damage.

“We know the election is in God’s hands and trust that he will deliver a just outcome,” said Dr. Michael Parker, president of the Catholic Medical Association.

“No matter the outcome of the election,” he said, the association “will continue to advocate for religious liberty, conscience protection, and the principles of Catholic social teaching in health care for our members and the dignity of their patients.”

Contributing to this story was Ed Langlois, managing editor of the Catholic Sentinel, newspaper of the Archdiocese of Portland. 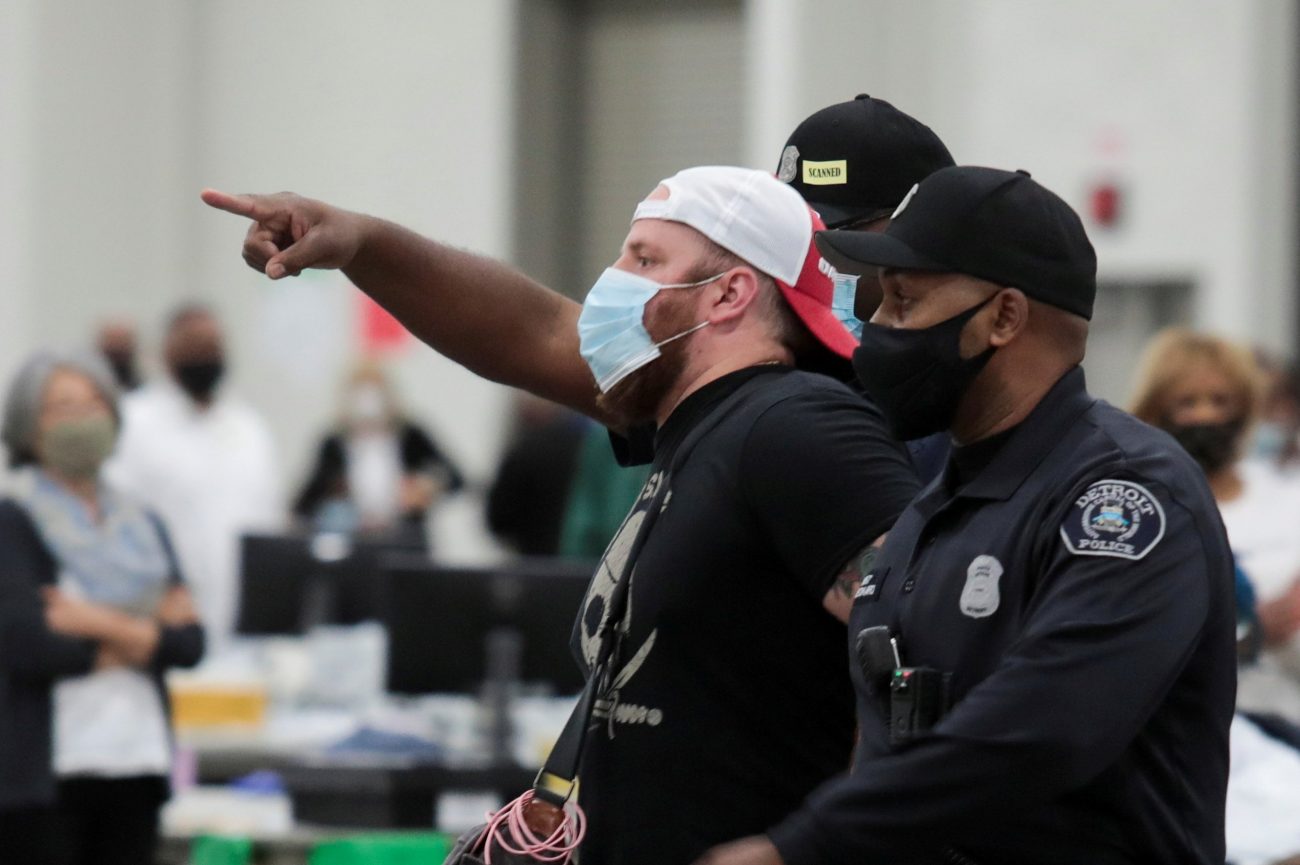 Detroit police escort a poll challenger out of the TCF Center Nov. 4, 2020, after he refused to leave due to room capacity at the center where poll workers were counting ballots. (CNS photo/Rebecca Cook, Reuters)

PREVIOUS: Report on ex-Cardinal McCarrick to be released Nov. 10

NEXT: Catholics nod to postelection divisions, see much work ahead