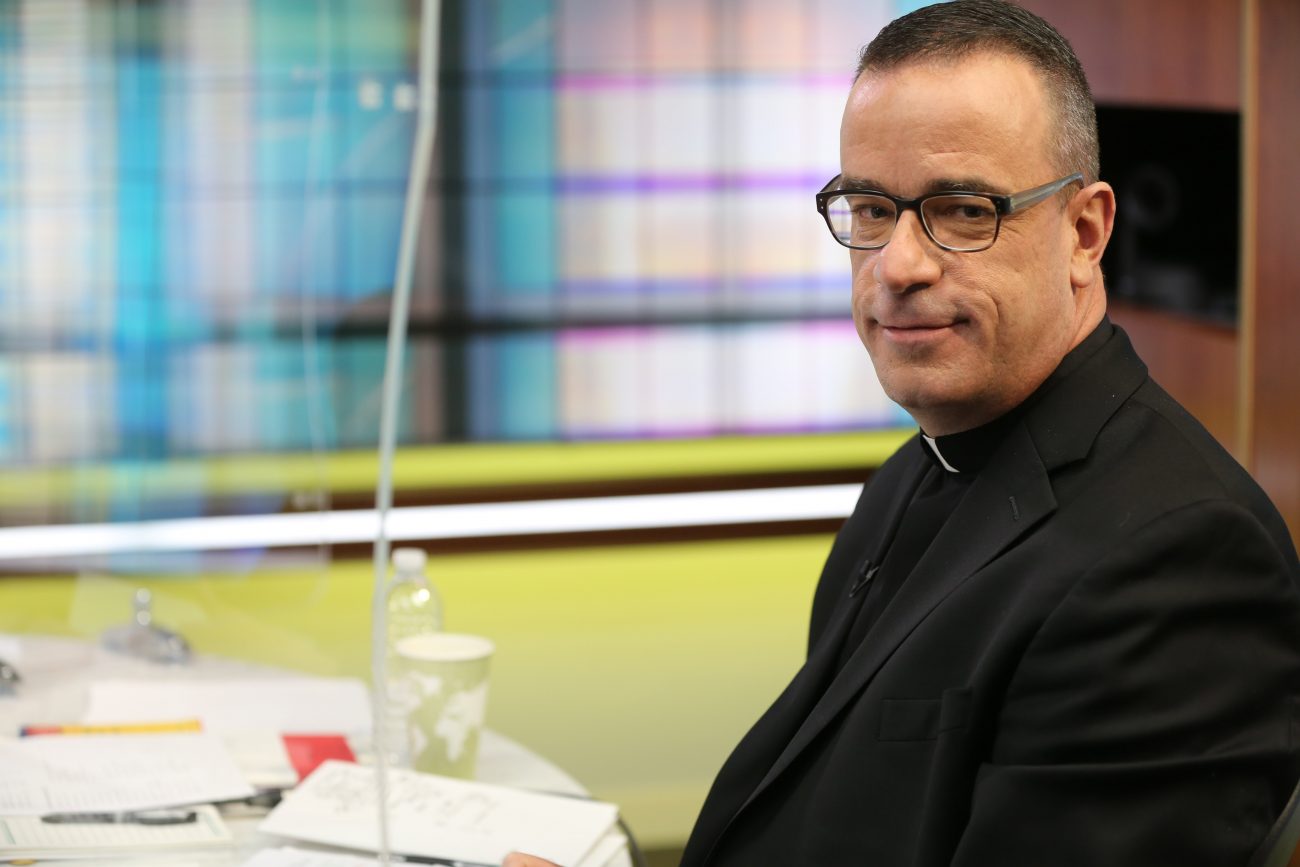 Msgr. Bransfield, who ended his five-year term as general secretary of the U.S. Conference of Catholic Bishops as the assembly concluded Nov. 17, credited his childhood parish priest in his native Philadelphia, who later became a beloved seminary professor, with teaching him about hope.

The priest, Father Steve Dougherty, exhibited a deep sense of hope while experiencing overpowering pain that lasted for years after a car-train accident and subsequent cancer diagnosis, Msgr. Bransfield said in an address marking the end of his tenure with the USCCB.

In times of all-consuming pain, when medication failed to ease his suffering, sometimes all Father Dougherty “could do was hold the crucifix,” Msgr. Bransfield said.

After Father Dougherty’s death, Msgr. Bransfield, by then USCCB general secretary, visited the elder priest’s rectory in search of the crucifix his friend embraced. Msgr. Bransfield thought it was something that could be held in the hand and might have been left tableside in his room. “I wanted it,” Msgr. Bransfield told the bishops.

“As I entered the room, I was surprised not to see a nightstand or a handheld crucifix. And then I looked and my mind stopped. My body froze. The raw immediacy returned. Instead of a nightstand and small handheld crucifix, there was a table and a crucifix that stretched 4 feet tall by 3 feet wide. The pain was that bad.”

“And so Father Dougherty taught me again, be careful when you look for a cross. The cross is no ordinary medicine.”

That’s when Msgr. Bransfield said he realized that his priest friend embraced the crucifix. “Father Dougherty pointed to the one who clung to the cross in his deepest pain.”

“In the crucifixion, when the only Son of God, when the Almighty, becomes powerless, a new and overwhelming beauty is unleashed upon the earth,” Msgr. Bransfield said.

The outgoing general secretary said that during his 13 years with the USCCB, he has seen the full body of bishops endure troubling times and the pain of clergy sexual abuse in the same way that Father Dougherty did, cane at his side, as he made his way to the altar for Mass years earlier.

“I have seen you leaning only on Christ. And that leaning on Christ, that deeper endurance of pain and hardship after bottomless hardship, that leaning on Christ alone transforms trials into hope,” he said. “Hope is the hallmark of the Christian. You live the burden every day and carry the pain, and the only way to transform pain into hope is by shouldering it. And in the lifting, hope becomes determination.”

Msgr. Bransfield also recalled his friend’s welcoming spirit at his childhood parish, an act recognizing “there are no perfect people here.” Msgr. Bransfield said the bishops have taught him much the same lesson: that all are welcome.

Msgr. Bransfield, 53, earlier told Catholic News Service he had come to appreciate his work at the USCCB because of the people who work under the direction of the bishops.

Early in his tenure as general secretary, which began in 2015, Msgr. Bransfield learned, too, that it was important not to remain in his office at USCCB headquarters and to walk through the building to talk with people. Most mornings, he greeted people outside the building’s main entrance as they arrived for work, even in the midst of winter.

“The first lesson I learned was to frequently come off the fifth floor to meet our people. That’s key. That and connection to our staff and teams and colleagues,” he said.

He compared the outreach to that of a parish pastor who greets parishioners arriving for and departing from Mass.

“That’s really the format for everything, no matter what the shape of a specific ministry looks like. There has to be momentum toward connection,” he explained.

Msgr. Bransfield saw that connecting with others became much more difficult as the coronavirus pandemic took hold in March, leading to the closing of the USCCB headquarters. Limits remain in place regarding how many people can be in the building at any one time.

Staff safety has been the top priority while navigating such an unprecedented time, he said, explaining, “Our work is important but our people are more important.”

Msgr. Bransfield began working at the USCCB in 2007 when he joined the Secretariat of Evangelization and Catechesis after doctoral studies at the St. John Paul II Institute and a faculty appointment at St. Charles Borromeo Seminary in the Philadelphia Archdiocese.

With his term complete, Msgr. Bransfield plans to return to the Philadelphia Archdiocese for a brief sabbatical during which he hopes to finish a book about angels. It’s a project six years in the making.

“It’s a practical everyday approach to angels in Scripture and how angels are closer than we think,” he said. “God has chosen to rely on the ministry of light, the ministry of angels and so do we in many ways.”

He has written articles on evangelization and catechesis for Catholic periodicals and has written several books, including titles addressing St. John Paul II’s view of the human person and the beatitudes.

After finishing his latest book, Msgr. Bransfield expects to be assigned to a parish by Philadelphia Archbishop Nelson J. Pérez. The draw of parish ministry, which he began after ordination in 1994, remains strong within the longtime administrator.

“The Gospel takes place preeminently in the parish,” he told CNS. “The parish is where we (as a priest) first were called. … It’s where we first deeply encounter the vocation. There’s something about it that remains original in us and that’s why it always calls us back.”