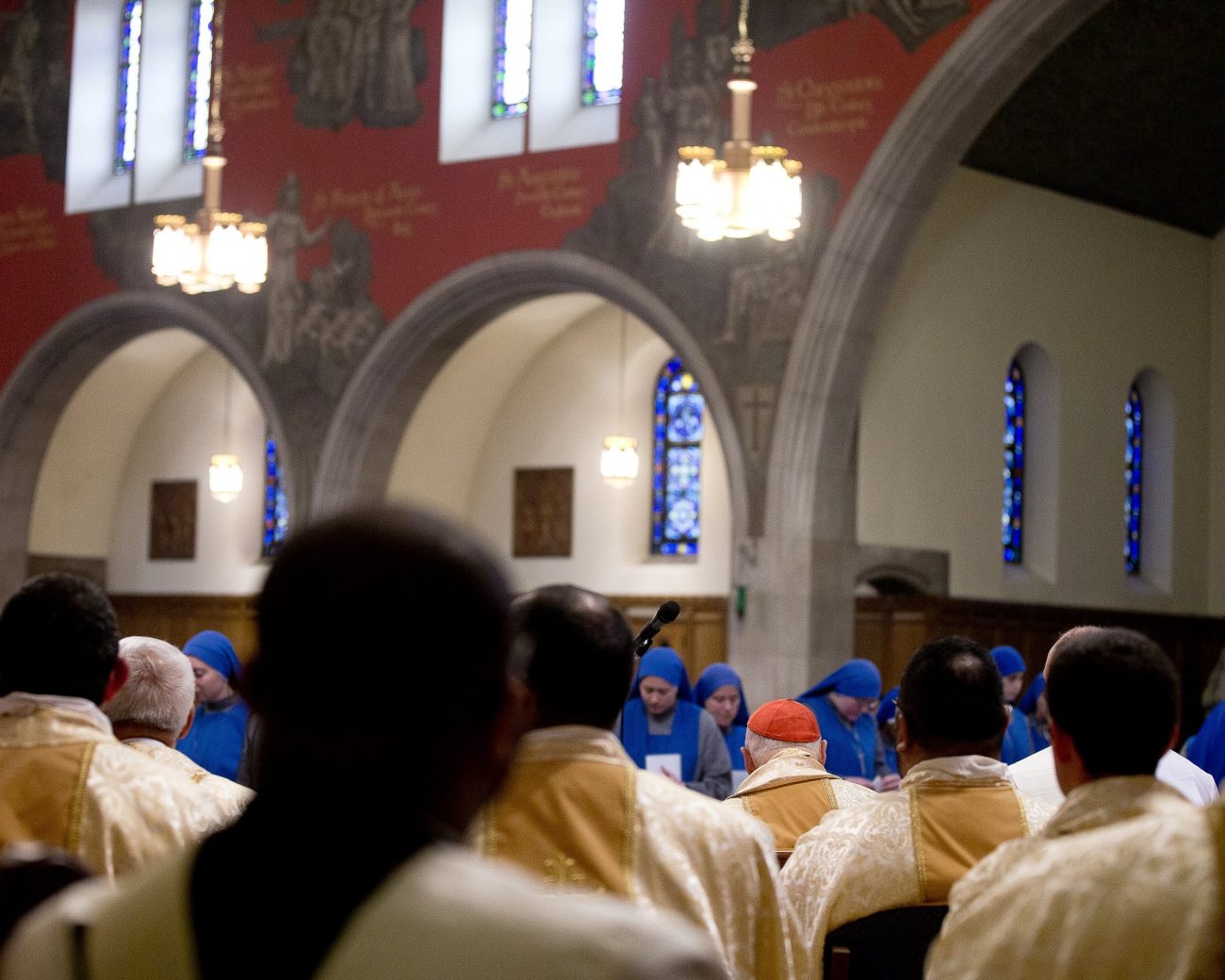 Then-Cardinal Theodore E. McCarrick, retired archbishop of Washington, celebrates Mass Nov. 1, 2017, for the Servants of the Lord and the Virgin of Matara at Holy Comforter-St. Cyprian Catholic Church in Washington. (CNS photo/Tyler Orsburn)

(CNS) — Prelates in the archdioceses and the diocese where Theodore McCarrick worked during his rise through the church’s hierarchical structure despite rumors of sexual impropriety welcomed a Vatican report regarding the onetime cardinal, saying it advances accountability and transparency regarding clergy sexual abuse within the church.

Church leaders in New York, Metuchen and Newark, New Jersey, and Washington said in statements Nov. 10 that while they had not yet read the entire 400-page report, they pledged to study it to better understand its implications for their jurisdictions as well as for the broader church.

Cardinal Timothy M. Dolan of New York, where McCarrick was ordained a priest in 1958 and the first allegations about abuse were made against him in 2017, said the Vatican report “is a necessary step” in understanding the case surrounding the former cardinal.

Cardinal Dolan credited the victim-survivors of the alleged abuse by McCarrick, now 90, who approached the New York Archdiocese with their concerns.

“You took us at our word that we wanted to assist you and in so doing, you helped bring this matter to light, proving that anyone who has abused a minor, even a cardinal will be punished,” Cardinal Dolan said.

In the Diocese of Metuchen, where McCarrick became its first bishop in 1982, Bishop James F. Checchio said in a letter to the diocese that the faith community had carried a heavy burden as the allegations were determined to be credible.

“These burdens seemingly grew heavier with each day that followed as we learned the heart-wrenching truth of the crimes and sins of the past and wondered how Theodore McCarrick was still given greater responsibilities in the church, despite the rumors of his abusive actions with seminarians and young priests,” Bishop Checchio wrote.

“While I am grateful to Pope Francis for ordering this study to arrive at the ‘truth’ of what happened, like everyone else, I am disgusted and appalled by what has taken place,” Bishop Checchio added.

Meanwhile, Cardinal Joseph W. Tobin of Newark, where McCarrick became archbishop in 1986, called the report “a significant and powerful step forward in advancing accountability and transparency regarding sexual abuse.”

“Beyond the victims themselves, failures by some leaders in the Catholic Church have wounded many, including the families and loved ones of victims and the faithful,” Cardinal Tobin said.

“It is important to recognize that the church has made progress in responding to clergy abuse by implementing policies and programs to safeguard the faithful, especially the most vulnerable among us,” he added.

Cardinal-designate Wilton D. Gregory of Washington said that disclosure of the action of church leaders in the U.S. and at the Vatican was essential to help bring healing, calling it an “an important, difficult and necessary document.”

“We know that if true redemptive healing is ever to commence — for those who have been harmed and for the church herself — this disclosure must be made,” Cardinal-designate Gregory said.

McCarrick became archbishop of Washington in January 2001, and was elevated to cardinal weeks later. He retired from his post as archbishop in the nation’s capital in 2006 at age 75.

Cardinal-designate Gregory, who was installed as the archbishop of Washington in May 2019, pledged transparency and honesty in dealing with the abuse crisis that had shaken the country and the archdiocese.

“By virtue of the simple fact that this investigation had to be conducted and this report had to be written, my heart hurts for all who will be shocked, saddened, scandalized and angered by the revelations contained therein,” Cardinal-designate Gregory said.

The Diocese of Metuchen’s reaction to the release of the report included a detailed outline of events diocesan officials took to investigate McCarrick after allegations of sexual abuse against him became public in 2018.

In response to those reports, the bishop said, Metuchen diocesan officials hired an independent law firm to oversee its own investigation and a review of its archives. The findings were sent to the Vatican as investigators there compiled the so-called McCarrick report, he said.

The diocesan investigation concluded that all known complaints against McCarrick previously had been disclosed, although church officials in Metuchen became aware of new allegations as recently as June 2020, the Diocese of Metuchen said in its Nov. 10 statement.

“In total, the report identified that seven individuals, who were adults at the time of their abuse, came forward to report allegations of abuse by McCarrick since the first allegation against him was received by the diocese in 2004,” the statement said.

The diocese’s report also said that all abuse allegations were reported to local and state law enforcement authorities and the papal nuncio in Washington.

The long-awaited Vatican report summarizes the actions of church officials, including earlier popes, that allowed McCarrick to rise through the church’s hierarchical structure to become a cardinal despite years of rumors of sexual impropriety.

McCarrick used personal contacts, protestations of his innocence and a lack of church officials reporting and investigating accusations to become cardinal, according to the Vatican summary of its report on the matter.

McCarrick resigned as cardinal in July 2018 after the allegations became public. He was dismissed from the clerical state in February 2019 by Pope Francis after a Vatican investigation into allegations that he had abused minors and engaged in sexual misconduct with adults.

All four of the prelates in New York, Newark, Metuchen and Washington also urged anyone who has been abused by a priest, bishop or anyone else in the church to report their allegation to law enforcement and to church authorities.

Contributing to this report was Mark Zimmermann in Washington.

NEXT: Report’s look into U.S. abuse scandal digs up pain, hope in transparency