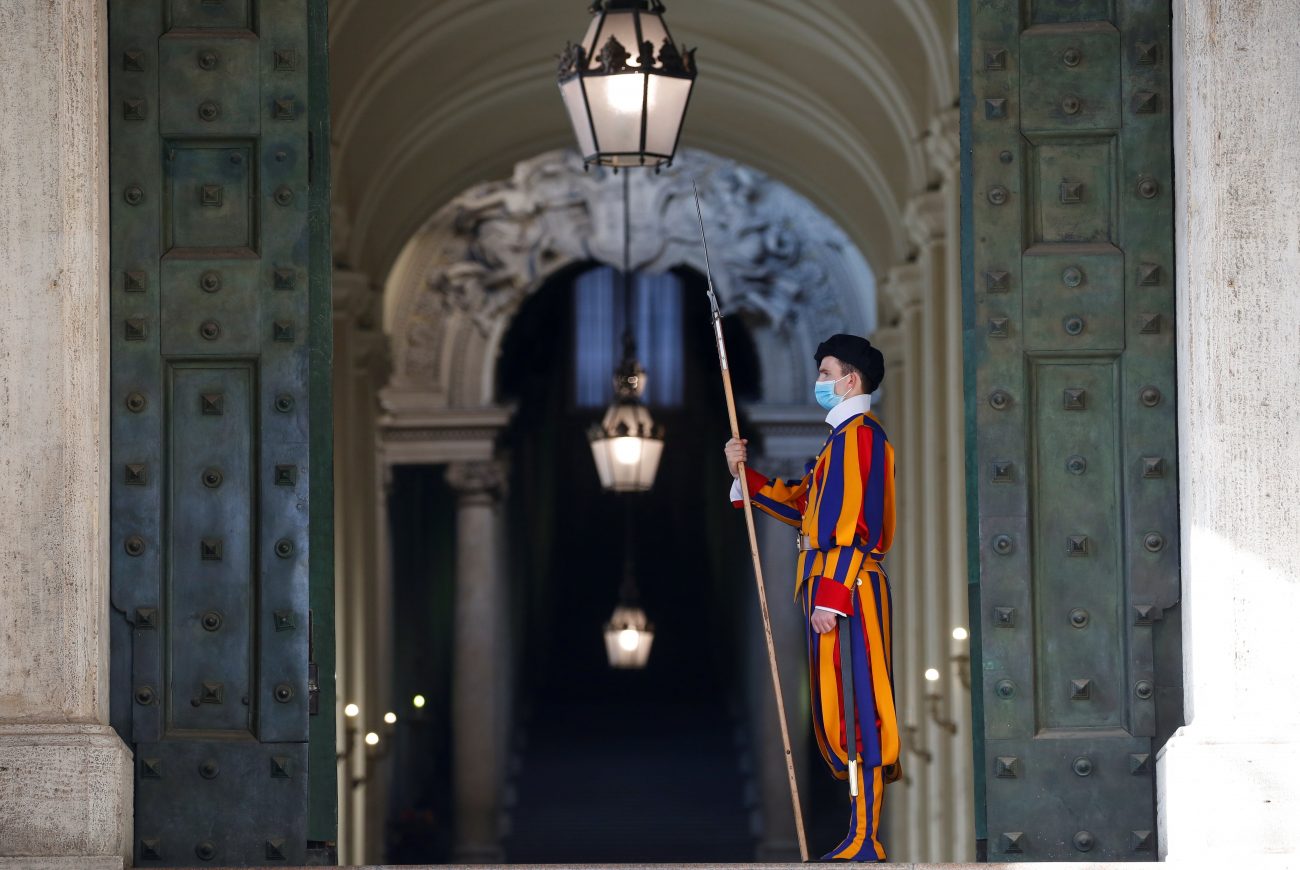 A Swiss Guard stands at a Vatican entrance Nov. 9, 2020, the day before the Vatican released its long-awaited report on ex-Cardinal Theodore McCarrick. (CNS photo/Remo Casilli, Reuters)

WASHINGTON (CNS) — The Catholic Church’s unusual transparency in a report detailing the ascent to power of former U.S. Cardinal Theodore E. McCarrick, despite top church officials’ knowledge of his sexual abuses, brought feelings of betrayal and hurt after its Nov. 10 release.

“As I read the #McCarrick report I am disgusted,” tweeted Juan Carlos Cruz, a survivor of clergy sexual abuse, shortly after the publication of the long-awaited document on who knew what and when at the Vatican and in the U.S. church about the abuses of the former archbishop of Washington.

Many have wondered: If church officials knew, how did they allow him to continue, and worse, why was he elevated to cardinal?

The public might find it difficult to digest some of the stomach-churning and heart-wrenching moments in the report, not only of the abuse unleashed on children but of the helplessness of the laity, of Catholic families, including an account of a mother who tried to stop the abuse by bringing it up to church leaders who turned a blind eye to it, said Kathleen Sprows Cummings, associate professor of American studies and history at the University of Notre Dame.

But it’s a groundbreaking document nevertheless, Cummings told Catholic News Service in an interview Nov. 10, because “nobody comes out looking like hero,” and the painful truth found in it gives hope “that the Catholic church internally can investigate itself,” she said.

McCarrick, 90, was dismissed by the Vatican from the clerical state in February 2019 following an investigation of accusations that he had abused children early on in his career of more than 60 years as a cleric, and that he also had abused seminarians as a bishop in New Jersey.

After allegations were made public in the summer of 2018, he left the spotlight of Washington that fall, banished from his life as an elder globetrotter to a life of prayer and penance at a Capuchin friary in rural Salina, Kansas. He left that place in early 2020. His whereabouts since then are unknown.

The report shows how his friendship with St. John Paul II, who, as pope, had heard sex abuse accusations against McCarrick as he considered naming him a bishop, but believed the cleric when he denied wrongdoings.

“The layers of complicity are deep in this,” Cummings said.

Nevertheless, “recognizing is the first step to claiming power” over the problem, she added.

“I hope a positive way to read this would be to say that laypeople, as well, have to dismantle the clerical culture of privilege that McCarrick helped create and certainly sustain,” she said.

Publication of the report prompted calls for meaningful reform, particularly from victims.

John Carr, director of the Initiative on Catholic Social Thought and Public Life at Georgetown University, who has written about his sexual abuse by a cleric at his high school seminary, said in a statement Nov. 10 that he hadn’t yet read the report, but in telling the “truth about terrible past failures,” he hoped the church would recognize and apologize “for the horrific pain and loss of victim/survivors.”

And certainly, many bishops came out publicly expressing sorrow for the past. They included Los Angeles Archbishop José H. Gomez, president of the U.S. Conference of Catholic Bishops, Cardinal Blase J. Cupich of Chicago, Bishop Michael F. Burbidge of Arlington, Virginia, and many others.

“The report issued today is unprecedented and a watershed moment as it pulls back the curtain on a culture of clericalism that has separated the clergy from the people they have been ordained to serve,” said Cardinal Cupich in a statement. “While the report makes for painful reading, it is fearless in admitting the failures of church leaders.”

It was another example of Pope Francis’ commitment to responsibility, accountability and transparency to victim-survivors and all harmed by the sexual abuse of minors and other misconduct by the clergy and bishops of the Catholic Church, he said.

Bishop W. Shawn McKnight of Jefferson City, Missouri, who has been an outspoken critic of the church’s handling of the abuse cases, said the report showed the difficulty for any closed system, “even one divinely inspired,” to handle charges of misconduct against anyone with power and authority, thus there is a need for a protocol that ensures accountability and involvement by laity.

“The report clearly shows a closed system depends upon the power of the accused, rather than the legitimacy of the accusations, in determining responses,” he said in a statement. “We need to move forward with the reforms recently enacted. Laity can and must assume an important role in assuring proper transparency and accountability of the hierarchy.”

But even the laity are not immune to partaking in clericalism and that’s why reading the report is important for all who take part in the life of the church, Cummings said.

“It would be a mistake to think that only clerics can be guilty of clericalism because members of the laity can, as well, by automatically giving deference to those who wear a collar, that they wouldn’t give to anyone else,” she said.

She gave the example of one of the cases detailed in the report, where the father of one of McCarrick’s victims didn’t react to the cleric caressing the inner thigh of one of his sons.

“He literally does not see it. He’s oblivious to it and that’s because clerical privilege is blinding him to that,” Cummings said. “So, I think that is a dramatic example. But we all have to ask ourselves: What are we willing to let clerical leaders get away that we wouldn’t ever allow among lay leaders in professional settings or even in, even in church settings? … Why are we looking away?”

Bishop McKnight, in a Nov. 10 interview with CNS, said the report shows why it’s important to have a strong presence from those outside the closed system that clerics inhabit.

“The report does indicate that there were bishops who did not completely convey all the information they had,” he added. “That’s the reason we need independent eyes. We need someone from the outside of that closed clerical system.”

Cummings said she hoped the report would make Catholics examine situations around them and not blindly accept what clergy — at all levels — say or do.

“It’s a hard document, but we need many, many more of them,” she said. “And I would, I would hope that laypeople and priests, as well, would be galvanized by this to say, ‘We need to tell the truth, not only about McCarrick, but about every abuser,’ so this cycle doesn’t repeat itself over and over.”