McGivney family members, many others ‘thrilled’ Knights’ founder is beatified 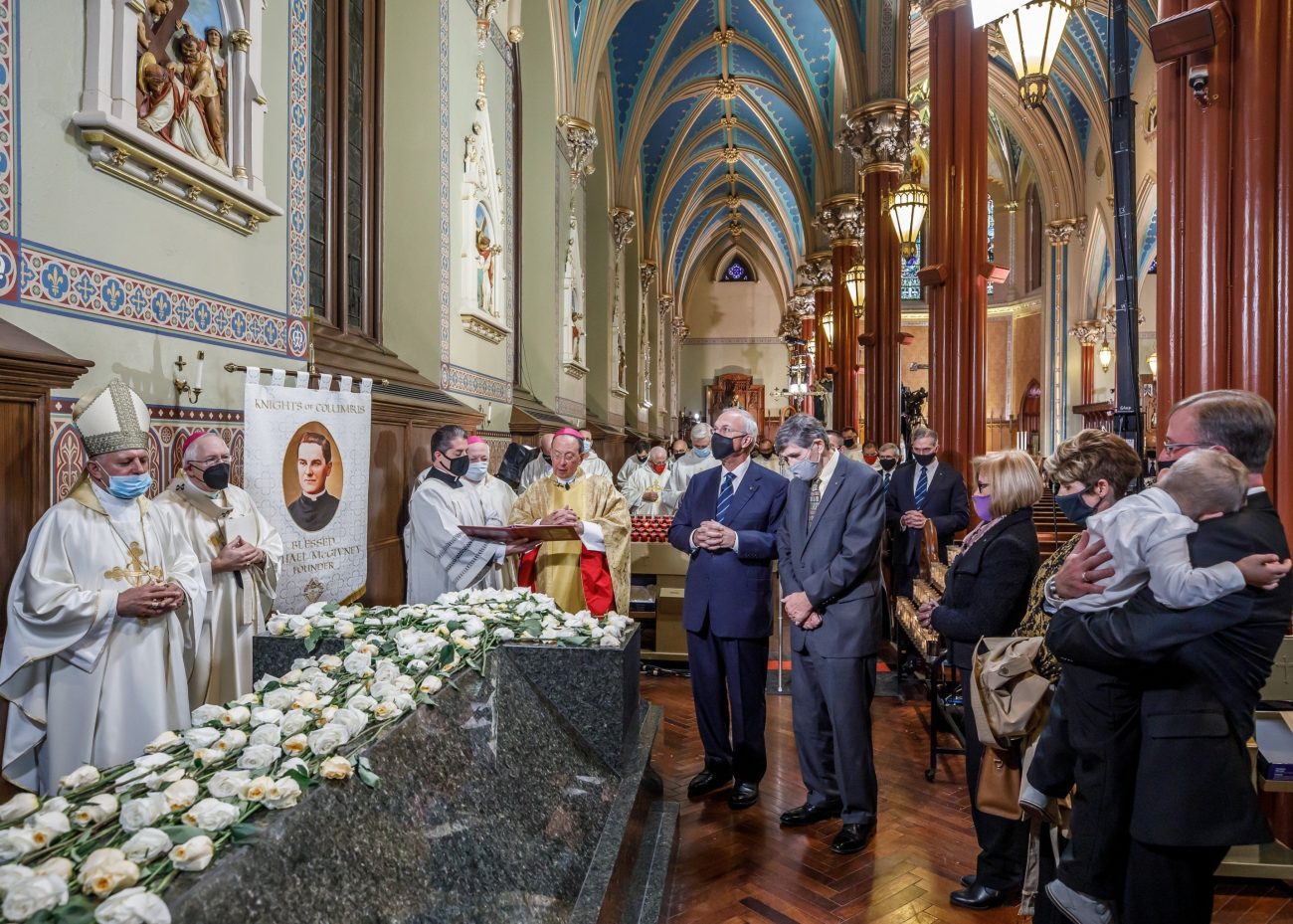 Baltimore Archbishop William E. Lori, Supreme Knight Carl Anderson and members of the Schachle family pay their respects Nov. 1, 2020, at the sarcophagus near the entrance of St. Mary's Church in New Haven, Conn., where the remains of Blessed Michael McGivney are entombed. (CNS photo/Aaron Joseph, Archdiocese of Hartford)

HARTFORD, Conn. (CNS) — John Walshe of Bridgeport, Connecticut, remembers the unveiling of the Father Michael J. McGivney statue in downtown Waterbury, Connecticut, when he was in eighth grade.

Dozens of years later, he was proud to attend the beatification Mass for his relative, now-Blessed McGivney, which was celebrated Oct. 31 at the Cathedral of St. Joseph in Hartford.

“I thought it would never happen,” said an emotional Walshe, who is referred to as the McGivney family expert. One of Blessed McGivney’s sisters, Rose McGivney Finn, was Walshe’s great-grandmother.

Walshe and his cousin were among the limited number of congregants who were allowed to attend the beatification Mass in person. They were among the attendees interviewed by the Catholic Transcript, the magazine of the Archdiocese of Hartford.

The number inside the cathedral was limited by COVID-19 restrictions, and those who were there had to wear face masks and remain socially distanced from one another. EWTN broadcast the Mass and the Knights livestreamed it online.

The Vatican announced May 27 that Pope Francis approved a decree recognizing a miracle attributed to the intercession of Father McGivney, paving the way to his beatification.

The miracle involved the healing of Michael “Mikey” McGivney Schachle in utero from what would have been a fatal case of fetal hydrops. Michael, his parents, Daniel and Michelle Schachle of Dickson, Tennessee, and several of the couple’s other children, attended the beatification.

“It’s unbelievable, it’s indescribable,” said Daniel Schachle, a sentiment echoed by his wife. “It’s all very surreal and humbling.” He added that he hoped people walked away with a “really deep pro-life message.” Little 5-year-old Mikey said he was having “fun” on his trip to Connecticut, especially swimming in the hotel pool.

Sister Veronica Mary Sullivan who was raised in Waterbury, credits Blessed McGivney with saving her brother Dennis, who had suffered a massive heart attack at age 41 in 2006.

His heart stopped beating for 26 minutes and doctors were ready to give up but gave him five more minutes. Doctors got a response in that time frame, but the situation still looked grim. But he recovered completely and went on to live life to the fullest for another 12 years.

A member of the Sisters of Life, Sister Veronica traveled from New York to attend the beatification, “the day my family has been waiting for,” she said. “I’m flooded with thoughts of how much grace is going to be poured on the world because of this.”

Father James Sullivan is another of Sister Veronica’s brothers. He is the rector of the Basilica of the Immaculate Conception in Waterbury, where Blessed McGivney received his sacraments, including his first Communion. The priest said he would do “cartwheels” if he could over the beatification.

“We are thrilled for the archdiocese, the laity, everybody,” said Father Sullivan, who has had a lifelong devotion to Blessed McGivney. “We knew it would happen. It feels right now, during a pandemic.”

Msgr. John J. Bevins, a former rector of the basilica, called the beatification “a dream come true. It is just so great.”

Father Joseph Crowley, pastor of St. Maximilian Kolbe Parish in Thomaston, Connecticut, formerly St. Thomas Church, where Blessed McGivney served as pastor and later died there, characterized the beatification as “awesome.” He added, “It’s a great example of what an individual can do for the rest of the world.”

Blessed McGivney, the first American parish priest to be beatified, can be viewed as a martyr of a pandemic. When he died of pneumonia complications at age 38 in 1890, he was tending to the faithful during an outbreak of influenza known as the Russian flu Thomaston. Some recent evidence, according to the Knights, indicates the outbreak may have been the result of a coronavirus.

One of the authors of the biography “Parish Priest: Father McGivney and American Catholicism,” made the trip to Hartford from outside of Syracuse, New York. “I truly feel like he is a friend of mine,” historian Julie M. Fenster said. “It’s a beautiful day.”

Fenster wrote the book with fellow historian Douglas Brinkley. It was published by William Morrow/Harper Collins in 2006.

Blessed McGivney served as parochial vicar at St. Mary’s Church in New Haven, Connecticut, and formed the Knights of Columbus in the basement church hall. The current pastor, Dominican Father John Paul Walker, said the beatification is a “unique moment in history” and to be part of it is a “great honor, a great joy and a great grace.”

Father Jeffrey V. Romans, the Knights’ Connecticut chaplain and pastor of St. Bridget of Sweden Parish in Cheshire, Connecticut, said it is incredible to be at the ceremony to “celebrate one of our own.”

In 1997, Father McGivney’s cause for sainthood officially opened in Hartford by now-retired Archbishop Daniel A. Cronin, 92. “I didn’t think I would live this long,” Archbishop Cronin said at the beatification. “I never thought I’d live to see this day. It’s just wonderful.”

Supreme Knight Carl A. Anderson said the beatification serves to encourage the vision of lay leadership and fellowship. He announced that the Knights Museum in New Haven will be transformed into the Blessed Michael McGivney Pilgrimage Center to serve pilgrims who travel to New Haven to learn about Father McGivney and to pray at St. Mary’s Church, where Father McGivney’s remains are entombed.

Avitabile is editor of the Catholic Transcript, magazine of the Archdiocese of Hartford.