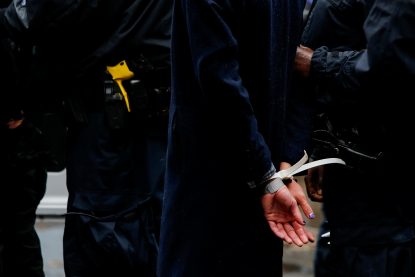 WASHINGTON (CNS) — Restorative justice “provides the language and the tools to help repair some of those historical harms” of racism, according to one panelist during an Oct. 29 session on racial justice and healing in restorative justice.

“I was able to look at the civil rights movement as the blueprint for the modern restorative justice movement,” said Sheryl Wilson, director of the Kansas Institute for Peace and Conflict Resolution, during the presentation sponsored by the Catholic Mobilizing Network.

She also is president of the National Association of Community and Restorative Justice, a professional organization for restorative justice practitioners.

Kansas has 1,000 teachers trained in restorative justice principles. “We’ve gone from training the individual trainers to the whole-school approach. That really changes the culture, from the teachers to the people who sweep the floors to the people who write the bills,” Wilson said. “That’s really going to shift the whole culture when young people enter a restorative institution.”

Her own restorative justice circle allows its participants to “speak the truth of the historical time, but also of the current time,” said Kayla Jackson, who helps coordinate monthly conversations on race in her role as social justice ministries coordinator at Old St. Patrick Parish in Chicago.

“We have to address the past time, and also address the current time: ‘What are you going to do to put an end to this cycle?'” she said.

Jackson said, “People of color, we’re gaslighted. ‘That’s crazy. Is this me?’ … There’s something so freeing, hearing your story, your truth validated. And someone else saying, ‘Me, too.’ It’s so beautiful to witness.”

The faith community can enter into this, Jackson said, citing the values espoused in Catholic social teaching. “They’re on paper,” she added. “We need to be circling back to saying, ‘What does this look like in real life, and what does it call of us to live it out?'”

“We tend to focus on the harm that racism does on people of color. It’s been powerful in spaces where white folks are able to say where we have benefited materially from racism … how it’s warped our sense of relationship, how we’ve recirculated the values of white supremacy without being aware of it,” said Ryan Lents, a former lay minister in the Archdiocese of Chicago, who is now part of the staff of Crossroads Antiracism Organizing and Training in Chicago.

Lents said whites must ask themselves, “How can I make myself not the racist? How can I convince myself and others that I don’t operate out of a place of racial prejudice?”

One obstacle, Lents said, is “addressing discomfort, especially with white people,” who think, “I don’t want to say the wrong thing.” “That can be an obstacle to getting into the critical conversations that we need to be having. Compared to the discomfort that people of color have every day with racism being inflicted upon them, it’s not the same thing.”

In his circles, Lents said, “we don’t’ talk about a safe space. We talk about a courageous space, a creative space.”

In the month after the killing of George Floyd in Minneapolis, “we had 300 inquiries” about anti-racism conversations, Lents said. “It’s good that people are recognizing a sense of urgency that we need to have these conversations. But I’m concerned that some people just want to check a box.”

He added, “It took 400 years to get to where we are today. But if you think that one afternoon is going to take care of it … it’s going to set up some unreasonable expectations.”

Rather, “it’s holy work. It a chance to live out the integrity of faith,” Lents said. “There’s something liberating about waking up and saying, ‘I want to live out my values in a truly integrative way.'”

Wilson, who also teaches at Bethel College in Kansas, which is run by the Mennonite Church — one of the historic “peace churches” of Christianity — said, “What gives me hope is the next generation.”

Her 20-year-old son took her class in anti-racism. “My child made an A, not because I was deliberately harder on him. I was — and he still made an A,” she said. “It was amazing what he had retained from just being my child (in anti-racism training),” she added, joking, “I’m probably the most nonrestorative restorative justice person in my home.”

Wilson said, “My son can lead a circle. My son understands relational issues that I wish I had learned at his age. These are life skills when you learn the value of restorative justice. You will get to be in community with people in ways that we need.”

NEXT: As nation awaits election results, tensions and fences rise