News accounts of McCarrick report lay blame on popes, others 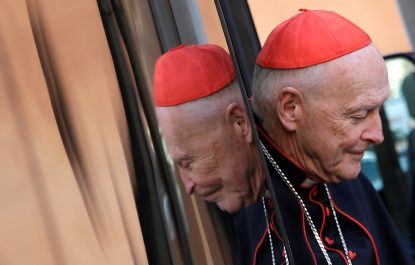 WASHINGTON (CNS) — News coverage of the Nov. 10 release of the Vatican’s long-awaited report on how former cardinal Theodore McCarrick managed to rise through the ranks of the clergy, despite sexually predatory behavior that stretched back decades, differed depending on the source of the media.

It also shows how many perspectives can be gleaned from a report 460 pages in length.

Daily newspapers in the archdioceses where McCarrick once served as a priest, auxiliary bishop or archbishop focused much more on St. John Paul II brushing aside rumors of McCarrick’s actions, although such treatment of the circumstances was not universal.

Catholic publications — both national newspapers and newspapers in dioceses where McCarrick served — painted a somewhat, but not entirely, different picture of where the fault lay.

The New York Times — McCarrick had been ordained a priest and an auxiliary bishop in the New York Archdiocese — declared that “Pope John Paul II had rejected explicit warnings about sexual abuse by Theodore E. McCarrick, now a disgraced former cardinal, choosing to believe the American prelate’s denials and misleading accounts by bishops as he elevated him to the highest ranks of the church hierarchy.”

The Washington Post — McCarrick’s last appointment, where he was elevated to the rank of cardinal and lived in retirement for 11 years until the scandal broke in 2018 — said the report “found that Pope John Paul II knew about and overlooked sexual misconduct claims against Theodore McCarrick, instead choosing to facilitate the rise of an American prelate who would be defrocked and disgraced two decades later.”

NJ.com, an online news service in New Jersey that encompasses the Star-Ledger in Newark — McCarrick had served there between appointments as bishop of Metuchen, New Jersey, and archbishop of Washington — used the Associated Press’ account, which said that “a series of bishops, cardinals and popes downplayed or dismissed reports that he slept with seminarians, and determined that Pope Francis merely continued his predecessors’ naive handling of the predator until a former altar boy alleged abuse.”

Metuchen, population 12,840, has no daily newspaper. The Metuchen Mirror, a monthly publication founded in 2017, carried no news of the Vatican report on its website. McCarrick had been the central New Jersey diocese’s first bishop. “We’ll be getting into this in our December issue,” said the Mirror’s editor and publisher, Randy Splaingard.

The Trentonian, the daily newspaper in Trenton, New Jersey, likewise offered no immediate coverage of the Vatican report.

In 2005, the Diocese of Trenton, along with the Metuchen Diocese and the Newark Archdiocese, was part of a global confidential settlement agreement with victim-survivor Robert Ciolek. Ordained a priest after abuse by McCarrick began, he eventually left the priesthood to marry.

Trenton’s part in the settlement, however, had nothing to do with claims against McCarrick, but rather abuse Ciolek suffered in the 1970s while attending a high school that was once in Trenton’s jurisdiction.

New York Times columnist Elizabeth Breunig, in one of two columns posted Nov. 10 on the Times’ website, said, “Conservative Catholics worried that any inquiry into Mr. McCarrick carried out under the aegis of Pope Francis would finesse any inappropriate actions by the current pope and heap blame on Benedict XVI and John Paul II, both of whom enjoy a much warmer reception among the church’s right wing than does Francis.”

She added, “The fact that the report has virtually nothing critical to say about Francis — who is described as inheriting the matter from his two immediate predecessors and assuming they had investigated and settled it — while providing an unsparing account of Benedict XVI and especially John Paul II’s errors in handling it will do little to allay those concerns.”

In a second column, focusing on steps the Catholic Church could take to address clergy sex abuse, Breunig said: “Pope Francis has since expanded the church’s definition of ‘vulnerable adults’ from those without the mental or physical capacity to resist sexual advances to include those who have ‘some deprivation of personal freedom,’ which could include seminarians and junior priests who rely on their bishops for ordination, promotion and favorable appointments.”

The church, she added, “can continue to fight legislation that would empower victims to seek redress and respond to abuse long after the fact, such as the suspension of statutes of limitation in sex abuse cases. Or it can confess the way it asks us to confess, and repent the way it asks us to repent: fully, openly, over and over again, as often as it takes, as painful as it is.”

Within the Catholic press, the National Catholic Reporter, in what it termed an “explosive” Vatican report, said: “The Vatican places an abundance of responsibility on Pope John Paul II,” adding the report’s executive summary posits the pope “may have been blinded by his own prior friendship with McCarrick in the 1970s, and by his experience in communist Poland, where authorities would sometimes level false accusations against bishops in order to try and damage the church’s reputation.”

In a separate National Catholic Reporter article on charges stemming from the report’s release, Catholic University of America canon law professor Kurt Martens suggested Archbishop Carlo Maria Vigano, former Vatican nuncio to the United States, could be made subject to penalties under Pope Francis’ 2019 apostolic letter  “Vos Estis Lux Mundi,” as the archbishop — as outlined in the report — ignored a request from Cardinal Marc Ouellet, head of the Vatican’s Congregation for Bishops, in 2012 to further investigate allegations against McCarrick. “Clearly, Vigano did not do his job,” said Martens.

Our Sunday Visitor carried Catholic News Service’s account, which said McCarrick was able to rise through the ranks “based on personal contacts, protestations of his innocence and a lack of church officials reporting and investigating accusations.”

The National Catholic Register carried coverage by Catholic News Agency; both are owned by EWTN. One story quoted Jan Ruidl of Milwaukee, who herself had been abused by clergy, as saying after reading the Vatican report that there was “an extremely high level of denial” in the hierarchy about McCarrick, especially the allegations that he had abused adults.

The Catholic Standard, newspaper of the Archdiocese of Washington, carried a statement from Cardinal-designate Wilton D. Gregory issued Nov. 10. He said he, like most people, had only just received the report and had not “had an opportunity to review it carefully.”

“By virtue of the simple fact that this investigation had to be conducted and this report had to be written, my heart hurts for all who will be shocked, saddened, scandalized and angered by the revelations,” he said, adding the report’s disclosures are necessary for “true redemptive healing” to begin for abuse survivors and for the church itself.

Catholic New York, the archdiocesan newspaper, posted a Nov. 10 statement from Cardinal Timothy M. Dolan, who gave credit to Pope Francis for allowing the archdiocese to investigate the allegations made against McCarrick, as well as to victims who lodged complaints with the archdiocese.

“You took us at our word that we wanted to assist you, and in so doing, you helped bring this matter to light, proving that anyone who has abused a minor, even a cardinal, will be punished,” Cardinal Dolan said.

He also credited the Vatican, which “followed through on its assurance that, at the request of the American bishops, a complete study of the dismal case of Theodore McCarrick would be undertaken and published.”

In a Nov. 10 letter to Catholics in the Metuchen Diocese, its bishop, James F. Checchio, said the scars left behind by McCarrick’s abuses may fade with time but never fully heal.

In his own letter to Catholics in the Archdiocese of Newark Nov. 10, Cardinal Joseph W. Tobin said the “unprecedented and substantial” report is “a significant and powerful step forward in advancing accountability and transparency regarding sexual abuse.”

“Beyond the victims themselves, failures by some leaders in the Catholic Church have wounded many including the families and loved ones of victims and the faithful,” Cardinal Tobin added.