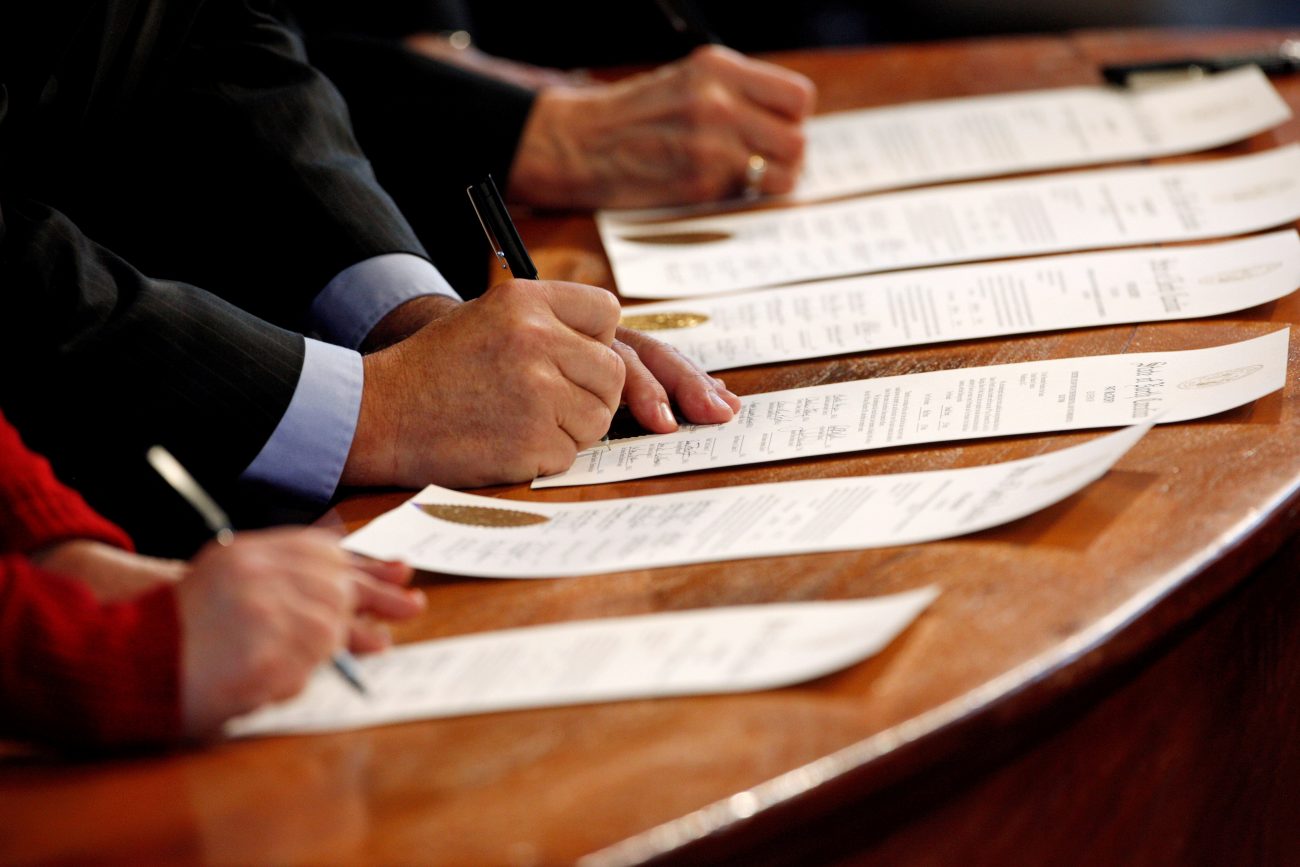 In this 2016 file photo, representatives of the North Carolina Electoral College sign the Certificates of Vote in the state Capitol in Raleigh Dec. 19. (CNS photo/Jonathan Drake, Reuters)

BALTIMORE (CNS) — As Election Day dragged into Election Week and beyond, the days of anxious waiting and dubious tea-leaf reading may have reminded many Catholics of the selection process for a new pope.

But years of well-meaning democratic reforms to the Electoral College system have stripped away these similarities, causing some critics now to question whether this system should even continue.

Michael Towle, a professor of political science at Mount St. Mary’s University in Emmitsburg, Maryland, said it all boils down to federalism.

“The strongest argument is a constitutional one. That is that we are a federal republic and that it preserves the role of the states because, in order to win the presidency, you have to go from state to state,” he told the Catholic Review, the news outlet of the Archdiocese of Baltimore.

As of Nov. 11, Democrat Joe Biden had garnered 290 electoral votes, 20 more than the amount needed to win the presidency. Republican President Donald Trump had 217, but had yet to concede to Biden.

Trump’s campaign launched a number of lawsuits in some battleground states, including Pennsylvania, claiming irregular voting tabulations, including the counting of “illegal votes.”

The Electoral College is a group of 538 people. The number of electors each state holds is determined by the size of its congressional delegation. In addition, the District of Columbia is allotted three electors. For example, Maryland has 10 electors, one for each of the eight congressional districts and one for each of its two Senate seats.

Although keeping the states front and center was the primary motivation, Towle said, expertise also played a role.

The framers of the Constitution envisioned these electors would be insulated from popular pressure. As respected pillars of the community, they would be highly educated, well-informed and committed to the common good much like the cardinals of the Catholic Church, who are entrusted with selecting the pope. In theory, this body could act as a backstop against a hasty, ill-informed choice of the people.

“It was intended to create a sort of informed, deliberative body that would make a wise choice. It was not meant to directly convey the wishes of the average Joe,” said Julie Varner Walsh, a political podcaster and former legislative lobbyist for the Maryland Catholic Conference. “So, the original design for the Electoral College is nothing like what it is today.”

Being an elector is now mostly a ceremonial position that involves giving votes to the candidate who won the popular vote in their state. Thirty-one states and the District of Columbia have laws prohibiting electors from voting contrary to the popular vote.

A chief complaint against the Electoral College is that it gives small states with low populations disproportionate amounts of power. For example, in 2016, a Wyoming voter had 3.6 times more influence in the presidential race than a California voter because of the Electoral College. But that may be by design, Towle said.

“The one thing that James Madison was most concerned about was the tyranny of the majority. And his concern (was that) if the majority controlled everything, it would eventually crush the minority,” said Towle, a parishioner at St. John’s Parish in Westminster,  Maryland.

However, Towle warns it is equally problematic if the minority controls everything.

Only five times in U.S. history has the president lost the popular vote but won the electoral vote, but it’s happened twice in the past 20 years, in 2000 and 2016.

Also, some say the system allows competitive swing states to set too much of the agenda. Issues such as fracking dominated the 2020 presidential debates because of its importance to the key state of Pennsylvania, overshadowing an issue such as climate change, a topic critical to fire-ravaged states of California and Oregon.

The Electoral College also has its supporters who say major cities already dominate most areas of American life from finance to culture to technology. Giving small states and rural areas more say in politics helps level the playing field.

“A small-state person would argue that if this system didn’t exist, then the only concerns would be the concerns of California,” said Walsh, a parishioner of St. Peter the Apostle in Libertytown, Maryland.

Towle said part of the reason that the Electoral College has endured is that there is no good alternative. A purely national vote could give rise to multiple parties, potentially splitting the vote so a president could be elected without enough support of the country to effectively govern.

He also cautions against solving problems that have developed relatively recently with the most permanent of fixes: changing the Constitution.

Walsh said doing away with the Electoral College isn’t the only option. Other states could take the lead of Maine and Nebraska and award their electoral vote proportionally rather than winner take all. For example, in Maine, Biden won the state overall but lost Maine’s rural 1st Congressional District. Conversely, Trump won Nebraska overall but lost the state’s 2nd Congressional District, centered on Omaha.

However, Towle said proportional systems in states larger than Maine and Nebraska, could lead to more gerrymandering — the process of drawing congressional districts to benefit a particular political party.

“I do think it would be good for Americans to consider whether this vestige of our 18th-century self is well suited to our 21st century,” said Walsh, a former political columnist for the Catholic Review. “I don’t know the answer to that, but I think it’s a conversation we should be having.”

Swift is social media editor for the Catholic Review, the news outlet of the Archdiocese of Baltimore.