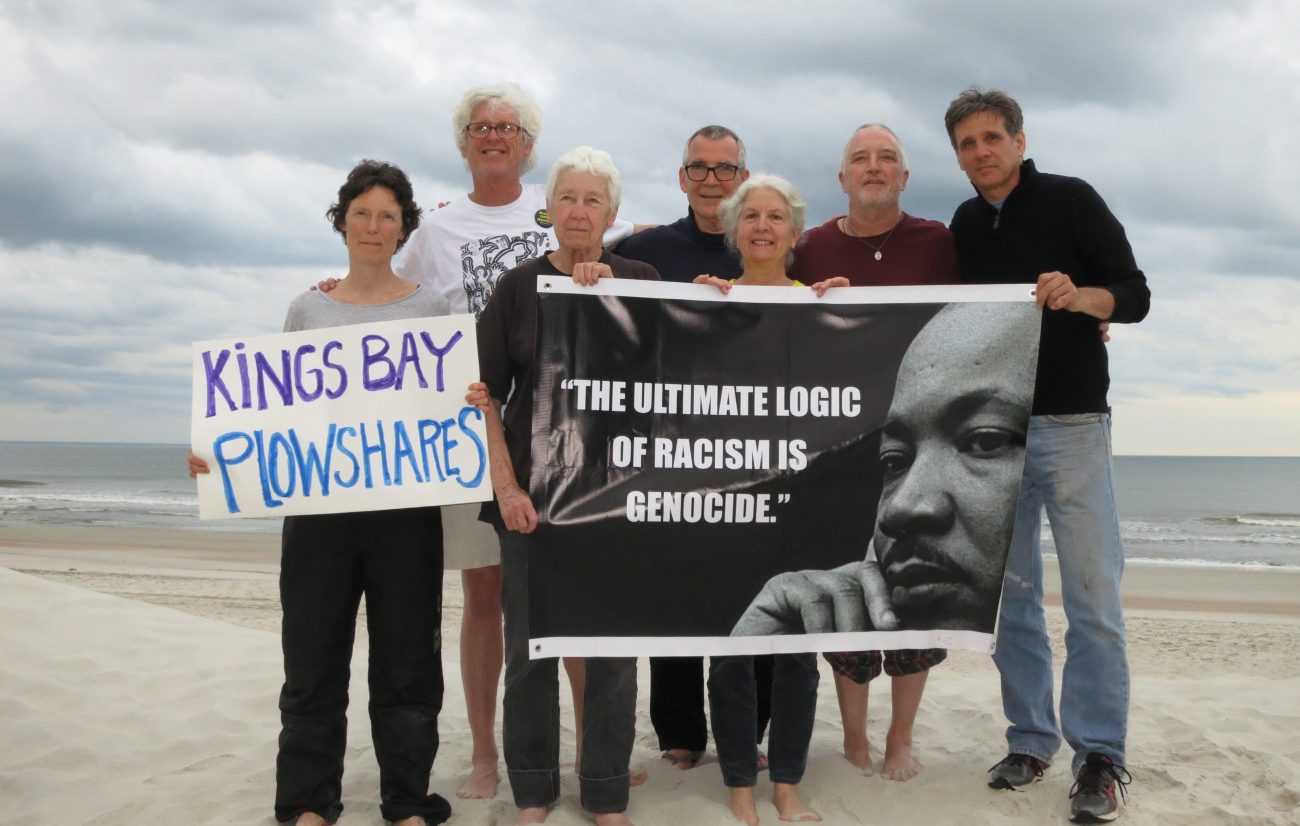 Wood said she took into consideration Hennessy’s work with Maryhouse Catholic Worker in New York, her age and the minor amount of damage she caused at the submarine base in deciding to reduce the length of the sentence from the court’s probation department recommendation of 18 months to 24 months.

The hearings in the U.S. District Court for the Southern District of Georgia in Brunswick had been delayed several times because of the coronavirus pandemic.

Wood also ordered the defendants to pay a share of the $33,503.51 the Navy said it cost to clean and repair the damage caused by the symbolic disarmament action.

Acknowledging that Trotta has limited income and lives a life of voluntary poverty, the judge ordered him to pay $25 per month until his share of restitution is made.

The sentences included three years of supervised probation that will begin as each of the religious peace activists complete their prison terms.

Wood ordered Hennessy to report to prison in 30 days.

Trotta, who agreed to report to prison within 30 days, told the court he intended to immediately appeal the sentence. Grady asked to self-report in 90 days. Because she is being credited for time served prior to the trial, she may have to be behind bars for as little as six months.

Grady’s attorney, Joe Cosgrove, asked Wood to consider an alternative to prison confinement for the longtime peace activist because of her underlying health concerns. He said Grady is a two-time cancer survivor and suffers from Lyme disease and she is concerned about contracting COVID-19, the disease caused by the coronavirus, which could prove deadly in prison.

A third defendant, Martha Hennessy, granddaughter of Dorothy Day, co-founder of the Catholic Worker movement, was scheduled to be sentenced Nov. 13.

On Oct. 25, 2019, a 12-member jury convicted the group of felony charges of conspiracy, destruction of government property and depredation of property and a misdemeanor charge of trespass.

The seven activists entered Naval Submarine Base Kings Bay in southeastern Georgia the night of April 4-5, 2018, recording their protest on portable video equipment. Their action included reading Scripture, prayer and spray-painting peace messages on a missile display and a building exterior.

The base is the East Coast home port of the Trident submarine, which experts believe is armed with multiple nuclear-tipped missiles. Government policy calls for neither confirming nor denying the existence of nuclear weapons at the base.

During a closing statement, Hennessy told the court she joined the symbolic protest at the submarine base because she believes nuclear weapons are illegal and that possession of them is a sin. She explained she had no criminal intent, but that her action was an attempt to “prevent another nuclear holocaust.”

“I am attempting to help transform the fundamental values of public life,” she said. “I am willing to suffer for the common good and for the sin of not loving our brothers and sisters, a condition that leads to war.”

Four character witnesses testified about Hennessy’s commitment to family, peaceful living and her importance to Maryhouse.

Trotta said in his closing statement he has undertaken his protests as a “deliberate nonviolent response to the divine gift of my conscience.”

Trotta also presented three character witnesses, who testified about his work at St. Joseph House Catholic Worker in lower Manhattan and his long history of nonviolent actions against war and U.S. foreign policy.

Edward “Bud” Courtney, a St. Joseph House volunteer, said he has known Trotta for 18 years and that he and others in the Catholic Worker community consider him to be “the elder” from whom they sought advice.

“Day after day, year after year, Carmen has come to know and help thousands,” Courtney said. “His compassion is somewhat legendary. People just come because he helps. His going away (to prison) will be a big loss to the community.”

Trotta’s older brother, Louis, an attorney, described his sibling as “very much an idealist.” He credited his younger brother for providing much-needed care for two years for their elderly father, who recently died at age 93.

“He’s internalized anything he’s ever been taught about what’s good and right,” Louis Trotta testified. “His coaches taught him to give 110%, and his teachers taught him about human rights, and his faith taught him about being his brother’s keeper. He internalizes that in a way that most people don’t. I think that should be taken under consideration.”

In her decision, Wood said she recognized how valuable Trotta was to the people he serves at the Catholic Worker and the closeness he shares with his family and took that into consideration in her sentencing order.

Grady said her action to oppose nuclear weapons is rooted in her love and gratitude for being a mother, the desire to work for justice, the ability to share meals with poor people in her hometown and to follow the biblical call that says “whatsoever you do to the least, that we do to Jesus.”

She said she considers those who are the “least” to include those who are “being killed in our name” around the world. “Because when we kill others, and harm others, we do that to Jesus,” she said.

Acting to symbolically disarm the Trident submarine was undertaken because it “is killing and harming in my name,” Grady told the court.

In October, Wood sentenced two other participants in the protest. Catholic Worker Patrick O’Neill of Garner, North Carolina, was sentenced to 14 months in prison followed by two years of supervised probation. He has appealed his sentence.

Jesuit Father Steve Kelly of the Bay Area in California received a 33-month term minus time served since the incident, plus three years of supervised probation for his role in the incident.

In June, defendant Elizabeth McAlister of New London, Connecticut, was sentenced to time served after spending more than 17 months in prison awaiting trial. In addition, she was sentenced to three years of probation. She also was ordered to pay her share of restitution at the rate of $25 per month.

The sentencing for the final activist, Mark Colville of New Haven, Connecticut, another Catholic Worker, is scheduled in the court Dec. 18.