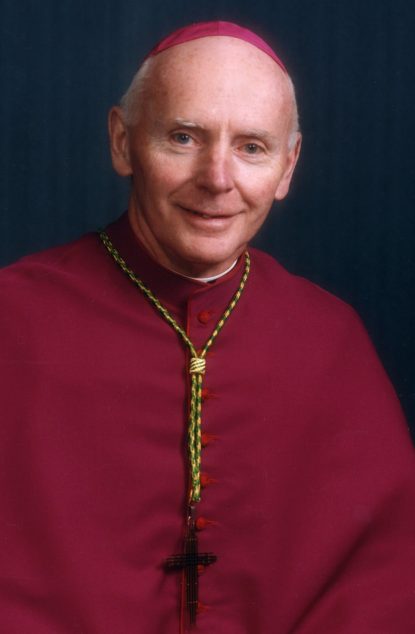 Bishop Edward T. Hughes, who served as the bishop of Metuchen, N.J., from 1987-1997, is pictured in an undated official photo. Bishop Hughes was one of four U.S. bishops who in 2000 replied to the Vatican’s apostolic nuncio about former Cardinal Theodore E. McCarrick. Bishop Hughes died in 2012. (CNS photo/courtesy Diocese of Metuchen)

WASHINGTON (CNS) — When the papal nuncio to the United States was asked to investigate rumors about Theodore E. McCarrick’s sexual activities, he consulted the bishops who had lived in close contact with, or lived in close quarters with the archbishop, on the theory that they would be the people most likely to hear or know something of substance.

Three of the four bishops did not tell what they knew, according to the McCarrick Report released Nov. 10.

That has led to a lack of trust in the church among priests and seminarians, said one of the priests interviewed and a current seminary instructor.

In 2000, Archbishop Gabriel Montalvo, apostolic nuncio, was investigating whether Pope John Paul II should promote McCarrick, then the archbishop of Newark, N.J., to Washington. He asked the bishops “to give me in writing, in the strictest observance of the pontifical secret, any factual information you have relative to any serious moral weakness shown by Archbishop McCarrick, either in the past or in the present. Such factual information may include direct knowledge of times or places, as well as the names, and if possible, the addresses of persons who might have that knowledge. Every other remark or observation that you consider as just and appropriate in an effort to obtain as objective a clarification as possible of this question will, of course, be appreciated.”

Bishop James T. McHugh of Camden, who lived with McCarrick in the cathedral rectory in Newark from 1986 to 1989, responded, “I never witnessed any improper behavior on the part of Archbishop McCarrick, but at times his familiarity was imprudent.”

Bishop John M. Smith of Trenton responded, “During my years of residency at Sacred Heart Cathedral and as vicar general of the Archdiocese of Newark or subsequently, I have never heard anyone make a substantiated accusation of immoral behavior against Archbishop McCarrick, nor have I any evidence of serious moral weakness shown by Archbishop McCarrick.”

Yet Msgr. Dominic Bottino, a diocesan tribunal judge and hospital chaplain in the Diocese of Camden, described a January 1990 incident at which Bishop McHugh and Bishop Smith, then auxiliary bishop of Newark, were present.

The monsignor, McCarrick, Bishops McHugh and Smith and a young cleric were eating dinner in an otherwise-empty New Jersey catering hall. Msgr. Bottino said he observed McCarrick “moving his fingers up and down on (the cleric’s) crotch” for several seconds. As McCarrick was touching him, the young cleric looked as though “he was paralyzed,” with his eyes “wide open” like “a deer in the headlights.”

In an interview for the report, Msgr. Bottino stated “to a moral certainty” that Bishop McHugh, seated on the young cleric’s immediate right, had seen McCarrick’s misconduct, and that Bishop Smith had understood what was happening as well.

In his response to the nuncio, Bishop Edward T. Hughes, a former Philadelphia priest and auxiliary bishop who became McCarrick’s successor in Metuchen, wrote that he had “no factual information that would clearly indicate any moral weakness on the part of Archbishop McCarrick.”

He did say he was troubled about two allegations, but cast doubt on the credibility of the priests who had come to him with their stories and the psychologists who backed them up. After one priest described sexual encounters with McCarrick, Bishops Hughes advised him to “forget about McCarrick’s misconduct and to forgive McCarrick ‘for the good of the church,'” the report said.

Only Bishop Vincent D. Breen, who in 2000 headed the Diocese of Metuchen, was forthcoming.

According to the report, after McCarrick initially was taken off the list of possible nominees for the Archdiocese of Washington, Pope John Paul insisted he be put on the list and named him to Washington in 2000.

“I do not consider the report as unfairly pinning blame on Pope John Paul II,” said Benedictine Sister Nancy Bauer, associate professor at the School of Canon Law at The Catholic University of America. “On the other hand, not all of the blame can be attributed to the former pope, and I think that is clear in the report.

“The U.S. bishops who had heard the ‘rumors’ or who received reports, even anonymous reports, about McCarrick’s behavior failed to take effective action,” Sister Bauer said.

She said she teaches seminarians “and I have learned how vulnerable they feel regarding the whole sexual abuse scandal, and especially the misconduct perpetrated on seminarians by Theodore McCarrick and the subsequent failure of bishops to believe the reports of the seminarians who were abused by him.”

She said the bishops “were either naïve beyond believability about why McCarrick regularly arranged to share his bed with seminarians, or they decided that protecting the reputation of their brother bishop was more important than the human dignity and the very vocations of the seminarians. They failed to investigate the veracity of the rumors and reports.

“Rather, they easily dismissed the people who made the reports as unreliable. For example, the Sister of Mercy who, in 1994, reported the rumors to the nuncio was dismissed as ‘wanting to make herself appear important.’ The priest identified as Priest 1 was considered too mentally unstable to be believed,” Sister Bauer said.

“The reality that jumps off the pages of the report is the attempt to keep the whole McCarrick mess contained within a small circle of bishops,” she said, adding, “Now, I understand why Pope Francis keeps attributing the crisis of sexual abuse to excessive clericalism.”

A priest identified in the report as Priest 4 had told Bishop Hughes about the abuse, but said in an interview for the report: “Hughes could not handle it. He did not want to accept that there was sex abuse in the church, much less by a bishop.”

The same priest also said the entire process “profoundly undermined his trust in bishops and the power structure in the church.”

“I spoke up at the time and I think that, if I had been listened to, things might have been different,” he was quoted as saying in a footnote. “I have what I believe to be justifiable anger and frustration, because what happened to me makes it difficult for me to trust bishops, and I know that many other priests feel the same way. Bishops hold so much power over us, and it is so easy for them to turn our lives upside down without just cause. This is real clericalism, the kind of power that may prevent others from coming forward.”

NEXT: Peace activists receive prison sentences for submarine base protest