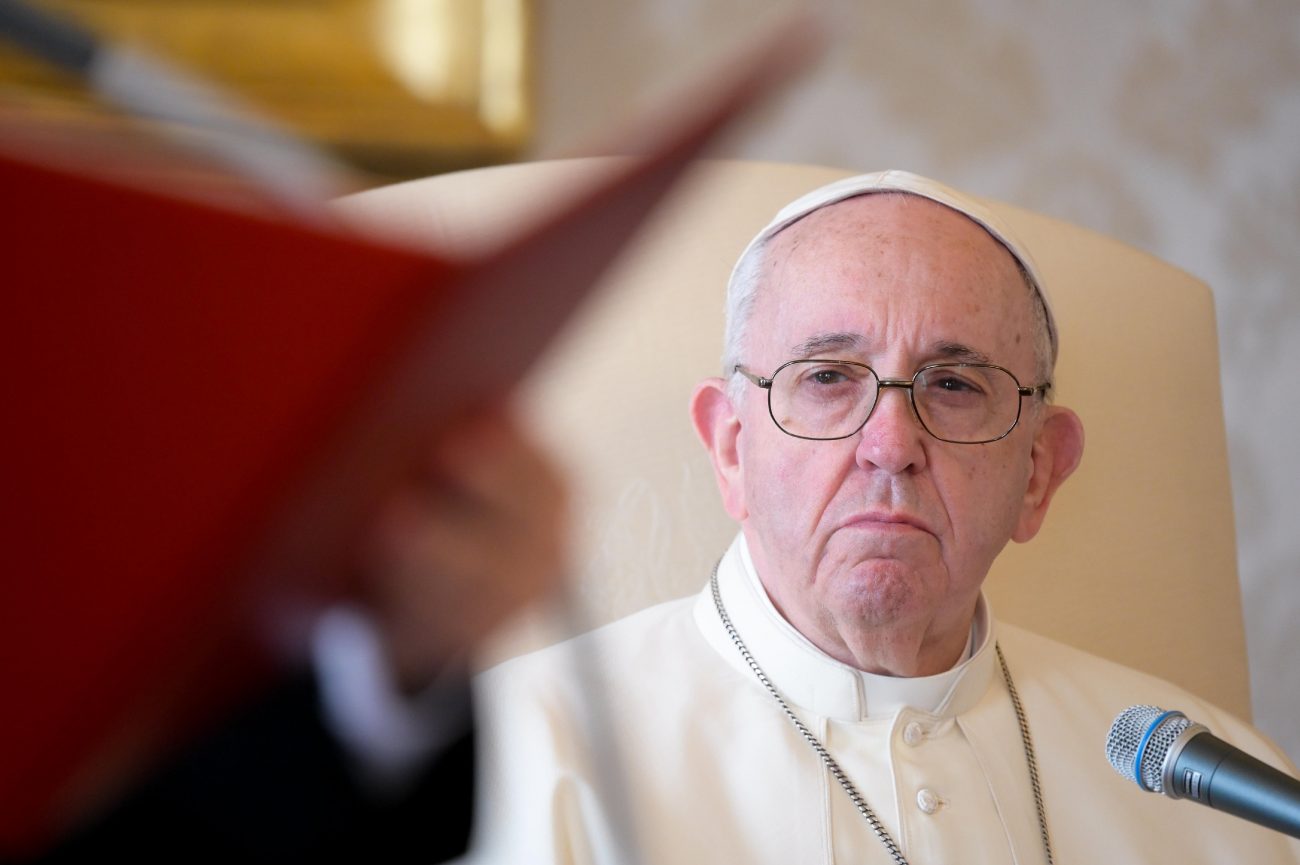 Pope Francis leads his general audience in the library of the Apostolic Palace at the Vatican Nov. 11, 2020. A day after the Vatican released its extensive report on former Cardinal Theodore E. McCarrick, the pope renewed the Catholic Church's pledge to uproot the scourge of sexual abuse. (CNS photo/Vatican Media)

Before concluding his weekly general audience Nov. 11, the pope made his first public statement on the release of the report regarding the “painful case” of the former cardinal.

“I renew my closeness to all victims of every form of abuse and the church’s commitment to eradicate this evil,” he said.

After reading his brief comment on the report, the pope bowed his head and closed his eyes in silent prayer.

The 460-page report, which was published by the Vatican Nov. 10, chronicled McCarrick’s rise through the church’s hierarchal ranks despite decades of accusations of sexual abuse and abuse of power.

Before his comment on the report, the pope continued his series of audience talks on prayer, reflecting on the importance of perseverance.

He began by saying he was told by someone that he “speaks too much about prayer” and that it was unnecessary.

However, he said, “it is necessary, because if we do not pray, we will not have the strength to go forward in life. Prayer is like the oxygen of life; prayer draws upon us the Holy Spirit who always carries us forward. That is why I speak so much about prayer.”

Jesus taught people to engage in “constant dialogue” with God not only with the example of his own prayer, but also with parables that highlighted the importance of perseverance in prayer.

Reflecting on Jesus’ parable of the tenacious person who knocks unceasingly at his friend’s door asking for bread, the pope said that unlike the friend who relents after constant insistence, God “is more patient with us and the person who knocks with faith and perseverance on the door of his heart will not be disappointed.”

“Our Father knows well what we need; insistence is necessary not to inform him or to convince him, but it is necessary to nurture the desire and expectation in us,” the pope said.

Jesus’ parable of the widow who persistently sought and eventually obtained justice from an unscrupulous judge, he continued, serves as a reminder that faith “is not a momentary choice but a courageous disposition to call on God, even to ‘argue’ with him, without resigning oneself to evil and injustice.”

Finally, the parable of the Pharisee who boasted his merits during prayer while the publican feels unworthy to enter the temple reveals that “there is no true prayer without humility,” he said.

Pope Francis said the Gospel encourages Christians to pray always, “even when everything seems in vain, when God appears to be deaf and mute and it seems we are wasting time.”

“There are many days of our life when faith seems to be an illusion, a sterile exertion,” the pope said. “But the practice of prayer means accepting even this exertion. Many saints experienced the night of faith and God’s silence, and they were persevering.”

True Christians, the pope added, do not fear anything but instead “entrust themselves to the Holy Spirit, who has been given to us a gift and who prays with us.”