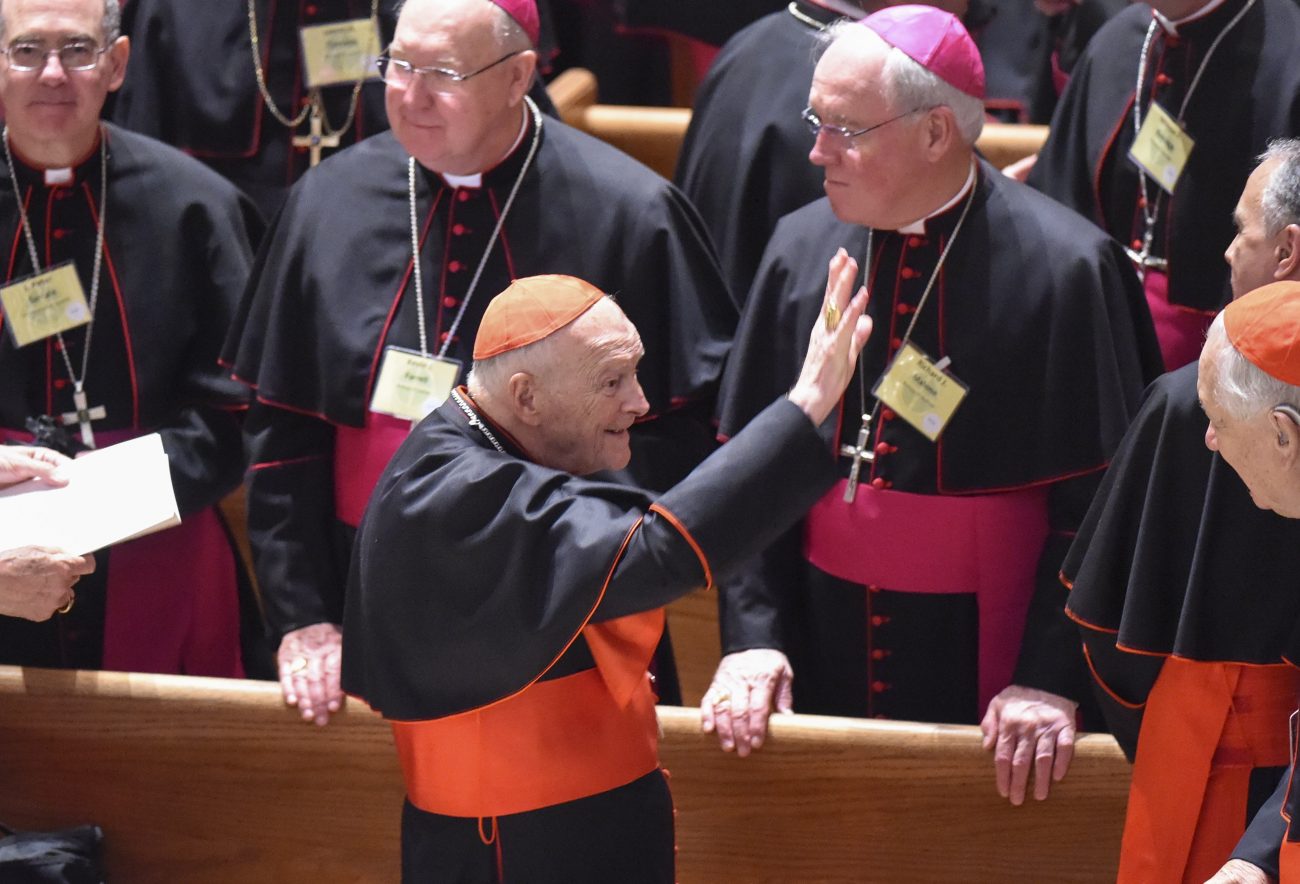 Then-Cardinal Theodore E. McCarrick waves to fellow bishops as he attends a prayer service with Pope Francis and more than 300 U.S. bishops at the Cathedral of St. Matthew the Apostle in Washington Sept. 23, 2015. (CNS photo/Jonathan Newton, The Washington Post, pool)

VATICAN CITY (CNS) — The Vatican Secretariat of State’s report on Theodore E. McCarrick provides a glimpse into how a number of witnesses and victims of the former cardinal’s abuse sought numerous ways to alert church officials and were disturbingly aware their allegations might trigger repercussions.

Over its 460 pages, the report also reveals how much difference 30 years can make when it comes to flagging misconduct and abuse.

The report begins with a New York mother’s account of writing to every U.S. cardinal and the papal representative in the mid-1980s detailing McCarrick’s “dangerous” behavior toward her underage sons. Having left no address or legible name, her red-flag warnings went unheeded.

Decades later, in 2017, when the Archdiocese of New York received an allegation of the sexual abuse of minor by McCarrick in the early 1970s, the report showed how the archdiocese’s now mandatory reporting system and procedures resulted in McCarrick’s eventual dismissal first from the College of Cardinals and, later, from the priesthood.

But for decades in between, the victims and witnesses described in the report recount how they struggled to figure out if and how they should or could make their claims in essentially a no-man’s land for accusations.

Haphazardly handled, ignored or dismissed allegations meant spotty paper trails, ineffective investigations that failed to find “hard” credible evidence and a climate of incessant gossip and rumors about McCarrick’s proclivities that ended up being leveraged by some to paint him as “a victim” of envy and enemies.

A New York woman, called “Mother 1” in the report, describes how McCarrick groomed her family into trusting him and feeling special by receiving his kind and generous attention during the 1970s and ’80s.

But she began to see the then-bishop as a threat when she caught him massaging her sons’ inner thighs in front of her husband, who seemed, in her words, “oblivious to Ted’s behavior.”

While she felt they needed to get him “out of our lives,” her husband “refused to understand,” and she proceeded to witness ongoing inappropriate touching and massaging by McCarrick with her oldest son. But when she found out the priest was bringing alcohol along on overnight trips with her underage sons, she realized he was “a dangerous person” engaged in premeditated actions.

She confronted “Ted” for pressuring her distraught son into going on these trips and, after that, his “charm disappeared.” She said she felt alone in her suspicions and feared McCarrick could retaliate against her children if she made a report.

“Not knowing where to go or who to turn to” in order to warn church leaders about McCarrick, the report said, the woman spent a whole day “feeling pure anger” and writing a letter to each U.S. cardinal and the papal nuncio, Archbishop Pio Laghi, using names and addresses found in the Catholic directory at a library in Metuchen, New Jersey, near McCarrick’s residence.

Her letters, and a series of letters that unknown sources would send to church officials in 1992 and 1993 accusing McCarrick of pedophilia, were anonymous. She did not want to identify herself or her children, just warn others that McCarrick had “an attraction to boys” by including all events she personally witnessed.

Her fear and anxiety over potential repercussions gave way to anger when “nothing was being done” and her letters seemed ignored. The report said no originals or copies of her letters were ever found.

During her interview for the report, she said she had wanted to go public in the early 1990s, but her one son insisted McCarrick’s behavior was only “creepy” and “uncomfortable,” not actual abuse. However, she said, she “regretted every day” not acting more firmly earlier.

The report also goes into detail about the experiences of several seminarians and priests, who also sought to alert people in the church about their bishop’s behavior.

“Priest 1” was repeatedly regarded as unreliable because of his own admission of abusing two minors. However, the psychologists who treated and worked with “Priest 1” found his claims of being a victim of McCarrick credible and told Bishop Hughes and others of their assessments.

The allegations by “Priest 1” reached the Congregation for the Doctrine of the Faith between 2004 and 2005 after he petitioned the office for recourse concerning restrictions on his ministry. That information apparently reached Pope Benedict XVI, who then reversed his decision in 2005 to extend for two years the 75-year-old McCarrick’s term in Washington, D.C., and instead to have him step down.

McCarrick negotiated the terms of his retirement with Cardinal Giovanni Re, then head of the Congregation for Bishops, to be after Easter 2006.

Although there were rumors he had been a victim, “Priest 2” avoided media inquiries in 2002 because he had left the priesthood, started a family and was not prepared to “turn my life upside down.”

By 2004, his signed statement alleging sexual harassment by McCarrick had gone to the Diocese of Pittsburgh’s review board and to then-Bishop Donald Wuerl, who sent it to the U.S. nuncio, Archbishop Gabriel Montalvo. The former priest had also informed the Diocese of Metuchen in 2004.

“Priest 2” eventual entered into a confidential settlement agreement in 2005 with the Dioceses of Metuchen and Trenton and Archdiocese of Newark for his claims of sexual harassment by McCarrick. Archbishop John J. Meyers of Newark, who then discovered there had been at least one other settlement by the Diocese of Metuchen, told the nuncio about the 2005 settlement. The Vatican report found no record that “Priest 2’s” statement was ever given to officials in Rome.

“Priest 3,” who said he was sexually assaulted by McCarrick on different occasions in 1991, told his confessor of the abuse in 1993, and his confessor urged him to tell his bishop, Bishop Hughes, which he did in 1994.

The bishop advised him to forgive McCarrick for the good of the church, and the priest did not discuss the incidents again until 2010.

He filed a civil complaint in New Jersey in 2011 regarding both McCarrick and Bishop Paul Bootkoski of Metuchen, and he wrote to the nuncio, Archbishop Carlo Maria Vigano in 2012, who relayed the matter to Cardinal Marc Ouellet, head of the bishops’ congregation, who then gave Archbishop Vigano specific instructions on how to investigate the matter further.

“Priest 3” said in the report that he was never contacted again by the nuncio, who instead contacted Bishop Bootkoski, who said “Priest 3” was not credible or reliable.

Msgr. Dominic Bottino, vocations director under Bishop James McHugh of Camden, said he witnessed McCarrick, apparently inebriated, at a small private dinner in a Newark catering hall groping a terrified “young cleric” in 1990 in the presence of the bishop and Auxiliary Bishop John Smith of Newark.

He never told anyone until 2018 when he told his bishop, Bishop Dennis Sullivan of Camden, who then encouraged him to immediately send a written account to the U.S. nuncio, Archbishop Christophe Pierre. He gave his testimony “to relieve any burden of conscience that I had about that incident and to provide information” about McCarrick.

“Priest 4” said that in 1984 and 1985, McCarrick made inappropriate physical contact with him that felt “odd and creepy” but did not seem sexual at the time. However, he said he later was sexually accosted by McCarrick during an overnight stay at the Sea Girt beach house.

“Priest 4” said he told the diocese’s director of vocations, Msgr. Anthony Gambino, who made him feel he had been at fault for making such serious allegations and told him he would need counseling and might not be ordained.

When “Priest 4” repelled the sexual advances of Jesuit Father Edward Zogny, the counselor Msgr. Gambino arranged for, “Priest 4” said he felt the whole thing was a setup with a clear message that complaining about his bishop would be useless.

“Priest 4” said he told his bishop, Bishop Edward Hughes, in 1989 about the sexual assault at the beach house. The bishop was visibly angry and said he would take care of it. The report found no indication that anything of substance was done.

“Priest 4” did not tell anyone else until 2018, saying he had felt he did all he could do since “you couldn’t go higher than a bishop in a diocese.”

He told those compiling the report that “if I had been listened to, things might have been different.”

He said he still feels angry and frustrated and finds it difficult to trust bishops because with his situation, they held so much power over him and others, and that this may be what prevents others from coming forward.

“Bishops need to understand that someone like me is a victim, too, and needs to be listened to, understood and taken seriously,” he said. “To address the problem that McCarrick represents, the hierarchy must not remain passive, simply waiting for victims to come forward, but needs to actively seek victims, whether lay or clergy, and provide them with the assistance they need.”