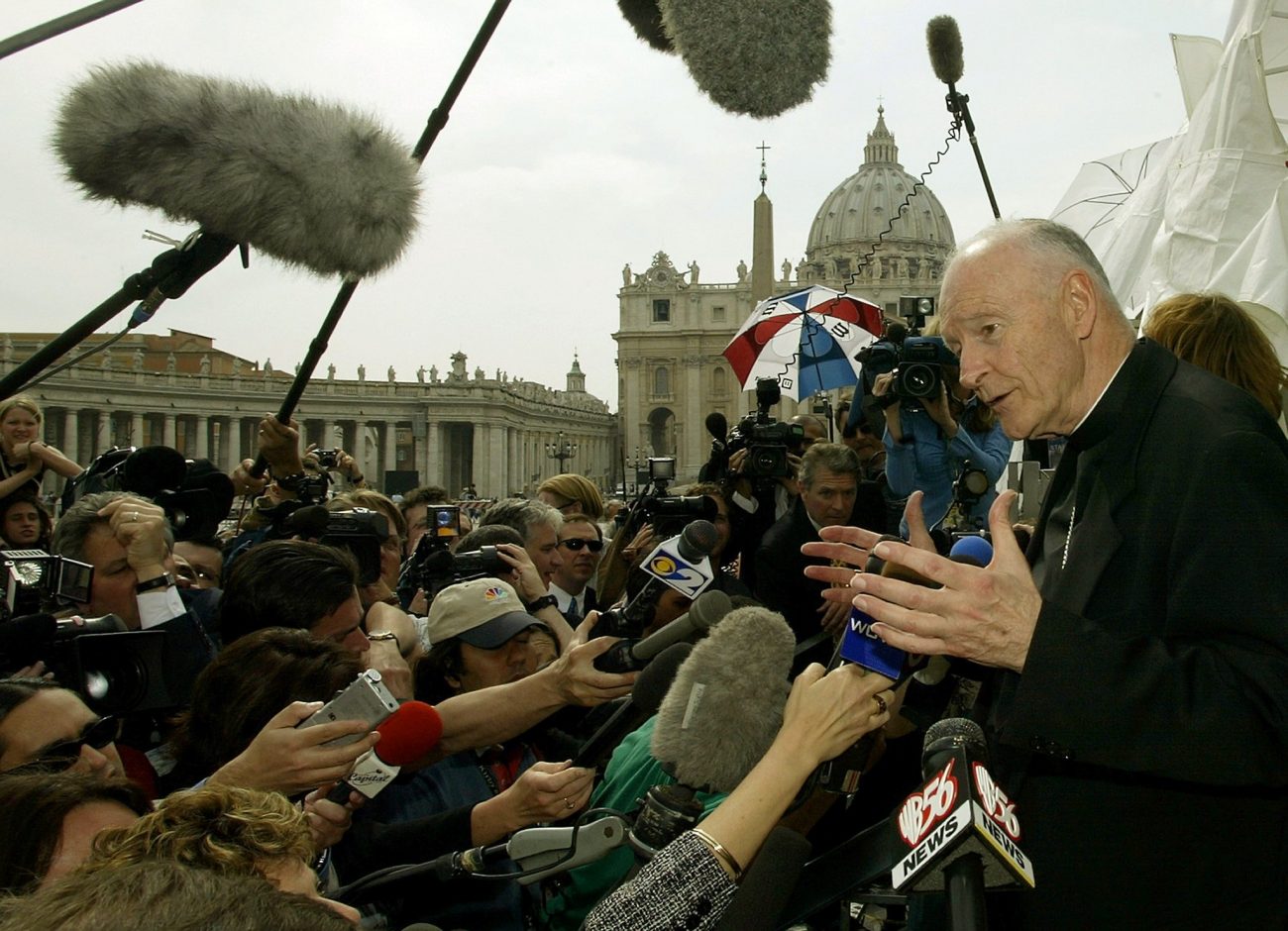 Then-Cardinal Theodore E. McCarrick of Washington faces the press in the shadow of St. Peter's Basilica at the Vatican April 24, 2002. U.S cardinals met for a summit with Pope John Paul II at the Vatican April 23-24, 2002, as the sex abuse crisis unfolded in the United States. Cardinal McCarrick was a key spokesman for the bishops during the summit. (CNS photo/Paolo Cocco, Reuters)

VATICAN CITY (CNS) — Although dogged for years by rumors of sexual impropriety, Theodore E. McCarrick was able to rise up the Catholic hierarchical structure based on personal contacts, protestations of his innocence and a lack of church officials reporting and investigating accusations, according to the Vatican report on the matter.

In choosing then-Archbishop Theodore E. McCarrick of Newark in 2000 to be archbishop of Washington and later a cardinal, St. John Paul II likely overlooked rumors and allegations about McCarrick’s sexual misconduct because of a long relationship with him, McCarrick’s own strong denial and the pope’s experience with communist authorities in Poland making accusations to discredit the church, the report said.

But, in fact, rumors of McCarrick’s conduct, especially knowledge that he had young adult men and seminarians sleep in the same bed with him when he was bishop of Metuchen, New Jersey, led the Vatican to decide it would be “imprudent” to promote him when looking for candidates to become archbishop of Chicago in 1997, New York in 1999-2000 and, initially, of Washington in July 2000, the report said.

The text of the report makes clear that because the allegations involved behavior with adult men, not minors, both diocesan and Vatican officials did not consider McCarrick’s actions abusive, made excuses for McCarrick based on his lack of real family ties and were overwhelmingly concerned with the church’s reputation, not the health or safety of his alleged victims.

The “Report on the Holy See’s Institutional Knowledge and Decision-Making Related to Former Cardinal Theodore Edgar McCarrick” was released Nov. 10; it included an introduction describing the two-year investigation that led to the report’s compilation and gave an “executive summary” of its findings.

In June 2018, the Vatican suspended McCarrick from ministry after an investigation by the Archdiocese of New York found credible a charge that he sexually abused a teenager. McCarrick resigned from the College of Cardinals in July, and in February 2019, after a canonical process found McCarrick guilty of “solicitation in the sacrament of confession and sins against the Sixth Commandment with minors and with adults, with the aggravating factor of the abuse of power,” Pope Francis dismissed him from the priesthood.

That claim led Pope Francis to initiate an investigation into how McCarrick was able to continue to rise through church ranks despite the repeated rumors, anonymous letters, allegations and even settlements with alleged victims.

The report summary said, “No records support Vigano’s account” of his meeting with Pope Francis “and evidence as to what he said is sharply disputed.”

Until the allegations about child sexual abuse were made to the Archdiocese of New York in 2017, “Francis had heard only that there had been allegations and rumors related to immoral conduct with adults occurring prior to McCarrick’s appointment to Washington,” it said.

“Believing that the allegations had already been reviewed and rejected by Pope John Paul II, and well aware that McCarrick was active during the papacy of Benedict XVI, Pope Francis did not see the need to alter the approach that had been adopted in prior years,” the summary said.

While acknowledging efforts made by Archbishop Vigano to bring rumors about McCarrick to the attention of his superiors while Pope Benedict was still in office, the report also claimed the former nuncio was instructed to investigate an allegation in 2012 and failed to do so.

The introduction to the report said it is based on documents found at the Vatican and the apostolic nunciature in the United States as well as interviews — “ranging in length from one to 30 hours” — with more than 90 witnesses in the United States, Italy and elsewhere. They included survivors, Pope Francis, retired Pope Benedict XVI, cardinals, bishops, former seminarians and a mother who was shocked by McCarrick’s behavior with her sons.

In a statement issued with the report, Cardinal Pietro Parolin, Vatican secretary of state, said the contributions of survivors were “fundamental.” The introduction of the report cautions survivors of abuse that certain sections “could prove traumatizing” and warns that some portions of the document are “inappropriate for minors.”

He also said that over the course of the two years it took to complete the investigation and compile the report, “we have taken significant steps forward to ensure greater attention to the protection of minors and more effective interventions to avoid” repeating errors of the past.

Among those steps, he highlighted “Vos Estis Lux Mundi” (“You are the Light of the World”), Pope Francis’ 2019 document on promoting bishops’ accountability and setting out procedures for handling accusations of abuse against bishops.

The report said St. John Paul’s decisions to name McCarrick bishop of Metuchen in 1981 and archbishop of Newark in 1986 were based on “his background, skills and achievements. During the appointment process, McCarrick was widely lauded as a pastoral, intelligent and zealous bishop.”

It also said that, at the time, “no credible information emerged suggesting that he had engaged in any misconduct.” 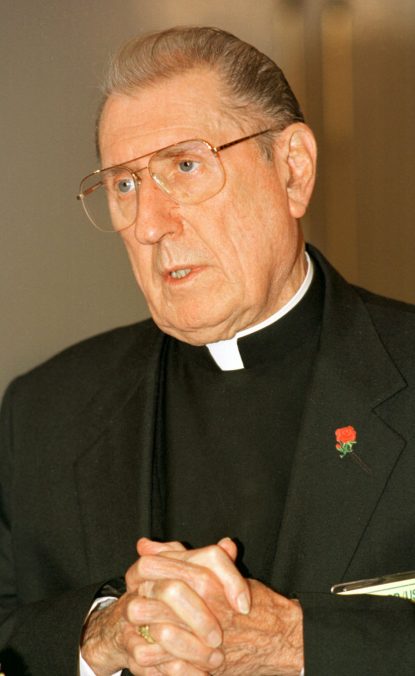 Cardinal John O’Connor of New York is pictured in Washington in this 1999 file photo. A Vatican report about former Cardinal Theodore E. McCarrick states that Cardinal O’Connor wrote a letter in October 1999 about allegations against then-Archbishop McCarrick and that this letter was given to Pope John Paul II. (CNS photo/Nancy Wiechec)

But in October 1999 Cardinal John J. O’Connor of New York wrote to Archbishop Gabriel Montalvo, then nuncio in the United States, summarizing allegations about McCarrick, then-archbishop of Newark. The letter was given to St. John Paul, who asked Archbishop Montalvo to investigate.

“What is now known, through investigation undertaken for preparation of the report, is that three of the four American bishops provided inaccurate and incomplete information to the Holy See regarding McCarrick’s sexual conduct with young adults,” the summary said.

In response to Cardinal O’Connor’s accusations, the report said, McCarrick wrote to now-Cardinal Stanislaw Dziwisz, St. John Paul’s secretary, claiming: “In the 70 years of my life, I have never had sexual relations with any person, male or female, young or old, cleric or lay, nor have I ever abused another person or treated them with disrespect.”

“McCarrick’s denial was believed,” the report said, adding that because of “the limited nature of the Holy See’s own prior investigation, the Holy See had never received a complaint directly from a victim, whether adult or minor, about McCarrick’s conduct.”

“Though there is no direct evidence,” the report added, “it appears likely from the information obtained that John Paul II’s past experience in Poland regarding the use of spurious allegations against bishops to degrade the standing of the church played a role in his willingness to believe McCarrick’s denials.”

In addition, McCarrick had a relationship with the Polish pope going back to his days as the cardinal of Krakow. The summary said, “McCarrick’s direct relationship with John Paul II also likely had an impact on the pope’s decision-making.”

St. John Paul II “personally made the decision” to name him archbishop of Washington and a cardinal, it said.

The report also concluded that now-retired Pope Benedict XVI did not initiate a formal canonical process against McCarrick or even impose sanctions on him because “there were no credible allegations of child abuse; McCarrick swore on his ‘oath as a bishop’ that the allegations were false; the allegations of misconduct with adults related to events in the 1980s; and there was no indication of any recent misconduct.”

However, after initially asking McCarrick to stay on in Washington for two years past his 75th birthday in 2005, the report said, new details related to a priest’s allegations about McCarrick’s sexual misconduct emerged and Pope Benedict asked him to step down in 2006.

At the time, it said, Cardinal Giovanni Battista Re, then-prefect of the Congregation for Bishops, told McCarrick “he should maintain a lower profile and minimize travel for the good of the church.”

“While Cardinal Re’s approach was approved by Pope Benedict XVI, the indications did not carry the pope’s explicit imprimatur, were not based on a factual finding that McCarrick had actually committed misconduct and did not include a prohibition on public ministry,” the summary said.

Archbishop Vigano, while working in the Vatican Secretariat of State, wrote memos in 2006 and 2008 “bringing questions related to McCarrick to the attention of superiors,” the report said. The memos referred to allegations and rumors about McCarrick’s “misconduct during the 1980s and raised concerns that a scandal could result given that the information had already circulated widely.”

The archbishop, the report said, noted that “the allegations remained unproven,” but he suggested opening a canonical process to investigate.

Archbishop Vigano, who was appointed nuncio to the United States in 2011, was “instructed” in 2012 to conduct an inquiry into allegations by a priest who claimed he was sexually assaulted by McCarrick, the summary said.

Archbishop Vigano, it continued, “did not take these steps and therefore never placed himself in the position to ascertain the credibility” of the priest’s claims.

NEXT: Fighting abuse: What Pope Francis has done during his pontificate