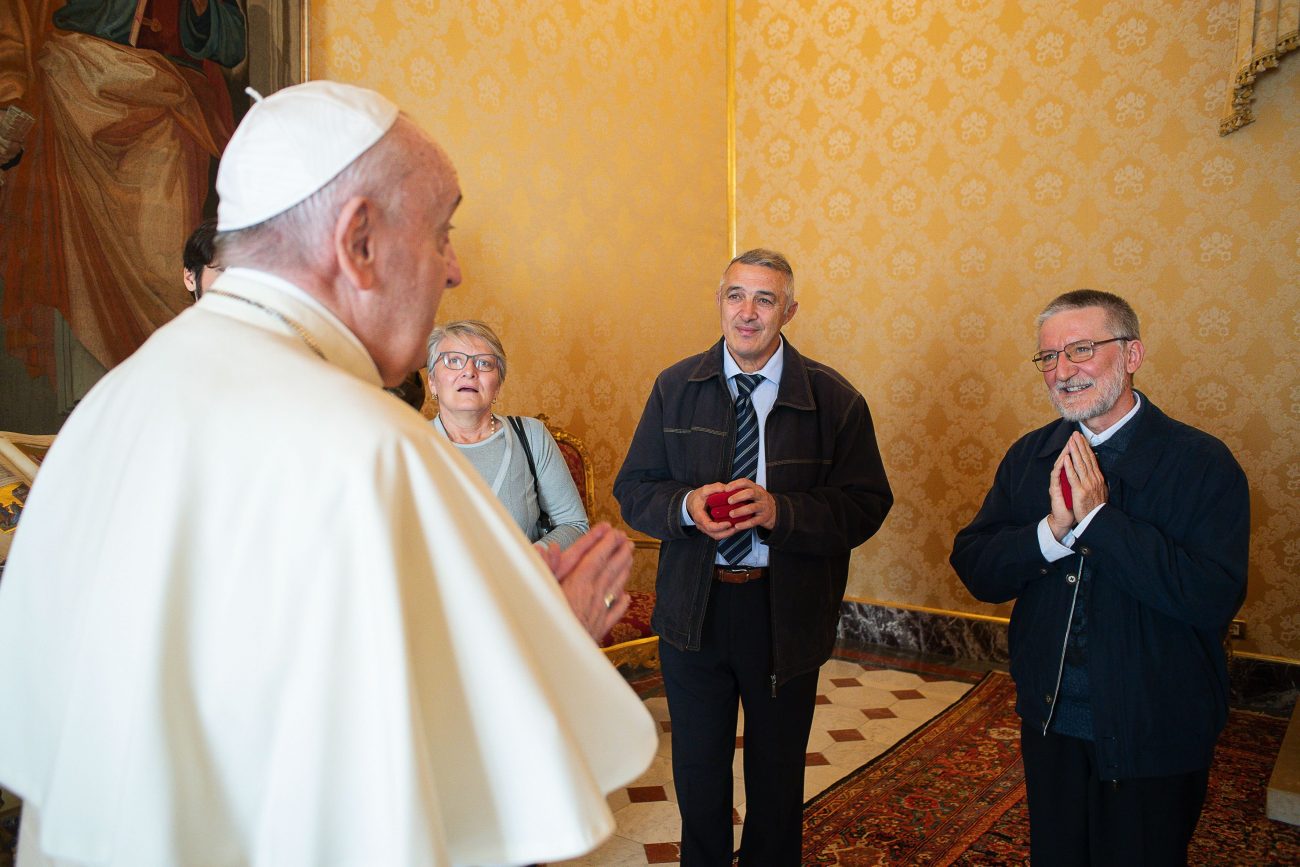 Pope Francis meets Father Pierluigi Maccalli, right, and members of the priest's delegation at the Vatican Nov. 9, 2020. Italian Father Maccalli, a priest of the Society of African Missions, and three other hostages were released Oct. 8 after being kidnapped and held for more than two years in Niger and Mali. (CNS photo/Vatican Media)

VATICAN CITY(CNS) — Pope Francis met with Father Pierluigi Maccalli, a member of the Society of African Missions, who was freed more than two years after he was kidnapped in Niger.

“It was a very, very beautiful meeting. I was very emotional, especially when telling the pope what I had lived through,” Father Maccalli told Vatican News Nov. 9, a month after his release.

Father Maccalli also said he thanked the pope for his prayers “and he answered, ‘We supported you, but you supported the church.’ I was speechless in front of those words; I, a little missionary, and he told me that. I truly have no words,” he told Vatican News.

Father Maccalli was serving in a parish in Bomoanga, Niger, when militant extremists from Jama’at Nasr al-Islam wal Muslimin, a branch of al-Qaida in Mali, kidnapped him in September 2018.

His fate was unknown for nearly two years until a 23-second, proof-of-life video was released by the terrorist group in April.

Father Maccalli and three other prisoners were released Oct. 8 as part of prisoner swap mediated by the Mali government.

Recalling his abduction and two-year captivity, Father Maccalli told Vatican News that during that time, “tears were my bread for many days and were my prayer when I didn’t know what to say.”

Recalling a rabbinical story that said God counted the number of women’s tears, the priest said he began counting his own tears and would pray, “‘Lord, perhaps you may also count (the tears) of men. I offer them to you in prayer to not only water the arid land of the mission but also the arid land of hearts that feel hatred causing war and violence.”

Accompanied by several people, including Father Antonio Porcellato, superior general of the Society of African Missions, Father Maccalli said that during the meeting, he was moved not only by the pope’s words but also by one of the pope’s gestures.

“When we greeted each other, I shook his hand,” he said, “and he kissed my hands. I didn’t expect that.”

The Italian missionary told Vatican News that meeting the pope felt like the “embrace of a father, this father who I carry with me in prayer every day.”

“I never would have thought that a missionary who goes to the peripheries of the world, would one day find himself in front of the pope who sustains the universal church,” Father Maccalli said.