Pandemic leads multicultural parish in Israel to unite in faith 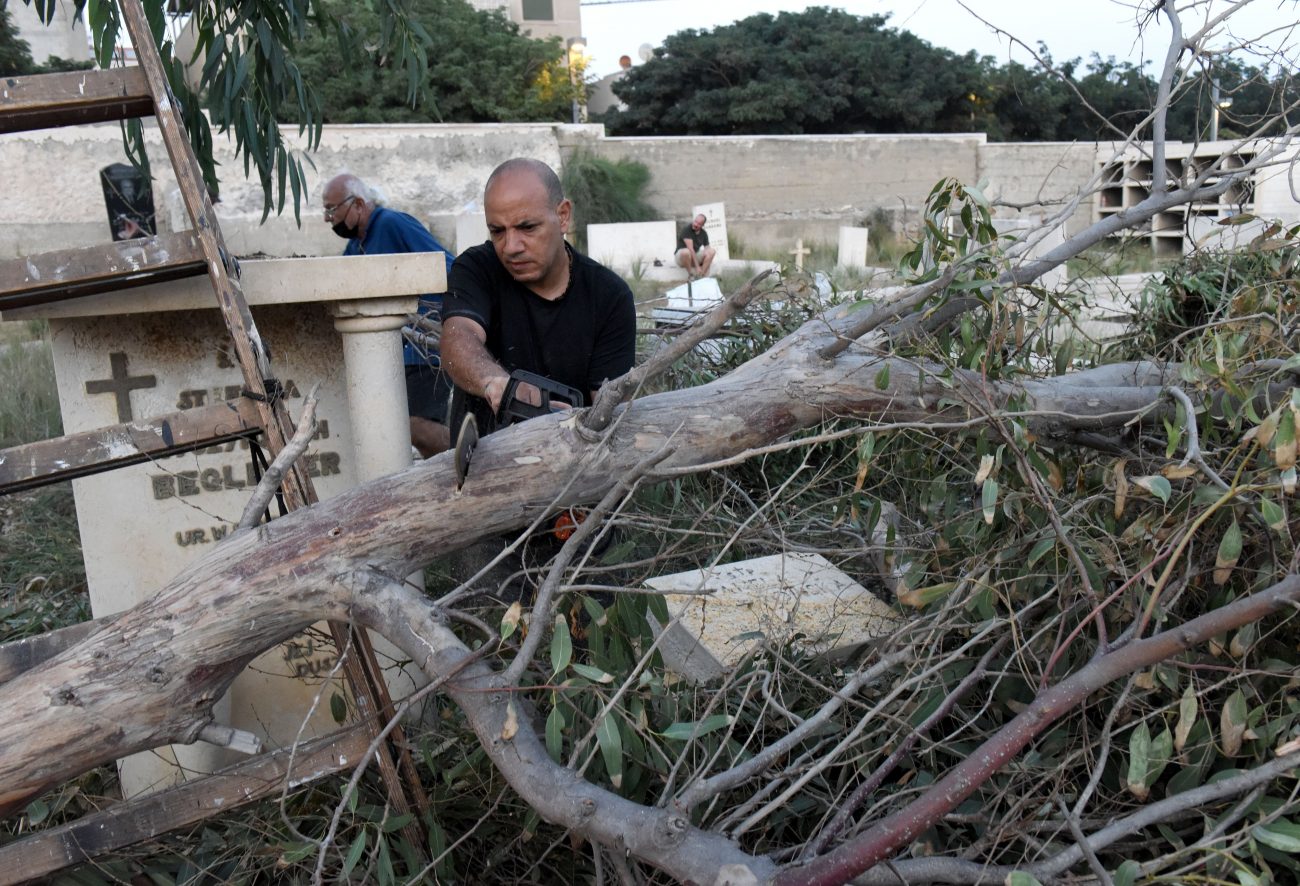 William Hijazin, a member of St. Anthony Church in Jaffa, Israel, cuts tree branches while cleaning up in the parish cemetery Oct. 30, 2020. The parish is made up up of local Arabs, migrant workers mainly from the Philippines and India, and refugees largely from Africa. (CNS photo/Debbie Hill, Reuters)

JAFFA, Israel (CNS) — On the Friday before All Saints’ Day, some Arabic members of St. Anthony of Padua Parish in Jaffa drove to the parish cemetery to celebrate Mass in a recently donated open-air chapel.

Then some stayed on to complete the tidying of the cemetery yard in preparation for the holy day.

It was a sign of community service and united prayer that has emerged under the coronavirus pandemic in the Franciscan-run parish made up of local Arabs, migrant workers mainly from the Philippines and India and refugees largely from Africa, said Franciscan Father Augustin Pelayo, pastor.

While the Arabic community, which is more mobile, took care of the cemetery, the migrants and refugees planned to clean the neo-Gothic style church interior following a recent restoration that included repainting the ceiling. However, the effort was postponed because of concerns about spreading the coronavirus. They plan to try again later.

The entire parish contributed toward the repainting, each member giving to their ability, said Father Pelayo, who is from Mexico.

He told Catholic News Service that each community, while bringing different languages to worship, has “through the Holy Spirit … become one.” 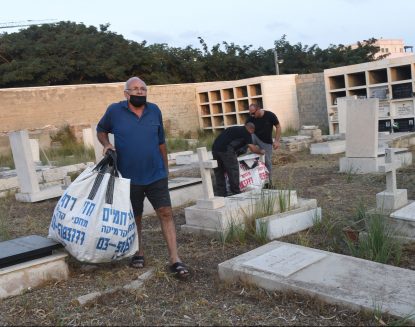 Michel Nasser from the Greek Orthodox Church helps Catholic parishioners at St. Anthony Church cleanup the parish cemetery in Jaffa, Israel, Oct. 30, 2020. The parish is made up up of local Arabs, migrant workers mainly from the Philippines and India, and refugees largely from Africa. (CNS photo/Debbie Hill, Reuters)

Such a united effort has benefited the community, even under the constraints of the pandemic, said Magina Zipagan, 52, a Filipino and parish liturgical leader.

At a time when worshipping together has been difficult because of the pandemic, parishioners have found ways to help each other as well as the wider community. Some donated money. Others volunteered their time and skills. Many members prayed the rosary for protection against the coronavirus.

And the family of an 88-year-old parishioner donated the open-air chapel in his memory after his death in July.

As the lockdown took hold at the start of the coronavirus outbreak in March, Father Pelayo said he was able to reach parishioners by leaving consecrated holy Communion wafers in an envelope at their door. Parishioners were asked to place any remaining crumbs in the envelope and burn it after taking Communion.

Parishioners at times also have been able, with prior coordination with the police and while social distancing, to participate in Mass in the parish’s large garden. Members of Melkite and Greek Orthodox churches have participated in the liturgies as well because of limited space in their churches, the priest said.

Though some of the Arabic parishioners caught the COVID-19 virus, they have since recovered. The migrants and refugees have remained virus-free.

The ability to remain connected as a community has strengthened the parishioners as they realized they can provide help to those members most in need, Father Pelayo said.

“It wasn’t like that before,” noted Gloria Tita, a member of the Filipino community who has been in Israel for 24 years. “We have each other now in the parish, we are grateful for the Arabic community help. (Father Pelayo) united the people.”

Some people in the migrant and refugee communities have lost their jobs and are afraid to leave their homes, so Tita and others in her rosary group take food and pray with them.

Beyond the parish, the community has helped Bethlehem-area Christians who are unable to work and receive no financial assistance from the Palestinian Authority government, Father Pelayo said. Zipagan and others are planning a trip to Bethlehem to assist a senior citizen center.

As dusk fell over the parish cemetery, Zaki Sahlieh, 36, a lawyer, and William Hijazin, 47, an electrician, were cutting and clearing away the final branches of a dead tree, which had stood starkly in the middle of the site.

“When everything was closed, we began to appreciate our communal life. I think COVID helped us to see the church, to understand the importance of living in a community together,” Sahlieh told CNS.

“This period has allowed us to put into practice all our Christian spirit, to respect others, to think of others amongst us who are less fortunate than us, especially the migrants and refugees who have come here seeking a better life. Now we have to stand beside these people who also need help and are a part of this parish despite the difference in color and language,” he said.

A few days earlier, Hijazin had been dangling from a rope from the St. Anthony Church roof to climb down the face of its famous clock tower to change the time as daylight saving time ended. Now he fiddled with the levers of the chainsaw as it sputtered a few times and then finally came to life. 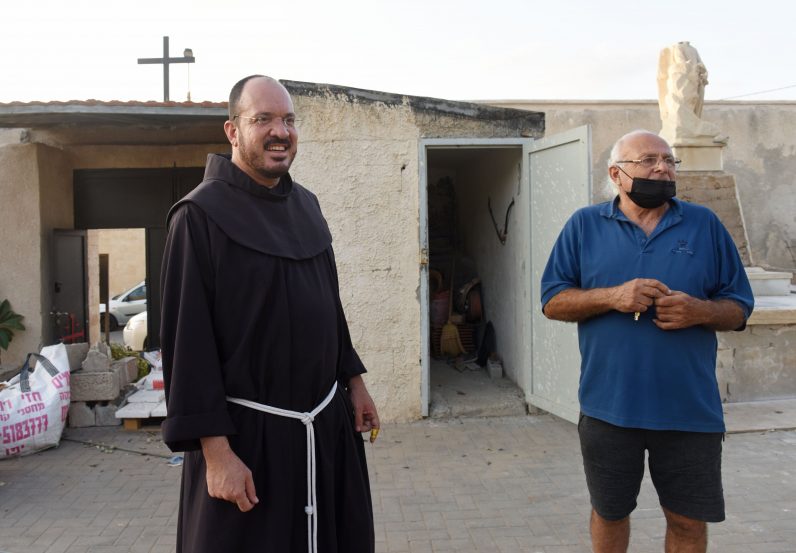 Franciscan Father Augustin Pelayo, pastor of St. Anthony of Padua Parish in Jaffa, Israel, stands with Michel Nasser from the Greek Orthodox Church as they prepare to work in the parish cemetery Oct. 30, 2020. The parish is made up of local Arabs, migrant workers mainly from the Philippines and India, and refugees largely from Africa. (CNS photo/Debbie Hill, Reuters)

NEXT: World Day of Poor initiatives adapting to pandemic