Pope assures Filipinos, battered by storms and floods, of his prayers 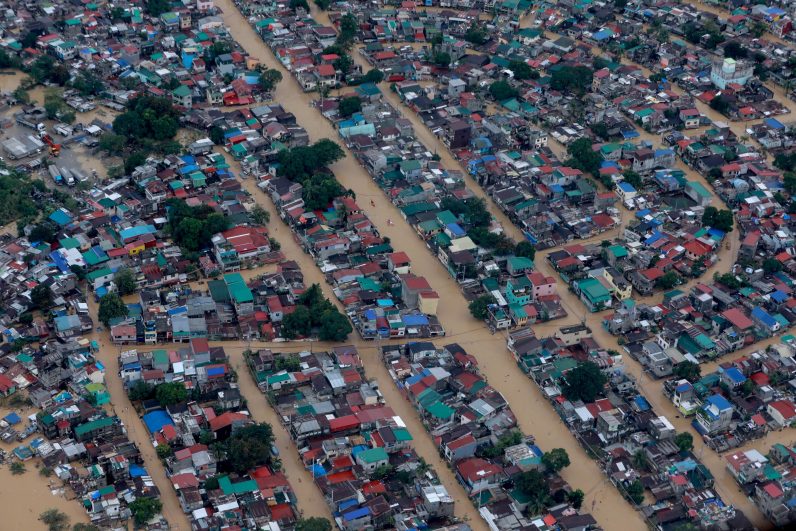 Homes are pictured in an aerial view surrounded by floodwaters in Manila, Philippines, following Typhoon Vamco. Five tropical storms or typhoons have hit the Philippines in a three-week period, including the strongest typhoon since 2013 and the biggest floods since 2009. (CNS photo/Presidential handout photo via Reuters)

His prayer at his Nov. 15 Angelus address at the Vatican came as Filipinos appealed for help and their bishops urged them to support each other in the worst flooding since 2009. Within three weeks, the Philippines was hit by five storms.

“I express my solidarity with the poorest families who have been subjected to these calamities and my support to those who are trying to assist them,” Pope Francis said.

The same day, World Day of the Poor, Bishop Broderick Pabillo, Manila archdiocesan administrator, said the calamities, which affected more than 2 million people in Luzon, called for people to help one another.

“We help not only with what is extra for us, but even with what we need, because others are more in need,” Bishop Pabillo said.

Typhoon Vamco — or Ulysses as it is known in the Philippines — killed at least 67 people and submerged several areas of the capital, Manila, reported ucanews.com.

In eastern metropolitan Manila, water in the Marikina River rose to 72 feet, surpassing Typhoon Ketsana, which left 671 dead in 2009, the United Nations reported.

Ucanews.com said Jesuits and Caritas, the church’s charitable aid agency, appealed for material and spiritual support for victims of Vamco; many residents in Marikina City took refuge on the rooftops of their homes to await rescue. 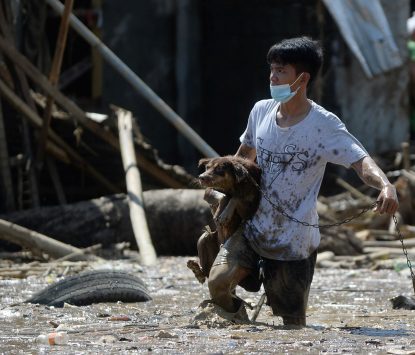 A man carries a dog through floodwaters in Manila, Philippines, Nov. 13, 2020, after flooding caused by Typhoon Vamco. Five tropical storms or typhoons have hit the Philippines in a three-week period, including the strongest typhoon since 2013 and the biggest floods since 2009. (CNS photo/Lisa Marie David, Reuters)

In addition, Caritas Manila is warning against scammers using its name to raise money supposedly for victims of recent calamities. Its executive director, Father Anton Pascual, said some people are posing as Caritas workers and asking for donations, reported CBCP News, official news agency of the Catholic Bishops’ Conference of the Philippines.

On Nov. 16, the Philippine province of Surigao del Sur was hit with a magnitude 6 earthquake, but there were no immediate reports of loss of life.

Ucanews.com reported Typhoon Vamco brought misery to areas still trying to recover from Super Typhoon Goni, which struck Nov. 1. That typhoon was the strongest since Haiyan, which hit in 2013.

Aid agencies such as Caritas and its U.S. partner, Catholic Relief Services, were already helping people from Goni. Agencies said the main needs were for food, shelter, health assistance and mental health and psychosocial support.

“Local authorities in Marikina City cannot conduct rescue efforts alone. Given the weather, we need air support. People are on their rooftops waiting to be rescued,” Teodoro told reporters.

He said many buildings had been submerged and that Marikina City required aid from the national government.

“We are overwhelmed by the amount of need and rescue operations to be conducted. … The water current on the main roads was just too strong for rescue boats. Our city hall, where we stock our resources and supplied, is also flooded,” Teodoro added.

PREVIOUS: Take risks to serve others, pope says on World Day of Poor

NEXT: As 2nd hurricane hits Nicaragua: ‘It has been completely disastrous’