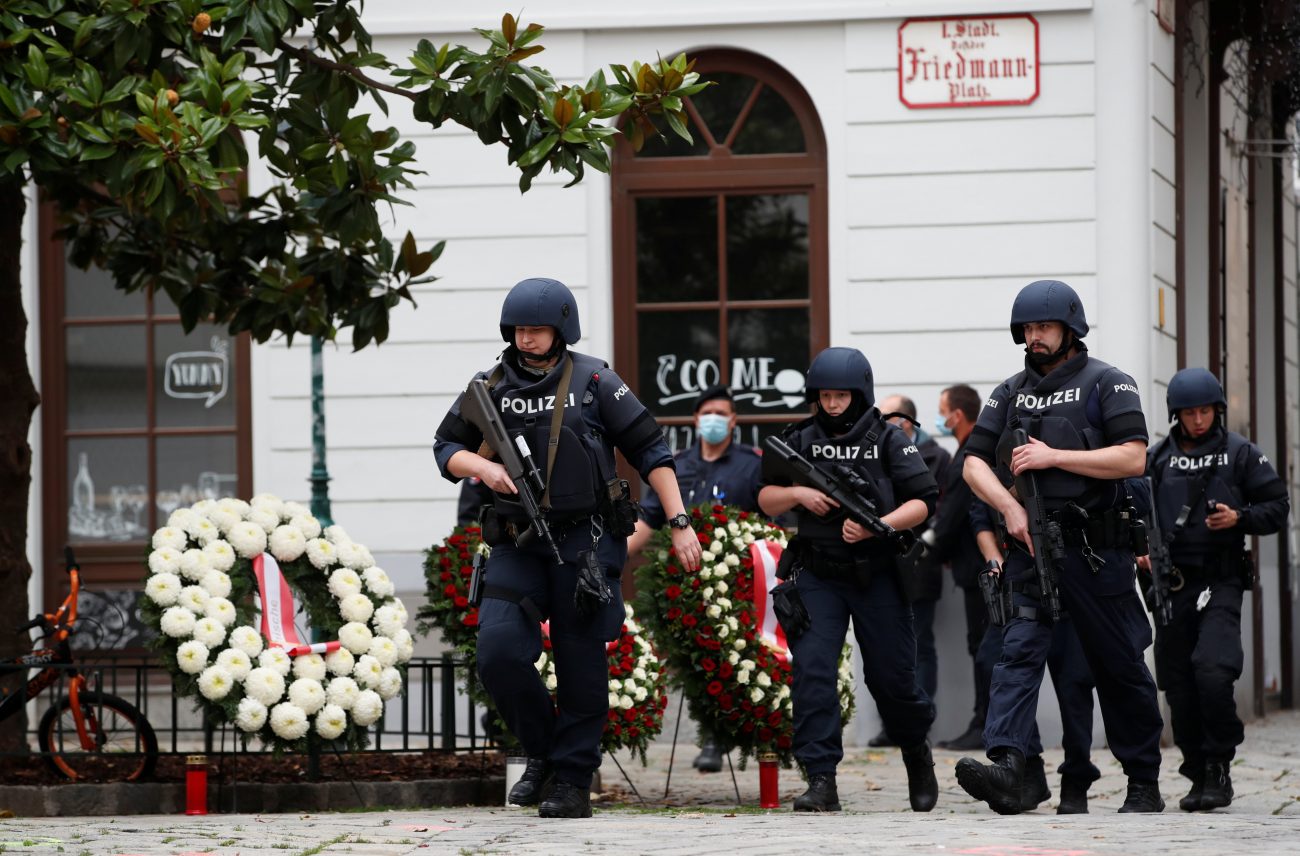 Pope Francis and Austrian church leaders expressed dismay and sorrow after a terrorist attack that left at least five dead in central Vienna, and they urged citizens to uphold key values of tolerance and respect.

Cardinal Pietro Parolin, Vatican secretary of state, told Cardinal Christoph Schönborn of Vienna Nov. 3 that Pope Francis was “deeply shaken” by the news of “the acts of violence in Vienna that caused the death and suffering of innocent people.”

In addition to the dead, at least 17 people were injured in Nov. 2 attacks at six locations close to the Austrian capital’s central Jewish synagogue.

Cardinal Parolin said Pope Francis asked him to express his closeness to the families of the victims and to all Austrians and to assure those who are injured that he prays for their speedy recovery.

“Pope Francis entrusts the victims to the mercy of God and implores the Lord that violence and hatred would end and peaceful coexistence would be promoted in society,” the telegram said.

Cardinal Schönborn said, “We must continue on the path of solidarity, community and consideration — these are values that have shaped Austria.”

“Hatred must never be the answer to such blind hatred, since this only stirs new hatred,” the cardinal said.

In a Nov. 3 interview with the Österreichischer Rundfunk (ORF) state broadcaster, he said Austrian society should never “close in on itself,” adding that he had been moved by many messages of “solidarity and togetherness” from around the world.

Meanwhile, the president of the bishops’ conference, Archbishop Franz Lackner of Salzburg, urged Austrians not to “bow to violence” or “flee into everyday life” and said Catholics would offer “the comfort of compassion and hope.”

“What misguided, inhuman ideology was at work — to shoot randomly at peacefully gathered people?” the archbishop said in a Nov. 3 statement.

“Peace, a basic word of faith recognized by all religions, is a precious good to be defended — if necessary, by authorized law and order institutions.”

Other bishops also made statements, and Vienna church bells rang at midday Nov. 3 in memory of victims. Austrians had a minute of silence and began three days of national mourning. A Mass in memory of the victims was to be broadcast Nov. 3 from Vienna’s St. Stephan’s Cathedral.

Austrian Chancellor Sebastian Kurz called the attacks an assault on the country’s “way of life and democracy.”

Austria’s Islamic Faith Community said Nov. 3 it was “deeply affected and stunned” by the outrage, while Vienna Community Rabbi Schlomo Hofmeister told ORF he had witnessed gunmen firing into bars and restaurants near the synagogue compound.

All synagogues, Jewish schools, shops and kosher restaurants were closed in Austria Nov. 3.

Police confirmed they had shot dead a 20-year-old gunman near St. Rupert’s Church and were hunting other suspects after making arrests during house raids.

It occurred as new restrictions on religious services were introduced Nov. 3 across Austria in line with a partial COVID-19 lockdown.

In his ORF interview, Cardinal Schönborn said maintaining distances because of the pandemic did not require Austrians to “be at a distance with our hearts,” adding that there was no need for discouragement “as long as the warmth in our society is stronger than the coldness of hatred.”

NEXT: Lebanese cardinal: Country’s ‘political authority has murdered its people’