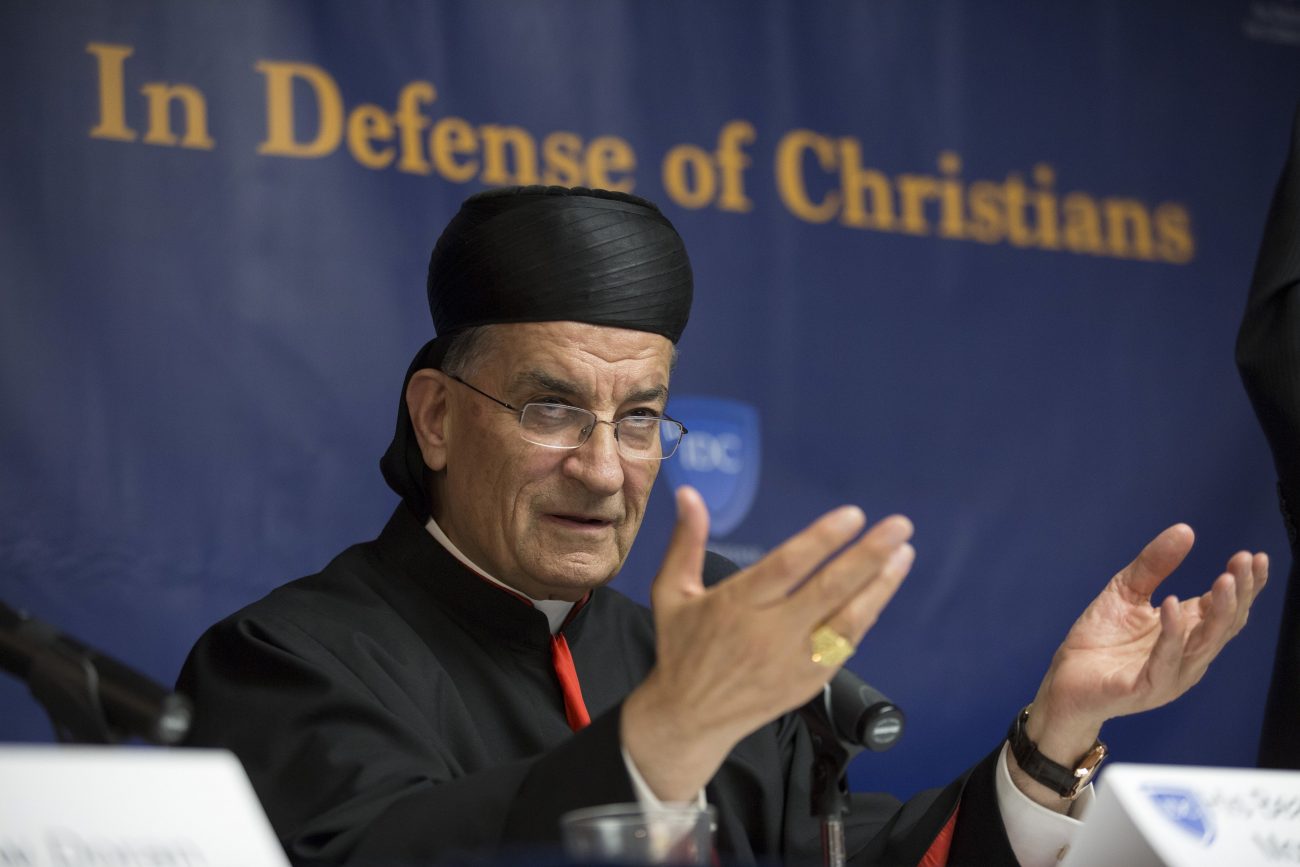 Lebanese Cardinal Bechara Rai, patriarch of the Maronite Catholic Church, is pictured in a 2017 file photo speaking at the In Defense of Christians Summit in Washington.  At the Oct. 31 closing Mass of the synod of Maronite Catholic bishops from around the world, Cardinal Rai stated that due to ongoing corruption and inaction amid deep crisis, Lebanon’s “political authority has murdered its people.” (CNS photo/Jaclyn Lippelmann, Catholic Standard)

BEIRUT (CNS) — Lebanon’s “political authority has murdered its people,” Cardinal Bechara Rai, Maronite patriarch, said at the closing Mass of the synod of Maronite Catholic bishops from around the world.

“The authority has killed its people economically, financially, and in terms of living and development. It thrust them into a state of loss, anger, despair, revolution, emigration and survival,” Cardinal Rai stated.

Lebanon’s economic and social deterioration, exacerbated by the COVID-19 pandemic, has spiraled further out of control since the explosion Aug. 4 at the Beirut port killed more than 190 people, injured more than 6,500 and left more than 300,000 people homeless.

More than half of the Lebanese people now live below the poverty line, and the unemployment rate exceeds 50%.

The Maronite bishops met Oct. 26-31 at the patriarchal seat in Bkerke, north of Beirut.

In their final statement, the bishops expressed their appreciation for the solidarity of the Lebanese people — young people in particular — and for the countries of the diaspora in the aftermath of the port explosion. They thanked the Maronite eparchies worldwide and all the international, ecclesiastical and civil institutions that provide assistance for their support.

The bishops, however, denounced “the absence of the state” and its institutions from carrying out their responsibilities related to the explosion.

The bishops said they “cannot be silent about the failure of the Lebanese state in its official institutions — including ministries and departments concerned, and the Beirut municipality — to deal with the repercussions of the Beirut criminal port explosion,” still, nearly three months after the disaster.

The bishops called for the rapid formation of a “rescue government.” Lebanon has been left without a fully functioning government since Aug. 10, when caretaker Prime Minister Hassan Diab submitted his Cabinet’s resignation over the port explosion.

Prime Minister-designate Saad Hariri is tasked with forming a Cabinet with Lebanese President Michel Aoun, a process that has hit snags.

Under Lebanon’s sectarian-based power-sharing system, the president must be a Maronite Catholic, the speaker of parliament a Shiite Muslim and the prime minister a Sunni Muslim.

The bishops also reaffirmed that Lebanon is a neutral country.

“Lebanon’s neutrality is its strength and the guarantee of its role in the stability of the region, and it confirms Lebanon in its political, cultural and missionary role in the East and West,” the bishops said.

The bishops noted the need for priests to serve Maronite Catholics around the world, particularly in Colombia, Peru and Ecuador, and the need for financial support for pastoral services there.

They welcomed the planned opening of a Maronite seminary in Sydney in 2021. The seminary will serve Maronite Catholic vocations in Oceania.