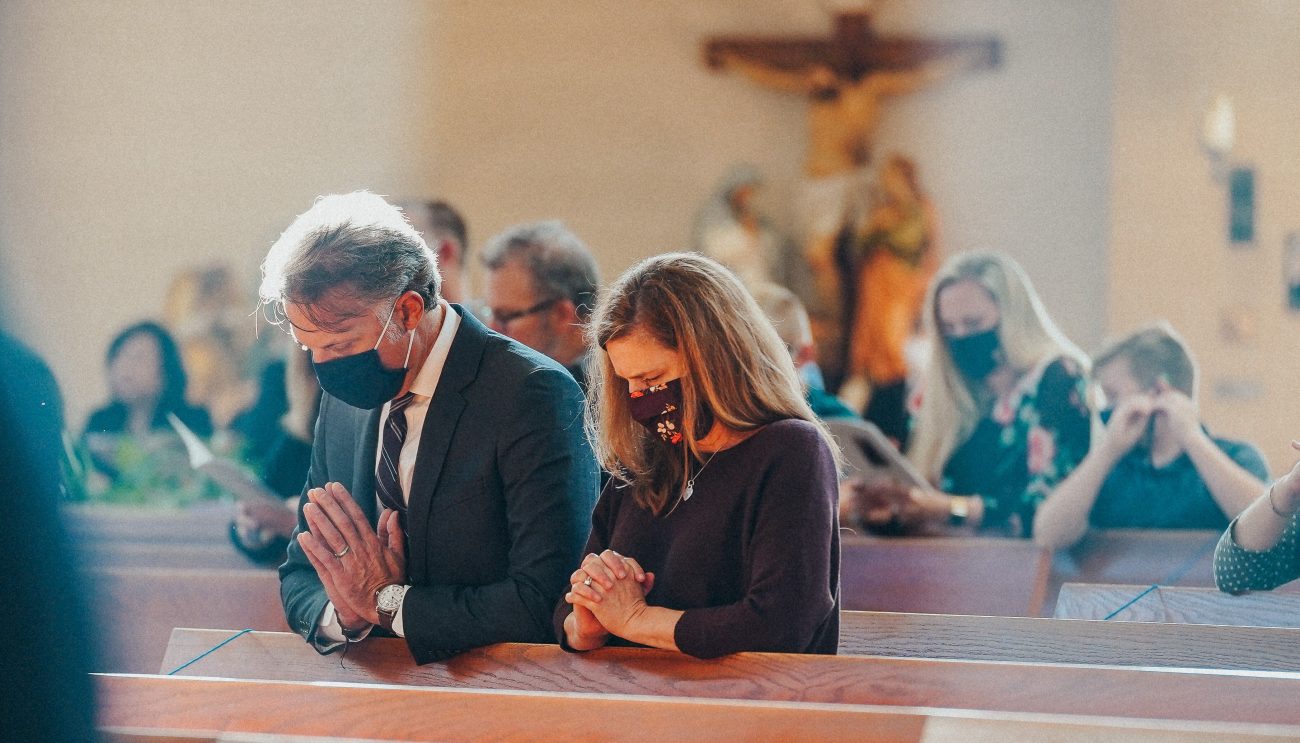 People pray at Our Lady of Good Counsel Parish in Plymouth, Mich., Nov. 24, 2020. Under the new "family of parishes structure, each individual parish in the Archdiocese of Detroit would retain its identity, but would work more closely with neighboring parishes. (CNS photo/Valaurian Waller, Detroit Catholic)

DETROIT (CNS) — Heroic trust in the Holy Spirit and a firm resolve to move forward “on mission” are at the heart of the Archdiocese of Detroit’s transition to “families of parishes,” Archbishop Allen H. Vigneron said Nov. 22 in a new pastoral note.

Released on the feast of Christ the King and the fourth anniversary of the archdiocese’s Synod ’16, the note, titled “Led by the Spirit on Mission,” is the culmination of months of discernment since Archbishop Vigneron announced May 31, the feast of Pentecost, that the archdiocese will transition to a new pastoral and governance model for its 218 parishes.

The plan calls for “families of parishes” whereby each of the archdiocese’s parishes will join a new family, but “each parish in a family will retain its own unique identity, similar to how each sibling has his or her own unique role in the family,” the archbishop said.

The final list of parish families, which is expected to be released Dec. 9, was compiled after months of discernment and input from priests, bishops and lay leaders, the archbishop said. The transition will be made in two waves, with roughly half of parishes transitioning beginning July 1, 2021, and the second half starting in July 2022.

“This is a pivotal time for our diocese as we plan for the future of the Church of Pittsburgh,” Bishop Zubik said. “Southwestern Pennsylvania is radically different than it was 100, 50, 20, even 10 years ago, yet the work of the church and our call from God to bring his love to everyone continues as strong as ever.”

The mergers are part of Pittsburgh Diocese’s ongoing “On Mission for The Church Alive!” strategic planning initiative, which is designed to help parishes mobilize their resources “to prioritize mission over maintenance.”

Bishop Zubik invited the faithful, with their “faith in Jesus and empowered by the Holy Spirit,” to “warmly welcome and serve each other as you become one parish family.”

In Detroit, the overall vision for the parishes is modeled after structures successfully implemented in other dioceses, including London, Ontario, and the Archdiocese of Boston, in which parishes “collaborate by sharing resources — including priests, deacons, and staffs across parish lines — to further advance the mission Christ has entrusted to his church.”

In his Nov. 22 homily from the Cathedral of the Most Blessed Sacrament, the archbishop said the feast of Christ the King was a “fitting day” to release the note, given what Christ teaches about the need to strive together toward the kingdom.

In the pastoral note, Archbishop Vigneron identifies the key reasons for the archdiocese’s transition — including a well-publicized priest shortage — but emphasized its continuity with the vision of the archdiocese’s Synod ’16.

“When ‘Unleash the Gospel’ (the archbishop’s post-synodal pastoral letter) was published on Pentecost 2017, I committed our local church to follow wherever the Holy Spirit would lead us in the coming years,” the archbishop said.

“There have been many moments for putting into action the work of the synod, and now we reach an especially critical time for the implementation of the synod’s work,” he said. “Our new model of Families of Parishes, announced at Pentecost of this year, is a continuation for the fruits of Synod ’16 and Unleash the Gospel.”

Just as the synod called for parishes to be “Spirit-led and radically mission-oriented,” so families of parishes must also be aligned and equipped for evangelization.

“The structures we inherited for our parishes served us well in the past, but we know from Synod ’16 … that parishes need to be realigned for mission,” the archbishop said, adding discernment also was shaped by the Vatican’s recent document on parish planning, “The Pastoral Conversion of the Parish Community in the Service of the Evangelizing Mission of the Church.”

Drawing on the themes of Unleash the Gospel, Archbishop Vigneron enjoined the faithful to embrace habits that foster a greater trust and abandonment to Jesus, who commanded his apostles to “go forth and make disciples of all nations” (Mt 28:16-20).

“This is not some off-hand passing remark of our Lord,” the archbishop said. “This is his charter for the first generation of disciples and their successors. It is the charter for the Church in Detroit — and for you and me.”

Although the pandemic, racial unrest and a contentious election have disrupted normal ways of ministry, “we are reminded that all people have a right to hear the Gospel proclaimed,” the archbishop said.

“A task of this magnitude is not accomplished by anyone working alone. We need a new spirit of cooperation and a commitment to working together,” he said. “This must be coupled with a spirit of innovation. Having a missionary mindset requires a willingness to try new things, even to fail at times, in an effort to advance the Gospel.”

In his announcement at Pentecost, Archbishop Vigneron called the move to families of parishes a “very important step in the life and mission of our local church” that will allow parishes to more robustly serve their mission while proactively responding to historic challenges that have been exacerbated by the COVID-19 pandemic.

Different from the traditional model of merged parishes, each parish in a “family” will retain its own canonical identity, but share a leadership team that may include priests, deacons, pastoral ministers and other parish staff.

Collaboration among parishes isn’t new. Rather, it’s been a fact of life for several decades — a fact that should be celebrated and built upon, Archbishop Vigneron said.

Among the chief reasons for the switch to families of parishes is the need to renew the priesthood, which has become stretched thin by a seemingly endless list of administrative tasks as the number of priests overall continues to shrink.

The archdiocese has a new website, familiesofparishes.org, where the faithful can learn more about the plans. At their core, parish families will be groups of parishes — generally three to six — that share human and material resources in a spirit of collaboration.

In Pittsburgh, each of the mergers was requested by the priest-administrator of the grouping, after extensive consultation with parishioners. Bishop Zubik consulted with and received consent from the diocesan priest council and vicars general before approving each request.

“For two years, you have journeyed together on a road that is intended to unite you on the mission to bring the good news of Jesus to your neighbors and to strengthen all of you in faith,” Bishop Zubik said.

“This has not been a simple task,” he said. “Jesus never promised that it would be easy to carry his message of love and mercy to others. He was clear that sacrifice would be necessary. However, you are positioning your new parish for more effective ministry by addressing financial needs, sharing resources and allowing your clergy to focus on the spiritual work for which they were ordained.”

Stechschulte is editor-in-chief of Detroit Catholic, the online news outlet of the Archdiocese of Detroit.

NEXT: Panel: Dorothy Day’s focus on the neglected would resonate in COVID-19 era