Kansas man thanks every doctor, nurse, therapist who helped him beat COVID-19 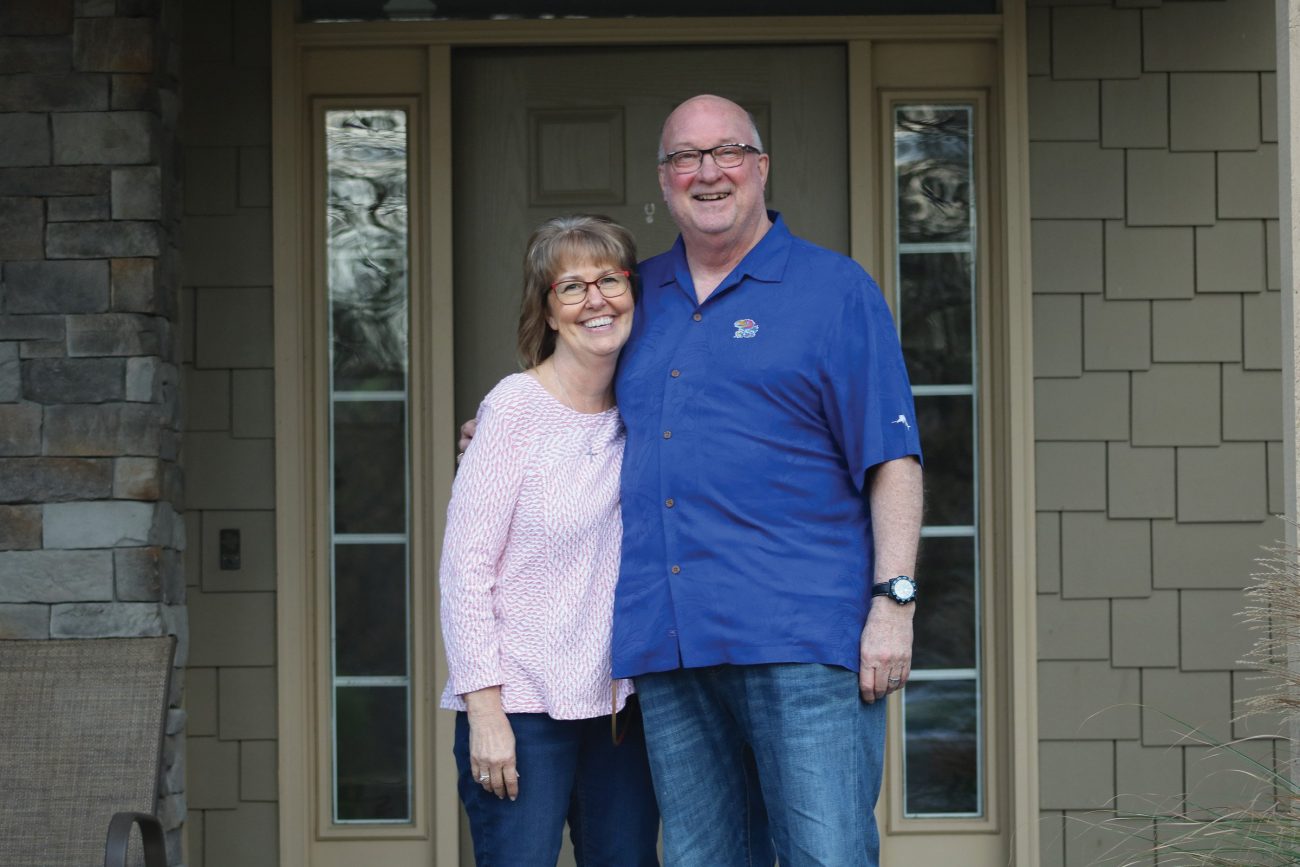 Kathy and John Rathbun are seen in this Nov. 13, 2020, photo. Members of Corpus Christi Parish in Lawrence, Kan., they were both diagnosed with COVID-19, and from July 8 to Aug. 9, John was a patient at Lawrence Memorial Hospital. (CNS photo/Marc Anderson, The Leaven)

At least that’s how John Rathbun, a member of Corpus Christi Parish in Lawrence, reflects upon his recent medical ordeal, which started in late June.

After attending his grandson’s first Communion, John lay down for a nap. Several hours later, he was still in bed.

When his wife, Kathy, called their son’s house, she learned he, too, was in bed.

Within a few days, John, Kathy and their son all tested positive for COVID-19, but John’s condition deteriorated rapidly.

“I was really tired at first, and then the cough set in, and then my oxygen started to drop,” John told The Leaven, newspaper of the Archdiocese of Kansas. “I actually went to the hospital. I went to the emergency room, and they treated me, and my oxygen went back up, and they sent me home.”

Three days later, though, John’s oxygenation levels fell below 70%. Kathy drove him to Lawrence Memorial Hospital. John was whisked away in a wheelchair. Staff said they’d call her when they had more news.

Later, John learned someone had called Kathy and told her he’d require a ventilator.

Four hours after John arrived at the hospital, pulmonologist Dr. Mitchell Tener told him he’d probably be there a while but would not require a ventilator. Tener’s assessment later proved accurate. Thirty-five days later, John returned home.

Both John and Kathy credit John’s recovery to two major factors — prayer and the excellent medical care he received. If there’s one message he’d like to spread this holiday season, it’s one of gratitude.

And he means that.

In fact, John kept track of every single person he interacted with during his July 8 to Aug. 9 hospital stay.

John’s list of nurses includes 66 names. Then, there’s the three pulmonologists as well as physical and occupational therapists: Over 70 individuals tended to him.

“They didn’t just keep track of my blood pressure and take my temperature. It was all the little, small kindnesses they did,” he said. “I can look at the list and tell you something about each one of them and something they did for me.”

For example, Tiffany heard him coughing uncontrollably one night.

“I couldn’t stop,” he recalled. “She came in my room, and it was about 10 o’clock at night. She said, ‘John, I can’t give you any more cough medicine. I can’t give you any more pills for the cough. You’ve had enough. You’re at your limit. I have these little candies, and I’m two months pregnant. I use the candies to fight through morning sickness. Maybe they’ll help you.”

Tiffany left the room, leaving him a few candies.

“I put one in my mouth, and something happened. It soothed my throat,” he said.

The next morning, Tiffany noted that John hadn’t coughed much after that.

“She handed me the tin of candies, and said, ‘I can get some more later. You keep these.'”

Then there was LaShon.

One day, she instructed him to put his feet up in a recliner and hand her his cellphone, saying she’d return in an hour.

“She came back in an hour, gave me my phone, and then she pulls out this lotion. She pulls the socks off my feet, and she begins to rub my feet with this lotion. … It made me feel relaxed — and what a kind thing to do!” he said.

The acts of kindness, John said, kept piling up. And while he said thank you often, a suggestion of his former pastor Father Mick Mulvany prompted him to do more.

He said Father Mick told him: “You should let people know how great your experience was and how wonderful the people treated you. They’d like to know that.”

So John wrote a letter to the hospital Oct. 6, thanking the staff for the excellent care he received during his lengthy hospital stay, enclosing the list of every doctor, nurse and therapist who treated him.

It should come as no surprise that one of John’s favorite Scripture passages is about the leper who returned to Jesus and thanked the Lord for his healing.

Now, even though he’s been interviewed at least three times by different media outlets, John continues to direct the discussion to praise of his medical team.

“I don’t want it to be about me,” he said. “I say this all the time — just jokingly — that I’m the numbskull that got sick and landed on their doorstep and lived to tell about it.

The Andersons write for The Leaven, newspaper of the Archdiocese of Kansas.