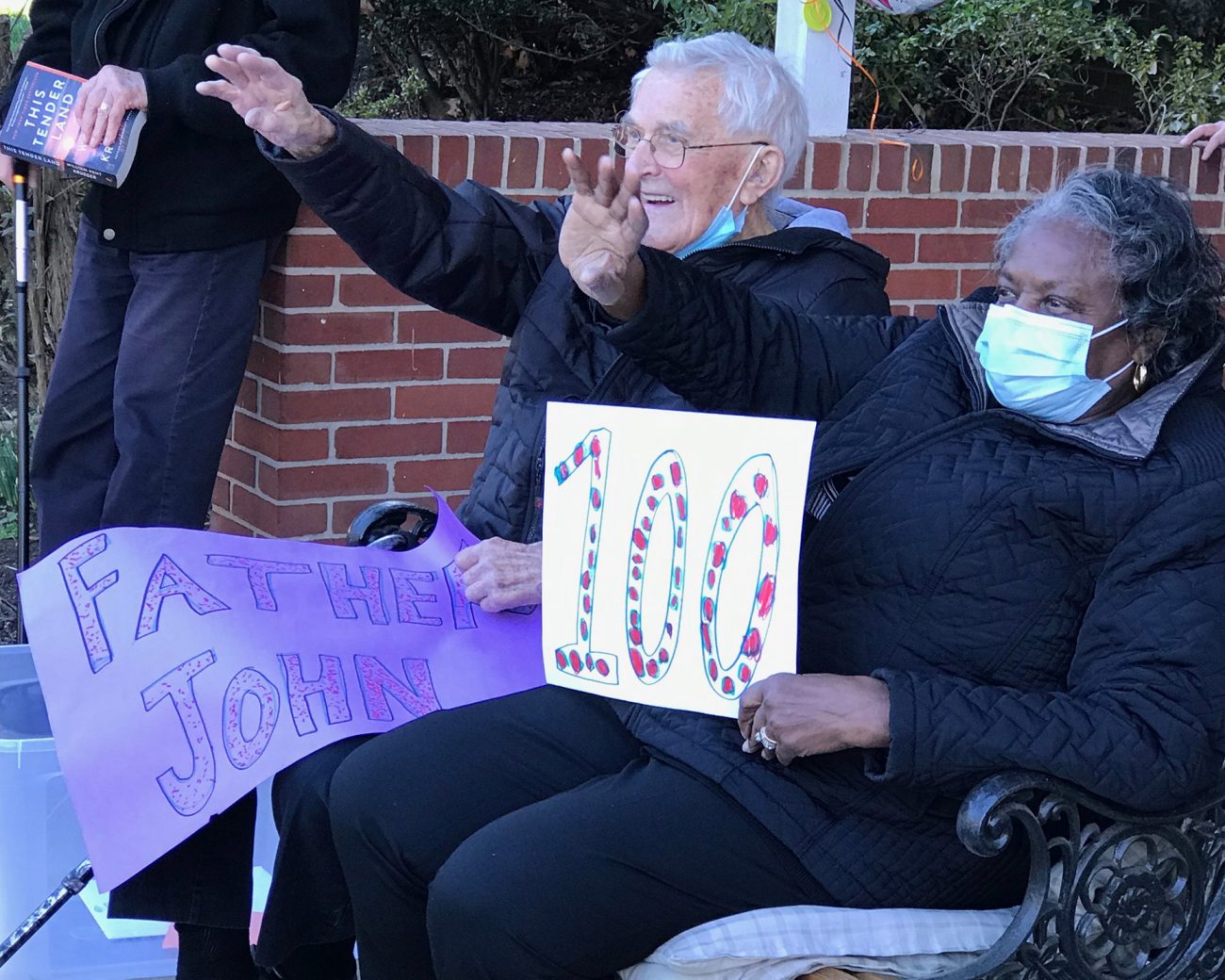 Father John Van de Paer sits with Doris Gubter-Rucker outside the Missionhurst provincial house in Arlington, Va., Nov. 29, 2020, as a parade of 50 cars drives past him to mark his 100th birthday. Gubter-Rucker is a member of St. Charles Parish in Philadelphia and has known the priest since she was 14. (CNS photo/Ann M. Augherton, Catholic Herald)

ARLINGTON, Va. (CNS) — Sitting on a bench outside the Missionhurst provincial house in Arlington, Father John Van de Paer waved to car after car driving past to wish him a happy 100th birthday Nov. 29.

Over 50 cars decked out with streamers, signs and balloons were led by an Arlington County Police cruiser with another police SUV ending the parade with obligatory lights and sirens.

“There are so many cars,” he said. “You certainly have to be 100 to expect anything like this. I’ve never seen so many people being so nice to me for this 100th birthday.”

Father Van de Paer said birthdays never meant much to him; it was not a custom in his family.

“I never thought I would live this long and maybe, maybe it’s because of the people,” he said with a big smile and blue eyes sparkling. “I lived that long because I liked the people so much that I want to be with them all the time and now they all come to me,” he told the Arlington Catholic Herald, newspaper of the Diocese of Arlington.

And come they did, some from Pennsylvania, some from Ohio and many more from the community the Missionhurst priests — the Congregation of the Immaculate Heart of Mary — have built in North Arlington.

Father Van de Paer was born in Antwerp, Belgium, Nov. 29, 1920. He entered the novitiate Sept. 8, 1940, and was ordained in 1947. The bulk of his priestly service, 43 years, was working with the African American community in South Philadelphia at St. Charles Borromeo Church. 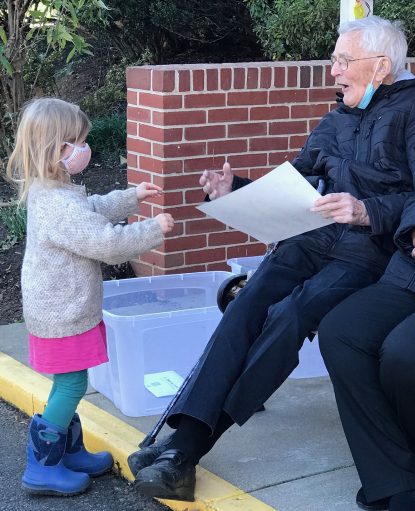 “I’ve known Father since I was 14 years old,” said Doris Gunter-Rucker, a parishioner from St. Charles who drove down for his birthday parade and sat next to the priest for the festivities.

Four-year-old Indigo Sanders and her parents came from just up the street. She presented Father Van de Paer with signs to wish him a happy birthday. Indigo often sees the centenarian during her morning walks when she stops to chat with him.

“We teach the people to give one another all their needs, so they can grow their children to be really part of the community, whichever that community may be,” Father Van de Paer said. “This is a beautiful place to call a community.

“That is really what you call a missionary.”

Augherton is acting editor and general manager of the Arlington Catholic Herald, newspaper of the Diocese of Arlington.