Virus halts Guadalupe processions, but not other ways to safely celebrate feast 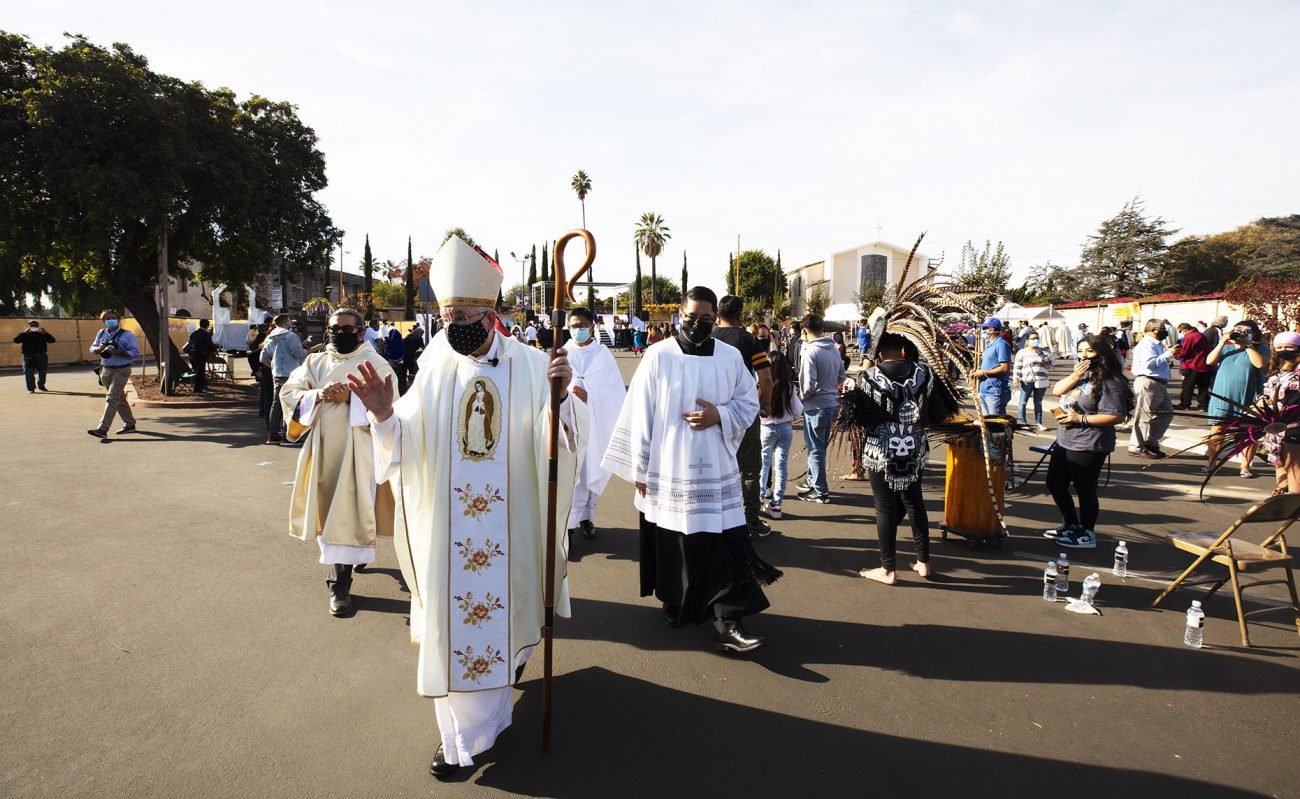 HOUSTON (CNS) — In what would have been its 48th anniversary, the huge procession of drummers and dancers swirling through downtown Houston in honor of the Dec. 12 feast day of Our Lady of Guadalupe has been canceled because of the pandemic, organizers said.

But individual churches will continue their local celebrations with matachines, who are parishioners performing dances dressed in indigenous costumes, said Priscella Marquez, president of the Asociacion Guadalupana.

Rosaries and early morning Masses practicing social distancing and mask-wearing will begin the celebrations. Afterward, participants can feast on tamales and other food, she told the Texas Catholic Herald, newspaper of the Archdiocese of Galveston-Houston.

Marquez, a parishioner at Immaculate Conception Catholic Church in Harrisburg, said: “We will be performing and singing from 5 a.m. to 6 a.m. Then Mass at 6 a.m. and afterward food booths will be available to purchase to go.”

As many churches do, the statue of Our Lady of Guadalupe will be decorated and dozens of flowers, mostly roses, will be given out of respect and love, she said.

The event is expected to last throughout the day so people can visit as their schedules allow.

One event that was not canceled was the Guadalupe Torch Relay, which began in Mexico City, carrying an official image of Our Lady of Guadalupe starting from its official shrine all the way to New York. It is accompanied by a lit torch carried the whole way by runners similar to the Olympic torch.

Following COVID-19 protocols, parishioners remained in their cars during a 7 p.m. outdoor Mass that evening and afterward were able to drive by the image and receive a holy card touched to the picture, Father Bueche said.

When informing his parishioners, he said, “Our Blessed Mother is making a special visit once again! Please make plans to come and greet her. Bring your needs and petitions. Bring your thanks and gratitude. Bring your love and devotion!”

Holy Ghost has one of the largest group of local folk dancers of all ages, some wearing elaborate feathered headpieces and traditional Aztec-style dress. They stomp to drumbeats and blowing conch shells.

After the downtown procession would arrive at the George R. Brown Convention Center each year, they would gather for a noon Mass celebrated at noon with Cardinal Daniel N. DiNardo of Galveston-Houston and other priests.

A similarly robust celebration of Our Lady of Guadalupe’s feast day — with a procession that normally draws 40,000 people — also has been canceled in the Archdiocese of Los Angeles.

But the faithful throughout the archdiocese continue to participate in nine days of virtual prayer and reflection leading up to Dec. 12.

On Dec. 6, they united in prayer and hope for a virtual procession and Mass in honor of Our Lady of Guadalupe and St. Juan Diego. It was livestreamed via the archdiocese’s Facebook page so families could honor “La Morenita” safely from home amid increased COVID-19-related public safety measures.

“Today, we ask Our Lady of Guadalupe for those who are sick, for the dying, for the ones that have lost their life and their families, for all those whose lives have been hurt and disrupted,” said Los Angeles Archbishop José H. Gomez during his bilingual homily. “We ask especially ask her intercession to bring us deliverance from this plague of the coronavirus.”

The celebration, themed “Our Lady of Guadalupe: Mother of Healing and Hope,” is the oldest religious procession in Los Angeles. It was established in 1931 by Mexican Catholics who fled persecution by the Mexican government during the Cristero War. The theme reflects on the importance of the presence of Mary in our lives, especially during these challenging times.

“In this Advent, Mary, Our Lady of Guadalupe, is still praying for us, still bringing her Son to us. So let Jesus come again — into our hearts, into our world,” the archbishop said in his homily. “Let him enter into your lives. Share your burdens and joys with him. Feel his love, listen for his voice.”

The celebration began with a mile-long car procession by members of the Guadalupano groups representing more than 30 parishes that participate annually in the procession and Mass. The cars were decorated by individual households with flowers, images and messages honoring Our Lady of Guadalupe and St. Juan Diego commemorating their feast days.

The procession of cars began at Vincent Lugo Park in San Gabriel and ended at Mission San Gabriel. A special outdoor Mass was celebrated by Archbishop Gomez in the mission’s parking lot to accommodate for social distancing.

Concelebrants for the Mass included Los Angeles Auxiliary Bishops David G. O’Connell and Alex D. Aclan; Father Juan Ochoa, administrator at Christ the King Parish in Los Angeles and president of the Commission for Our Lady of Guadalupe: Father Chris Bazyouros, pastor at St. Marcellinus Parish which houses the pilgrimage images throughout the year; and Father John Molyneux, pastor at Mission San Gabriel.

All this tradition honors the time starting Dec. 9, 1531, on a hill near a rural village just outside Mexico City, when Mary as Our Lady of Guadalupe appeared to a humble peasant on his way to Mass to celebrate the feast of the Immaculate Conception of Mary.

His native name in Nahuatl was Cuauhtlatoazin (“one who speaks like an eagle”) and in Spanish was named Juan Diego, now a saint canonized by St. Pope John Paul II in 2002.

Surrounded by light and speaking in his indigenous tongue of Nahuatl, Mary told Juan Diego that she wanted a church built to manifest the love of Jesus and hear the petitions of the faithful. At her request, he approached Bishop Juan de Zumarraga, who doubted the story.

After Juan Diego saw Mary again Dec. 12, she arranged roses within his cloak and told him this would be the sign that he should present to the bishop. When Juan Diego opened the cloak, or tilma, to show the flowers, the bishop was presented with a miraculous imprinted image of Our Lady of Guadalupe. The name Guadalupe is a Spanish version of the Nahuatl word Coatlaxopeuh, meaning “the one who crushes the serpent.”

The Basilica of Guadalupe in Mexico City, which displays St. Juan Diego’s cloak, has become one of the world’s most-visited Catholic sites, second only to the Vatican and Sistine Chapel in Rome.

Zuñiga writes for the Texas Catholic Herald, newspaper of the Archdiocese of Galveston-Houston.

NEXT: Jupiter, Saturn to put on ‘Christmas Star’ show at winter solstice