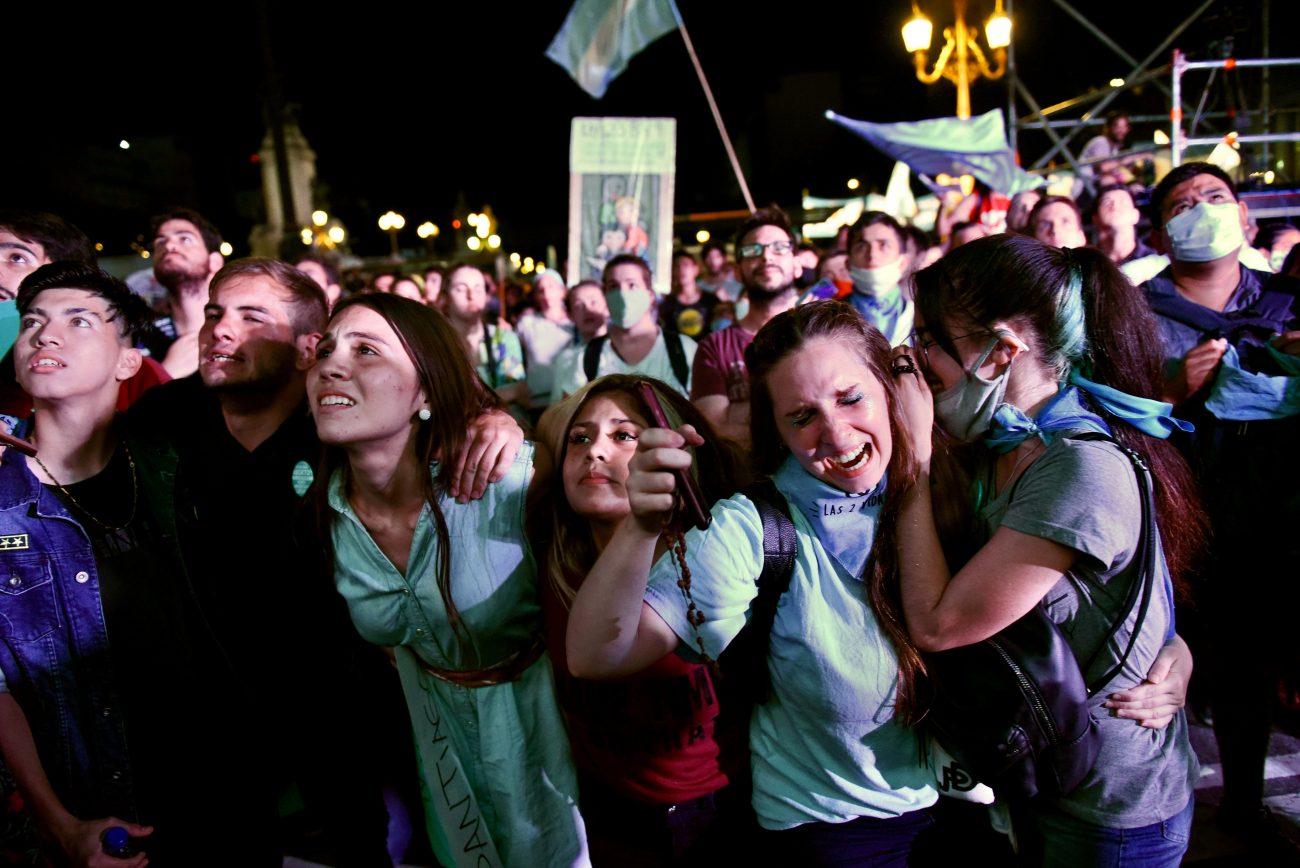 Pro-life demonstrators react after the Senate passed an abortion bill in Buenos Aires, Argentina, Dec. 30, 2020. Abortion will be legal during the first 14 weeks of pregnancy. (CNS photo/Martin Villar, Reuters)

MEXICO CITY (CNS) — Argentina has legalized abortion during the first 14 weeks of pregnancy, despite strong Catholic opposition and polls showing deep divisions on the issue.

The Senate approved the bill 38-29 Dec. 30 after a 12-hour debate as supporters with green handkerchiefs and opponents with blue handkerchiefs awaited the decision in the streets during the small hours of the morning. President Alberto Fernández presented legislation in November — it was quickly approved in the lower house — and has promised to sign it into law.

The bishops’ conference expressed disappointment with the legislation’s approval, but said in a Dec. 30 statement it “will continue working with firmness and passion in the care and service of life.”

“This law which has been passed will further deepen divisions in our country,” the bishops said. “We deeply regret the remoteness of our leaders from the feelings of the people, which have been expressed in various ways, in favor of life, throughout our country.”

The bishops also pledged to “continue working on the authentic priorities requiring urgent attention in our country: children living in poverty in increasingly alarming numbers, a number of (those children) dropping out of school (and) the urgent pandemic of hunger and unemployment, which affects many families.”

The legislation, which makes abortion legal during the first 14 weeks of pregnancy and provides access free of charge through the public health system, was modified slightly to allow for conscientious objection and requiring patients under the age of 16 to have the permission of at least one parent or guardian.

Mexico City and the Mexican state of Oaxaca have legalized abortion during the first 12 weeks of pregnancy. Some countries in Central and South America still outlaw abortion in all circumstances, though social movements calling for legalization — such as the feminist movement in Argentina — are becoming increasingly vocal.

A November poll by the firm Giacobbe and Associates showed 60% of respondents opposed legalizing abortion, with 27% in favor. Polls published in 2018, when the Senate narrowly voted against abortion legalization, showed a closer division.

“People are thinking of their own personal situations,” said Father Miguel Ángel Moreyra, a priest at the St. Cajetan shrine in Buenos Aires, where people pray to the patron saint of bread and work. He attributed the decline in support for the legislation to messy politics, along with “the economy and handling of the pandemic.”

The bishops lobbied hard against the bill and demonstrated displeasure with Fernández by forgoing a traditional pre-Christmas meeting with the president and publishing an unflattering assessment of Argentina’s deteriorating social situation.

Priests working in the shanties of Buenos Aires — who met with Fernandez earlier in 2020 and pledged to assist with pandemic relief — also expressed displeasure, pointing to public health problems that are going unresolved.

“It causes a certain outrage because we’re working so people have something to eat and they come up with a proposal that has nothing to do with this, at least at this time,” Father José di Paola told Radio Mitre.

The bishops called for a day of prayer and fasting prior to the vote in the Senate. Priests also dedicated Masses celebrated Dec. 28 for the feast of Holy Innocents to the pro-life issue.

“For those who are hoping to start a better year, this legislative agenda doesn’t bring hope,” Cardinal Mario Poli of Buenos Aires said in his homily. “There are so many health and social questions to resolve, which require our attention.”

PREVIOUS: With tears of joy, exiled archbishop returns to Belarus for Christmas