Away with the manger? Vatican’s Nativity scene spurs controversy 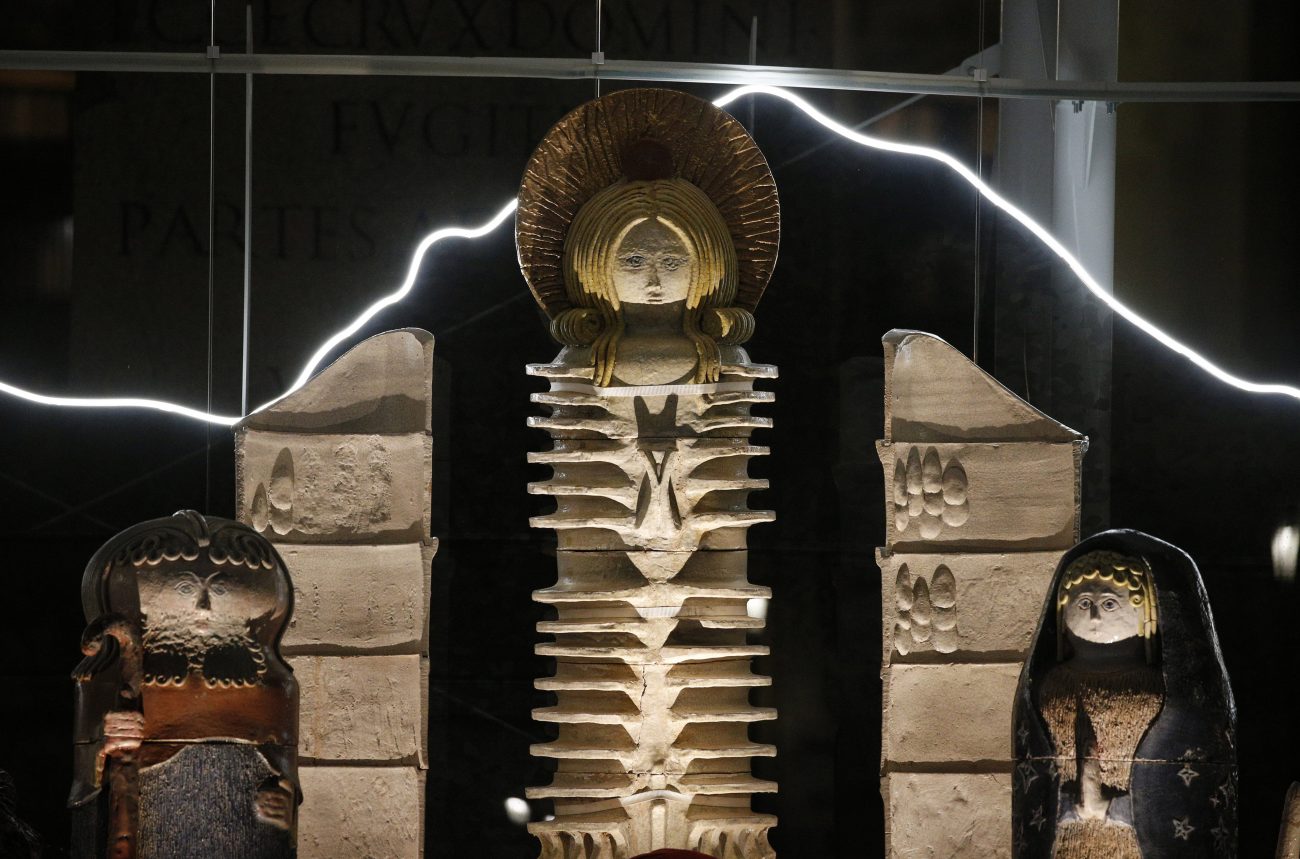 Figures of Joseph, an angel and Mary are pictured in the Nativity scene in St. Peter's Square at the Vatican Dec. 14, 2020. (CNS photo/Paul Haring)

VATICAN CITY (CNS) — Especially in a year when the COVID-19 pandemic will rule out many people’s favorite Christmas traditions, they have a right to express their dislike of the decidedly untraditional Nativity scene on display in the center of St. Peter’s Square, said a priest who specializes in catechesis through art.

But it may be more edifying to try to understand it, said Msgr. Timothy Verdon, director of the office of sacred art for the Archdiocese of Florence, Italy, and director of the Florence cathedral’s museum.

First, he said, people need to recognize that dioceses ask the Vatican to feature their Nativity scenes, and the Vatican City governor’s office makes a choice from those offers many months in advance.

“Pope Francis goes out of his way to surprise people, to get them to think, to go to a deeper, more mature understanding of their faith,” Msgr. Verdon told Catholic News Service Dec. 15. So, given the pope’s willingness to embrace a challenge, when the governor’s office chose the ceramic Nativity scene from the town of Castelli, it made sense.

The controversial scene was made by students at a high school specializing in art; the pieces on display at the Vatican are among the 54 pieces students created over a 10-year period beginning in 1965. The town of Castelli, in the mountains of Italy’s Abruzzo region, had a world famous, thriving ceramics industry since the 17th century, but the art — and the town — was dying out. The school was part of an effort to revive the industry and modernize it.

The human figures in the Nativity scene are made of rings of ceramic stacked on top of each other. They are cylindrical, not curvy like a natural human form. And the presence of an astronaut and a knight carries the whole thing to another level of untraditional. 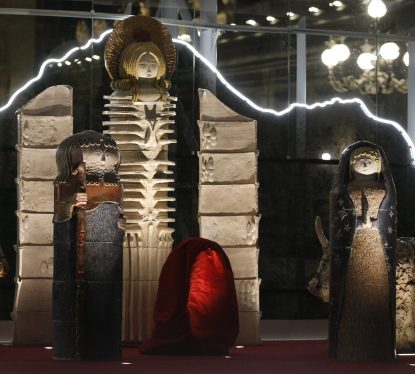 The Nativity scene is pictured in St. Peter’s Square at the Vatican Dec. 14, 2020. (CNS photo/Paul Haring)

“This is not the sweet, warm nostalgia that Christmas usually generates,” Msgr. Verdon said. “But even in this intimate area of our religious lives, we have to grow in unexpected ways.”

As for adding the astronaut, the monsignor said that definitely is part of tradition. “In Naples, they add political figures, pop stars and, this year, (Diego) Maradona,” the soccer star who died in late November. “Not only shepherds and kings go to the manger, but all humanity makes that pilgrimage in one way or another.”

“But maybe especially this year when the celebration of Christmas is going to be so poor in tradition, when many people will be unable to do the beautiful, warm, tender things” they are used to associating with Christmas, they might not need such a challenging Nativity scene, he said.

And, at least judging from the social media reaction, they did not welcome it.

The vehemence of the reaction may be attributable to “a widespread idea that a lot is going on in the world that is not being explained to us — a maniacal universal plot to deprive humanity of values and traditions,” Msgr. Verdon said. And even if one does not buy into such a conspiracy theory, “everyone is at the limit of his or her patience, so something like the creche in St. Peter’s Square becomes bigger than it should be.” 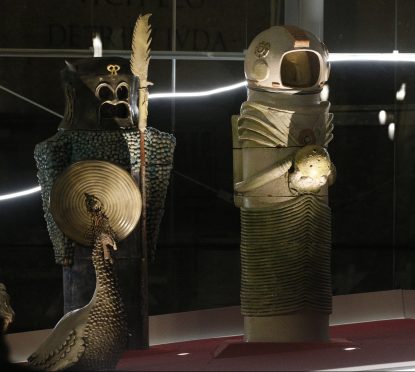 An astronaut (right) is seen among other figures in the Nativity scene in St. Peter’s Square at the Vatican Dec. 14, 2020. (CNS photo/Paul Haring)

Angelo Bottone, a native of Abruzzo teaching in Dublin, was one of the few people on Twitter defending the manger.

“There is a sentimental element because it comes from my region,” he told CNS. For example, the scene has a curved neon light behind it. “For a foreigner, that may mean nothing, but I immediately saw that that is the Gran Sasso mountain — it’s a symbol of Abruzzo — where Pope John Paul II used to go skiing.”

The colors used are the traditional colors of Castelli ceramics, he said. But “it’s also traditional in the sense that especially in the south of Italy, we always have contemporary elements in the ‘presepe,'” the Italian word for a creche.

“It’s been a very well-established tradition for centuries. The crib is not historically accurate at all; the Holy Family is surrounded by people of the time the creche was made because the sense is that Jesus is born now, in our world,” Bottone said. “So, when the teenagers from Castelli made it in 1965 and the years following, they included contemporary elements of their own day.”

Those elements included an astronaut after the moon landing in July 1969. “What they did was portray an astronaut offering the moon to Jesus,” Bottone said. “To me, it’s an expression of profound worship.”

Many of the negative reactions are simply the result of not understanding the Nativity scene, Bottone said. Others thought “this was something that Pope Francis commissioned. And obviously, the whole anti-Francis brigade went berserk.”

“It’s important for people to know that this was made by teenagers in 1965; it was not made today by some mad artists,” he said. “If people don’t like it, that’s fine. It’s a piece of art, and we have different tastes.”

Whether St. Peter’s Square was the best place to exhibit the Nativity scene is another question, he said. “But I’m not seeing any effort to go beyond the first reaction and try to express a more charitable judgment.” 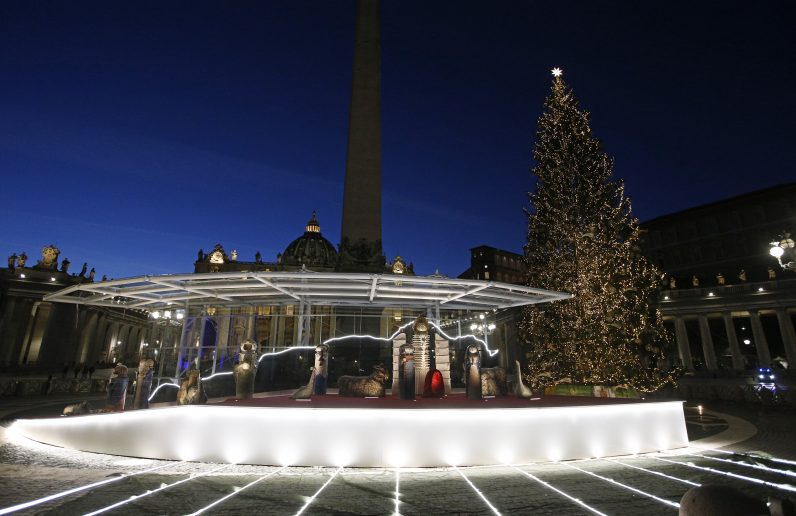 The Nativity scene and Christmas tree are pictured in St. Peter’s Square at the Vatican Dec. 14, 2020. (CNS photo/Paul Haring)