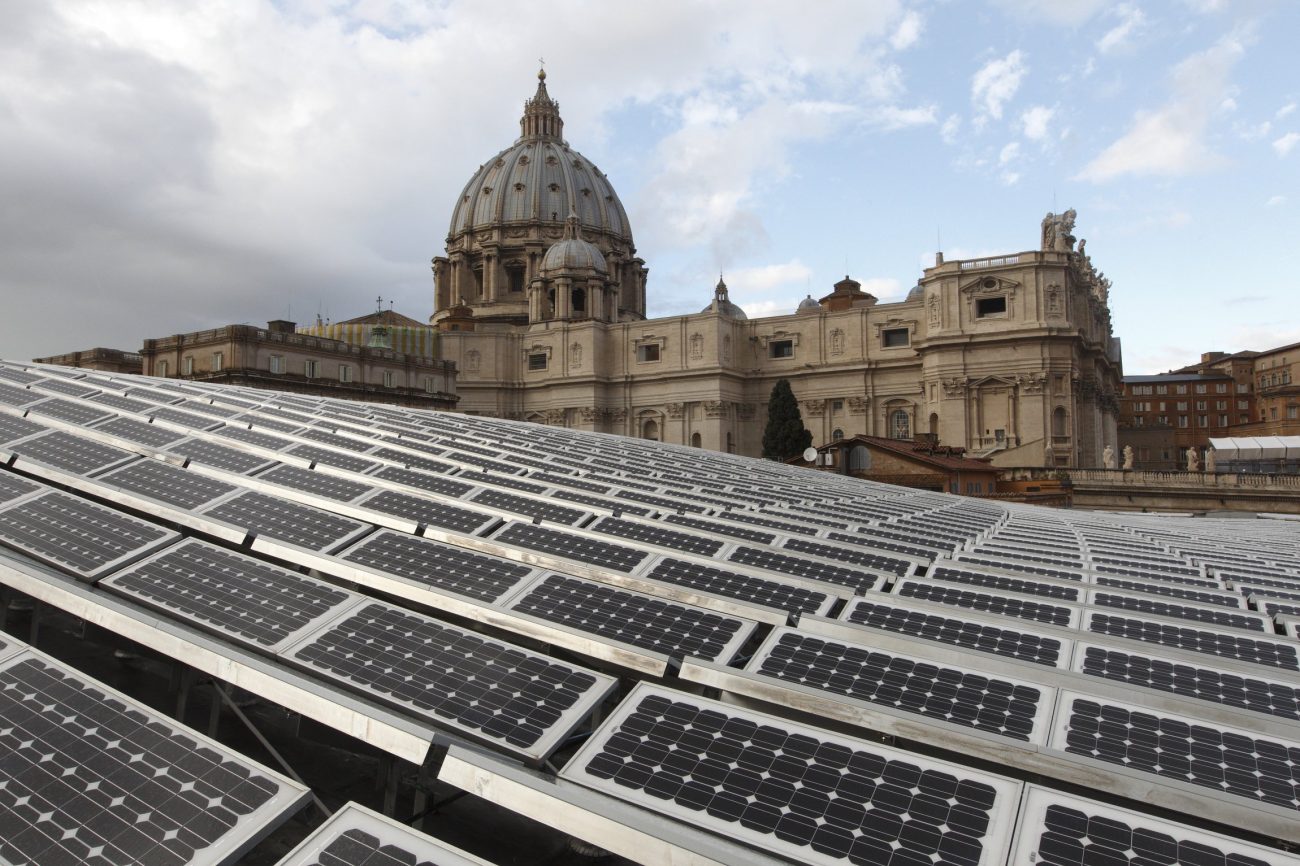 Solar panels are seen on the roof of the Paul VI audience hall at the Vatican in this Dec. 1, 2010, file photo. In a videomessage, Pope Francis told the Virtual Climate Ambition Summit that Vatican City is aiming for net zero carbon emissions. (CNS photo/Paul Haring)

VATICAN CITY (CNS) — Pope Francis pledged Vatican City State would achieve net-zero carbon emissions before the year 2050, and he urged everyone in the world to be part of a new culture of care for others and the planet.

“The time has come for a change in direction. Let us not rob the new generations of their hope in a better future,” he said in a video message for a global summit.

Pope Francis was one of about 75  leaders who contributed to the Climate Ambition Summit, which was held online Dec. 12. Co-hosted by the United Nations, the United Kingdom and France, and in partnership with Chile and Italy, the meeting marked the fifth anniversary of the Paris Agreement on climate change.

During the meeting, the leaders renewed or strengthened investment pledges and commitments to cut greenhouse gas emissions and achieve carbon neutrality.

In his message, Pope Francis said everyone has a responsibility “to promote, with a collective commitment and solidarity, a culture of care, which places human dignity and the common good at the center.”

That means there are some measures that can no longer be postponed, he said, including implementing strategies to reduce net emissions to zero.

The Holy See is committed to this objective, he said.

Vatican City State will work to reduce net emissions to zero by 2050, he said, and it will continue to strengthen and expand its efforts toward greater energy efficiency, improved resource management, sustainable transportation and waste management, and reforestation.

The Holy See also is committed to promoting a greater understanding of integral ecology, he said.

“Politics and technology must unite behind an educational process which favors a cultural model of development and sustainability focused on fraternity and an alliance between human beings and the environment,” he said.

In a written message for the summit, Cardinal Peter Turkson, prefect of the Vatican Dicastery for Promoting Integral Human Development, said more must be done to help the poor and the planet.

“God has entrusted us with this planet and its wonderful resources,” he wrote, appealing to world leaders to look at earth’s assets as a common good for all people and to focus much more on those who are the poorest and most vulnerable.

“We are one human family and we can only count on each other for taking care of our common home,” he added.

PREVIOUS: Away with the manger? Vatican’s Nativity scene spurs controversy

NEXT: In Nigeria, nun cares for abandoned children labeled as witches