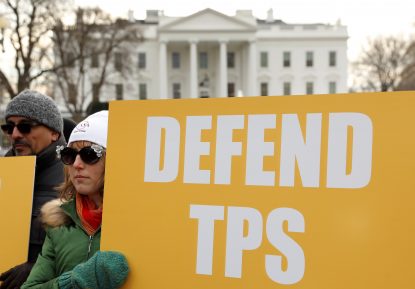 CHALATENANGO, El Salvador (CNS) — U.S. Citizenship and Immigration Services announced that seven countries will receive an extension for its citizens to remain in the U.S. under the Temporary Protected Status program, known popularly as TPS.

The Catholic Legal Immigration Network Inc., or CLINIC, has made recommendations to the incoming Biden administration about steps to take in January, and beyond, to help the 400,000 or so beneficiaries.

The TPS program grants a work permit and reprieve from deportation to certain people whose countries have experienced natural disasters, armed conflicts or exceptional situations so they can remain temporarily in the United States.

But many have U.S.-born children, steady or long-term jobs, and even businesses in the U.S.

CLINIC’S advocacy working group, a coalition of more than 100 organizations, had argued that TPS holders not be “returned to situations where their lives and freedom would be at risk and that families remain united and stable.”

The U.S. Conference of Catholic Bishops, through its Committee on Migration, along with Sean Callahan, president and CEO of Catholic Relief Services, issued a statement in September voicing concerns about what the end of TPS could mean following a decision from U.S. Court of Appeals for the 9th Circuit that had put the future of the program in question.

“The 9th Circuit’s decision continues a heartbreaking path of uncertainty and fear for hundreds of thousands of TPS recipients needlessly put into motion by the Trump administration,” the statement said.

“As detailed in our extensive work in Central America and the Caribbean, TPS countries such as El Salvador and Haiti cannot adequately handle the return of TPS recipients and their families,” it said.

“The spread of COVID-19 has only made conditions worse,” the statement added. “Today’s decision will fragment American families, leaving, for example, over 192,000 U.S. citizen children of Salvadoran TPS recipients without their parents and with uncertain futures.”

The incoming administration, in a detailed plan on immigration on Joe Biden’s campaign website, has said when when it takes office in January, it will “order an immediate review of Temporary Protected Status (TPS) for vulnerable populations who cannot find safety in their countries ripped apart by violence or disaster.”

TPS and Deferred Enforced Departure holders “who have been in the country for an extended period of time and built lives in the U.S. will also be offered a path to citizenship through legislative immigration reform,” the incoming administration has said on the website.