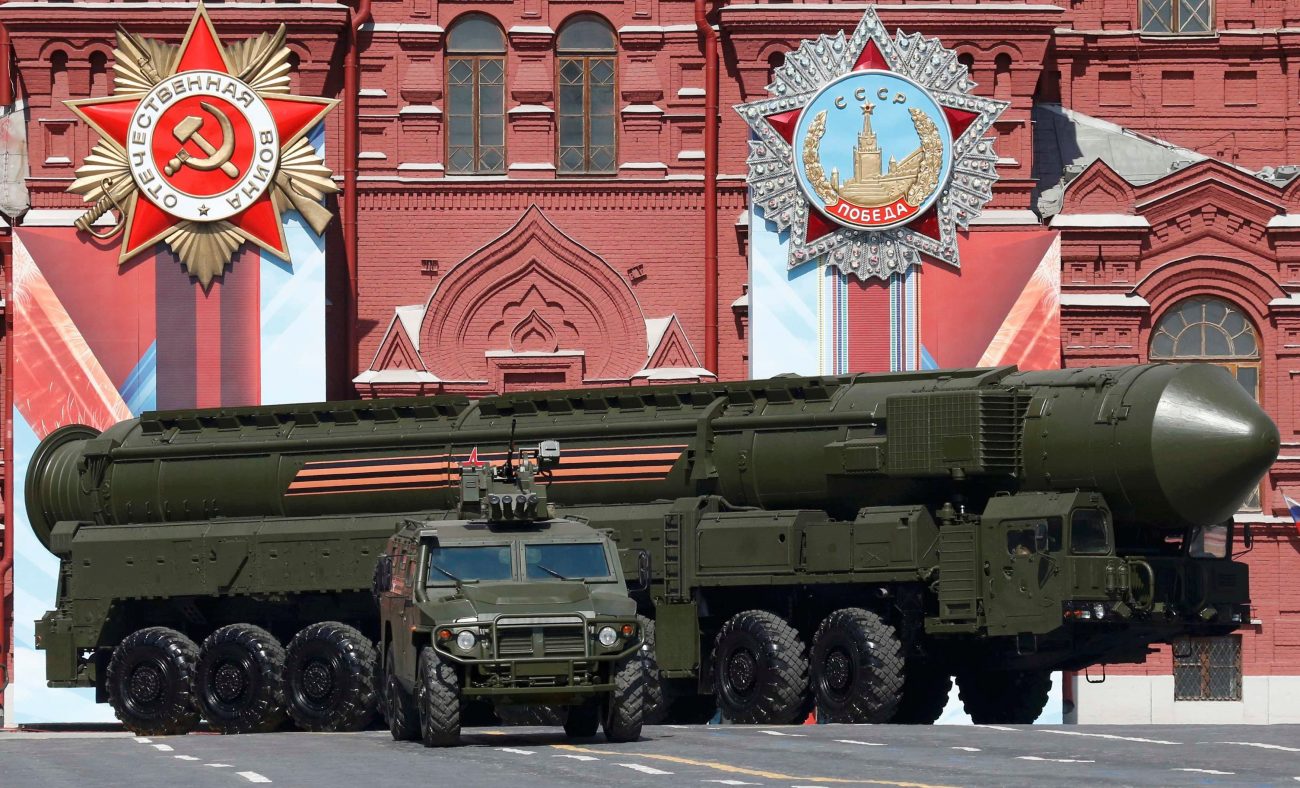 A Russian Yars RS-24 intercontinental ballistic missile system drives during the Victory Day parade marking the 71st anniversary of the victory over Nazi Germany in World War II, at Red Square in Moscow May 9, 2016. A nuclear-free world can only be achieved through a renewed sense of unity and solidarity among nations, Archbishop Paul Gallagher, Vatican foreign minister, said at a Dec. 16 webinar on nuclear disarmament. (CNS photo/Grigory Dukor, Reuters)

VATICAN CITY (CNS) — The goal of a nuclear-free world can only be achieved through a renewed sense of unity and solidarity among nations that breaks the dynamic of mistrust, said Archbishop Paul Gallagher, Vatican foreign minister.

Addressing a webinar Dec. 16 on nuclear disarmament, Archbishop Gallagher highlighted the Vatican’s support of political dialogue that goes “beyond the theory of fear” and of the need to “emphasize how nuclear deterrence represents a false sense of security and of stability.”

“The Holy See reaffirms its unwavering commitment in this direction as demonstrated by its ratification of all the main nuclear treaties and its continuous efforts to promote a concrete culture of peace based on the dignity of the human person and on the primacy of law, fostering responsible honest and consistent cooperation with all members of the family of nations,” he said. 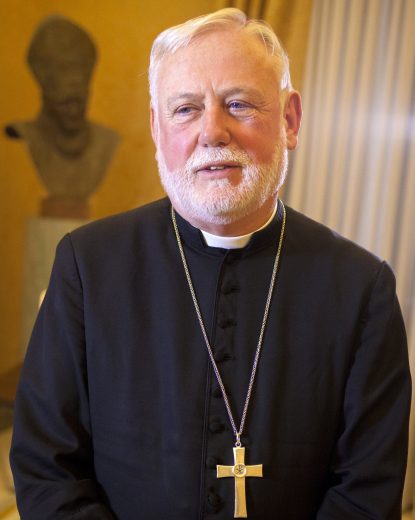 Archbishop Paul R. Gallagher, Vatican secretary for relations with states, is pictured during an interview in Rome in this Feb. 25, 2016, file photo. A nuclear-free world can only be achieved through a renewed sense of unity and solidarity among nations, Archbishop Gallagher said at a Dec. 16 webinar on nuclear disarmament. (CNS photo/Robert Duncan)

The webinar, titled “A world free from nuclear weapons,” was co-sponsored by the Dicastery for Promoting Integral Human Development, Georgetown University, Notre Dame University and the Catholic Peacebuilding Network.

The event coincided with the launch of a new book that features Pope Francis’ address in November 2017 in which he spoke out against nuclear weapons, as well as “testimony from Nobel Peace Prize laureates, religious leaders, diplomats, and civil society activists,” according to Georgetown University Press.

In a Dec. 14 statement, the dicastery said the goal of the event was to stress the link between peace, disarmament and health security during a time of pandemic.

In his talk, Archbishop Gallagher cited the pope’s video message to the U.N. General Assembly in late September. In his message, the pope said the current pandemic can lead to two paths: one that shifts toward a “renewed sense of global co-responsibility” or one of “self-sufficiency, nationalism, protectionism, individualism and isolation” that “excludes the poor, the vulnerable and those dwelling on the peripheries of life.”

The Vatican foreign minister said the pope’s perspective also applies to the issue of nuclear weapons as a means of deterrence.

He also expressed concern that “nuclear powers often seem to continue turning inward away from multilateralism,” such as the uncertainty regarding the renewal of the New START treaty, a bilateral agreement between the United States and the Russian Federation that seeks to reduce and limit the use of nuclear warheads, ballistic missiles and other strategic offensive arms.

However, he also cited the U.N. Treaty on the Prohibition of Nuclear Weapons, which bans the possession and use of nuclear weapons, as a step toward a “nuclear weapons-free world.”

To achieve a lasting peace, Archbishop Gallagher said the international community must look beyond nuclear deterrence.

“International peace and security cannot be founded on the threat of mutual destruction or total annihilation or maintaining a balance of power or regulating relations by substituting the rights of the power to power of right,” the archbishop said.

“Peace and security must be built on justice, integral human development, respect for fundamental human rights, the protection of creation, the building of trust among peoples, the promotion of educational and health structures, dialogue and solidarity,” he said.

NEXT: Pope again calls to divert funds from weapons to fighting hunger