Members of the Joint Catholic Ministry on Racial Justice, a partnership of St. Martin de Porres Parish in North Philadelphia and St. John Chrysostom Parish in Wallingford, Delaware County, meet via a Zoom conference in October 2020.

The year 2020 overwhelmed us with two pandemics — one new and one old. The new pandemic was the coronavirus. The old one was racism.

While COVID dominated the whole year, the racism pandemic – which has blazed and cooled in cycles throughout American history – exploded primarily over the summer and fall.

And the outrage wasn’t just societal. Much of it was specifically Catholic.

Calling George Floyd’s death tragic, Pope Francis said: “We cannot tolerate or turn a blind eye to racism and exclusion in any form and yet claim to defend the sacredness of every human life.”

The National Black Catholic Congress called for an investigation into Floyd’s death, as a Sister of the Precious Blood told one reporter: “You can only oppress people so long before things tend to erupt.”

In Philadelphia, Archbishop Nelson Pérez called Floyd’s death “tragic, disturbing, and unnecessary” and called on the faithful to work together for social justice.

These calls were not new: In 2018, the U.S. Conference of Catholic Bishops committed to “speak forcefully against and work toward ending racism” in their pastoral letter, Open Wide Our Hearts.

But this year’s violence brought new urgency to the issue.

Catholics, Black and White, coming together

Now, two archdiocesan parishes, one predominantly Black and one White, have united in a grassroots effort to answer the call to fight racism, including racism in the church. And they are urging other parishes and faith communities to do likewise.

The parishes share a connection in Father Edward Hallinan, current pastor of St. John’s and former pastor of St. Martin’s, which is now led by his friend, Father Steven Thorne.

The joint ministry was established in the wake of a Virtual Town Hall on Racism that the parishes co-hosted last June at Father Thorne’s suggestion. That event drew more than 125 households. While the conversation was meaningful, participants felt that real change demanded a sustained, structured effort.

The new ministry, then nameless, met a month later, comprised of five parishioners from each parish and both pastors. While the clergy participate, the ministry is lay-led, co-facilitated by parishioners James E. Andrews of St. Martin’s and Mary E. Chollet of St. John’s.

Meeting head on the sin of racism in the church

Ministry members contend that racism is not just a social issue, but one that also afflicts and infects faith communities, including the Catholic Church.

Nearly 60 years after the Rev. Dr. Martin Luther King Jr. called 11 a.m. Sunday “the most segregated hour in Christian America,” Catholic leaders still have not done enough to recognize and eradicate racism and tend its wounds, even among their own faithful, members say.

“Promoting understanding, healing and reconciliation on the subject has long been overlooked, ignored and not truly dealt with from the top down,” said member Douglas Stanford of St. Martin de Porres. Change must come “through God’s people in words and deeds.” 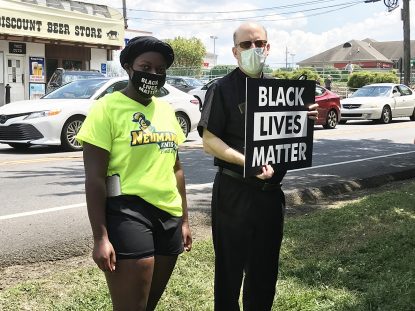 That split showed again this summer, when Father Hallinan attended a Black Lives Matter rally as part of the Interfaith Council of Southern Delaware County, then preached against racism that weekend. Some parishioners and visitors expressed concern and outrage at his actions and message.

The Joint Ministry held its first meeting by Zoom in late July. Those early conversations were not always easy, as might be expected when strangers try to tackle highly sensitive topics over finicky technology. But the ice broke as discussion turned to the need for a name and mission statement, both adopted in August.

The mission: “Grounded in our baptismal call to embrace life and dignity for all persons as equal and beloved members of the Body of Christ, and condemning the sin of racism as a “destructive and persistent form of evil” (USCCB, 2018), our ministry aims to foster opportunities for spiritual growth, fellowship, education, and dialogue to promote racial understanding, healing and justice within, among and beyond our parish communities.”

Monthly meetings begin with prayer and Scripture, then development and discussion of action items. While COVID has hampered the group’s ability and desire to meet in person and to plan joint parish events, members hope to visit both parishes with their pastor for Mass and a Q & A session in January.

They will also support the archdiocese’s Martin Luther King Day activities, which are being planned by member Andrews, who was appointed director of the archdiocesan Office for Black Catholics this fall.

Ministry members hope their efforts will inspire similar partnerships in other parishes and faith communities. Another local parish has already reached out to learn more, in the hope of attracting a partner parish.

Change will likely be slow, but members feel that their ministry has already borne fruit by bringing them together — a dozen Black and White Catholics who are committed to discussions likely to lead outside their comfort zones into the change they feel called to pursue.

“We are bound by our faith as well as our desire to make a positive difference in the world,” said member Monique Wright of St. Martin de Porres. “We seek to understand each other’s issues and culture.”

Member Joe McMahon of St. John’s agreed. “As Catholics, we are called to move past circumstances of division — for example, differences in wealth, ethnicity, and religion — to truly focus on loving our neighbors.”

Fellow parishioner Gerry Arango said she was “proud of our parishes for wanting to enter this conversation, and I’m happy to be a small part of this important opportunity to put our faith into action.”

“We hope to be an example of what can be done when we take the time to communicate and share our culture and the beauty of diversity,” Andrews said.