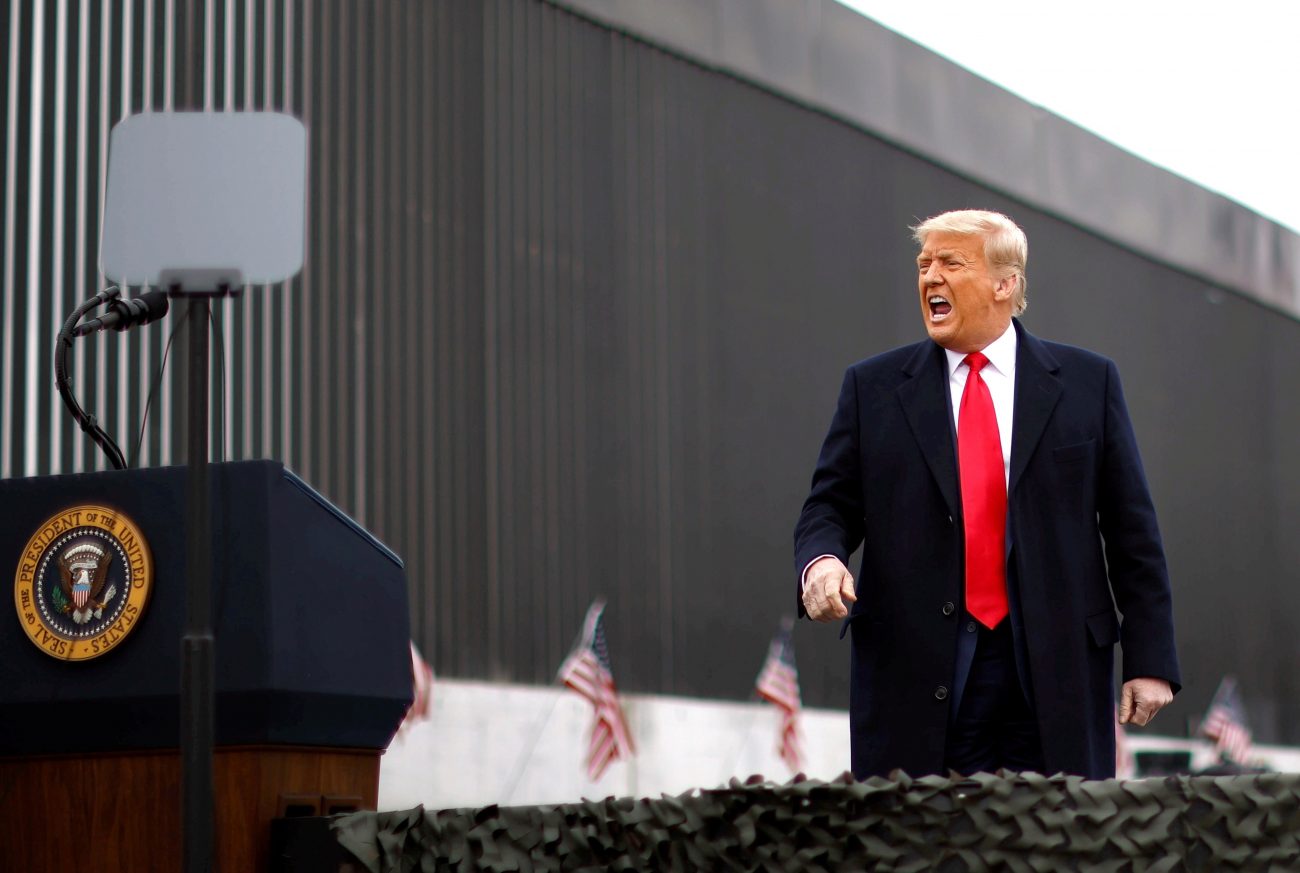 It was the promise that propelled him to the presidency, so it was unusual to see President Donald Trump relatively subdued about it, as he stood just feet away Jan. 12 from the border wall he said he promised supporters he’d build.

With part of the structure looming in the background, he touted his administration’s immigration policies, but also zigzagged between them and a defense of the role he is accused of playing in a Jan. 6 mob attack on the U.S. Capitol that left five dead.

For one of the last visits of his presidency, Trump chose the Rio Grande Valley, the setting of some of his most criticized immigration polices — separation of families and detention of minors — to emerge from public and political isolation following the U.S. Capitol attacks.

“I’m honored to be here in the Rio Grande Valley with the courageous men and women of Customs and Border Patrol … we gave you 100% of what you wanted,” he said, referring to the structure.

News accounts said that instead of building the wall he promised, construction consisted mostly of replacing old barriers with new and reinforced portions, adding a little less than 50 miles from what was there when he took office.

“We can’t let the next administration even think about taking it down,” he said. “I don’t think that will happen. I think when you see what it does and how it’s so important for our country, nobody is going to be touching it and you are very proud of it and you’re proud of the work you did ’cause we really designed it together.

“We’re joined together to celebrate a great achievement: the extraordinarily successful building of the wall on the southern border.”

No sooner had he started, however, he began talking about the attacks on the Capitol and making thinly veiled remarks referencing his being banned from social media platforms as well as mentioning the pandemic.

“I’d like to briefly address the events of last week. Millions of our citizens watched on Wednesday as a mob stormed the Capitol and trashed the halls of government,” Trump said.

“As I have consistently said throughout my administration, we believe in respecting America’s history and traditions, not tearing them down. We believe in the rule of law, not in violence or rioting,” he said, then described the pandemic as a “horrible, horrible invisible enemy.”

He weaved in and out of immigration and would occasionally talk about how free speech was “under assault like never before,” attacking President-elect Joe Biden and efforts by members of Congress to impeach him — including some fellow Republicans. (As of late Jan. 13, the House voted 232-197 to impeach him.)

Some called the border stop a victory lap as the Trump presidency wraps up, but the visit seemed almost overlooked, even by groups, including Catholic organizations, that largely criticized his immigration policies along the border the past four years.

All eyes, instead, seemed to be focused on efforts by the House of Representatives to impeach him the following day.

The American Civil Liberties Union, however, and the American Immigration Council, wasted no time in criticizing the visit.

Dror Ladin, staff attorney with the ACLU’s National Security Project, said in a Jan. 12 press release the organization sent out that the wall was symbolic but not for the right reasons.

“President Trump’s vanity wall will go down in history as yet another example of this administration’s lawlessness and xenophobia,” Ladin said.

The organization filed a brief with the Supreme Court, fighting to have the wall taken down. The high court still is deciding the outcome of the case with arguments scheduled for next month.

“Every lower court has agreed that the president’s wall-funding grab was unlawful, and we are asking the Supreme Court to finally end this pointless, wasteful, and destructive project. It’s time to tear this unlawful wall down,” Ladin said.

Aaron Reichlin-Melnick, of Immigration Impact, a project of the American Immigration Council, said the visit not only highlighted his attacks on immigrants but also on the country’s democracy.

“Five years ago, Donald Trump descended an elevator and declared that Mexico was sending rapists and ‘bringing crime’ across the border. Now, while America still reels from the deadly insurrectionist attack on the Capitol building, Trump is traveling to Texas today to boast about the border wall,” Reichlin-Melnick wrote.

“But rather than highlight accomplishments, Trump’s trip to the border only serves to drive home the point that there is no daylight between his attacks on immigrants and his attacks on democracy,” he said.

While some in the Rio Grande Valley supported the president’s visit, detractors urged local lawmakers to cancel the visit.

One group, the Texas Civil Rights Project, took out a full-page bilingual ad in the McAllen Monitor newspaper that said in big block letters: “You are not welcome here. Fuera,” using the Spanish word for “get out.”

Perhaps because of the images that emerged out of the U.S. Capitol the week before, the mayor of McAllen released a statement the night before the visit and said he couldn’t prevent the president from visiting the city, but he made a plea.

“I understand that emotions are high on both sides, for or against the president and I hope that if there are demonstrations for or against, that they are peaceful with respect to our law enforcement personnel,” Mayor James Darling said.