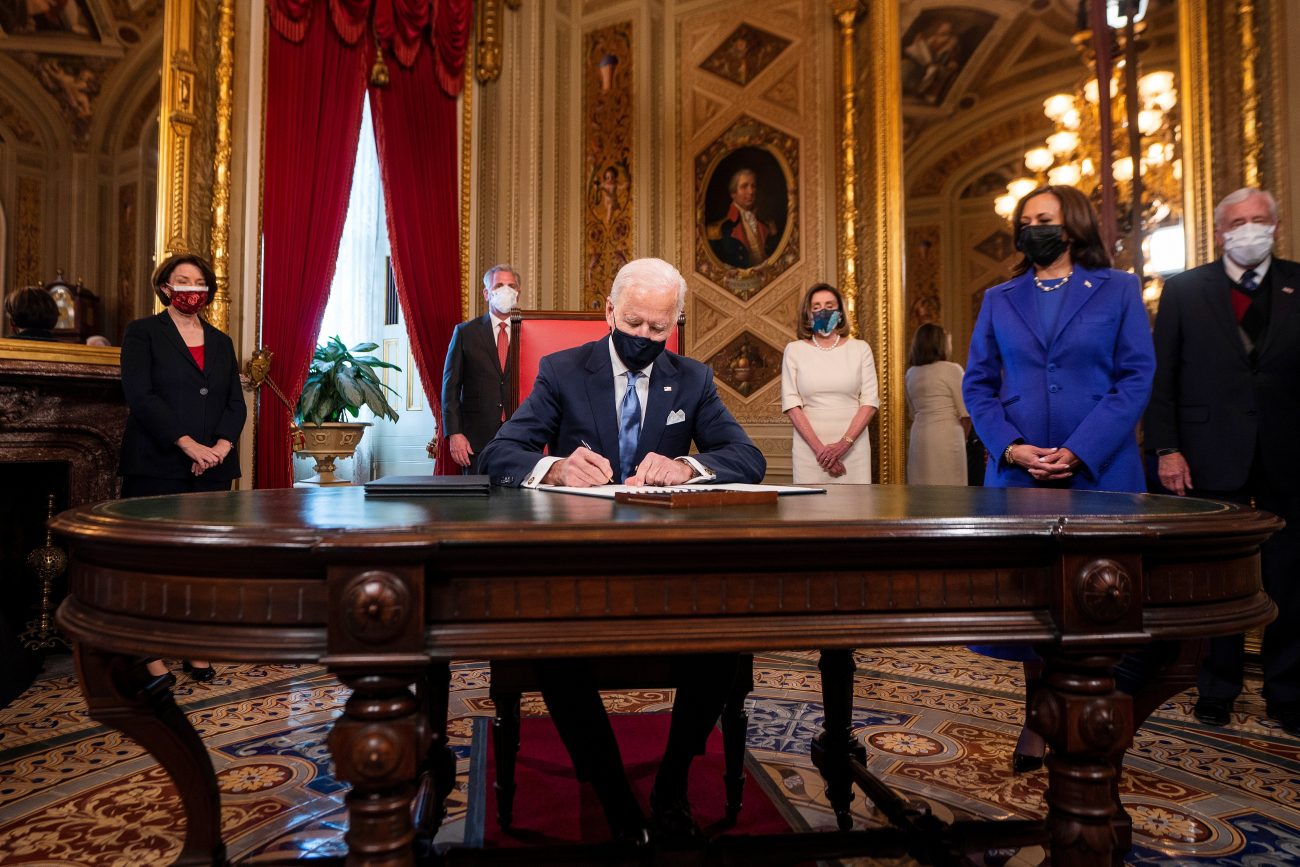 Some of Trump’s executive orders undone by Biden’s actions Jan. 20 were themselves reversals of policies by other past presidents.

“We welcome the Executive Order from @POTUS to preserve and strengthen #DACA,” said a Jan. 21 tweet posted by Kevin Ryan, president of Covenant House. “We urge Congress to act quickly and pass legislation that provides permanent protection, including a path to citizenship, for #Dreamers.”

Los Angeles Archbishop José H. Gomez, president of the U.S. Conference of Catholic Bishops, and Auxiliary Bishop Mario E. Dorsonville of Washington, head of the bishops’ Committee on Migration, likewise praised this move “toward ensuring that immigration enforcement in our country is balanced and humane.”

The Department of Homeland Security said that effective Jan. 21, it was instituting a 100-day pause in deportations and rescinding the “remain in Mexico” policy that required those seeking asylum in the United States to stay in Mexico until their case came up for review.

Another key executive order from Biden erases a Trump-imposed travel ban, which started out with a half-dozen majority-Muslim countries and later was expanded to include four African nations, plus Myanmar and Kyrgyzstan.

He also directed the State Department to restart visa processing for individuals from the formerly banned nations, and to develop ways to address harm caused by the ban.

“We welcome yesterday’s proclamation, which will help ensure that those fleeing persecution and seeking refuge or seeking to reunify with family in the United States will not be turned away because of what country they are from or what religion they practice,” said a joint statement Jan. 21 from Cardinal Timothy M. Dolan of New York, head of the U.S. bishops’ Committee for Religious Liberty, and Bishop Dorsonville.

Biden also halted construction of Trump’s U.S.-Mexico border wall via an “immediate termination” of Trump’s national emergency declaration that allowed billions of dollars allocated to the Defense Department to go to wall construction, as well as a review of the legality of those funding transfers.

“Walls are a failure of public policy and a failure of a compassionate imagination. We encourage our new President to reimagine border management so that it responds to the needs of border communities and migrants,” said a Jan. 20 statement by said Scott Wright, director of the Columban Center for Advocacy and Outreach.

“This must include ending detention, restoring access to asylum and removing all military presence from the border,” Wright said. “Let us instead invest in our communities and support their efforts to welcome our new neighbors.”

The new president signed a letter announcing the United States’ intent to rejoin the Paris climate accord, which will take effect in February.

Trump formally withdrew the U.S. from the accord in 2019. He argued the agreement would harm the U.S. economy and hurt U.S. workers.

“On the fifth anniversary of the Paris Agreement, Pope Francis called for ‘a culture of care, which places human dignity and the common good at the center,'” said a joint statement Jan. 21 from Archbishop Paul S. Coakley of Oklahoma City, head of the bishops’ Committee on Domestic Justice and Human Development; Bishop David J. Malloy of Rockford, Illinois, head of the bishops’ Committee on International Justice and Peace; and Sean L. Callahan, president and CEO of Catholic Relief Services.

“The environment and human beings everywhere, especially the poor and vulnerable, stand to benefit from the care of our common home. For this reason, we urge the United States to do more to help poorer nations adapt to the changes in climate that cannot be prevented,” they added.

One climate-related executive order by Biden revoked the permit for the Keystone XL pipeline.

Another enforces a temporary moratorium on oil and natural gas leases in the Arctic National Wildlife Refuge. A third reversed the rollbacks to vehicle emissions stands. A fourth undid Trump-era decisions to reduce the size of several national monuments, and a fifth reestablished a working group on the social costs of greenhouse gases.

“We look forward to administrative and legislative actions that lead to a better future for our children that includes cleaner, safer sources of energy, good-paying clean energy jobs, less carbon pollution that contributes to climate change, and cleaner air and water for all — especially for low-income communities and those most vulnerable to this pollution including unborn and young children — many of whom have been on the front lines of pollution for too long,” said a Jan. 20 statement from Dan Misleh, executive director of the Catholic Climate Covenant.

Further, Biden issued an executive order overturning a Trump executive order that called for aggressive tactics to find and deport immigrants in this country illegally. Another executive order also blocked the deportation of Liberians who have been living in the United States.

“The executive orders that President Biden issued today … are a turn in the right direction to build a beloved community where all life can flourish. For that, we give thanks,” said a Jan. 20 statement from Susan Gunn, director of the Maryknoll Office for Global Concerns.

Gunn cited in particular his orders to establish a White House COVID-19 team, to cease withdrawal from the World Health Organization, to rejoin the Paris Climate Agreement, to preserve and fortify DACA, and to revoke a travel ban on some Muslim-majority countries.

Biden signed an executive order requiring social distancing and the wearing of masks on all federal property for the next 100 days. He also issued a “100 days masking challenge” to Americans to stem the spread of the coronavirus.

Further, he reinstated ties with the World Health Organization, from which the Trump team chose to withdraw last year. The head of the U.S. delegation will be Dr. Anthony Fauci, a Catholic who is considered the leading U.S. infectious disease expert.

Biden reversed a Trump administration action that weakened federal civil rights protections against discrimination on the basis of sexual orientation or gender identity, and revoked a Trump executive order limiting the ability of federal agencies and contractors to conduct diversity and inclusion training.

Biden designated Susan Rice, head of his Domestic Policy Council, to lead the effort to require all federal agencies to make “rooting out systemic racism” central to their work.

He also rescinded the Trump administration’s “1776 Commission”; its report, issued in the Trump’s last days as president, was derided by educators and historians for its treatment of slavery.

The commission’s report argued slavery was not “a uniquely American evil”; Trump formed the commission to counter The New York Times’ “1619 Project.”

The new president established ethics rules for all who serve in his administration, and ordered all appointees in the executive branch to sign an ethics pledge.

Biden also issued a freeze on all new regulations put in motion by Trump in the waning days of his administration. The so-called “midnight regulations” put in place by a lame-duck president can evade public review before they are put into place.

Many of the Jan. 20 executive orders dealt with issues that made front-page headlines for days, if not weeks or months. But these have been taken care of in one fell swoop, and were overshadowed by the inauguration of Biden and Vice President Kamala Harris.

Different constituencies within the Democratic Party had urged Biden to take an aggressive “Day One” stance to counter some of Trump’s policies they considered to be the most objectionable.

But observers said the coming days held the promise of still more Day One-style bunches of executive orders nullifying Trump initiatives — few of which would have happened were it not for continuous congressional gridlock stymieing the passage of laws.