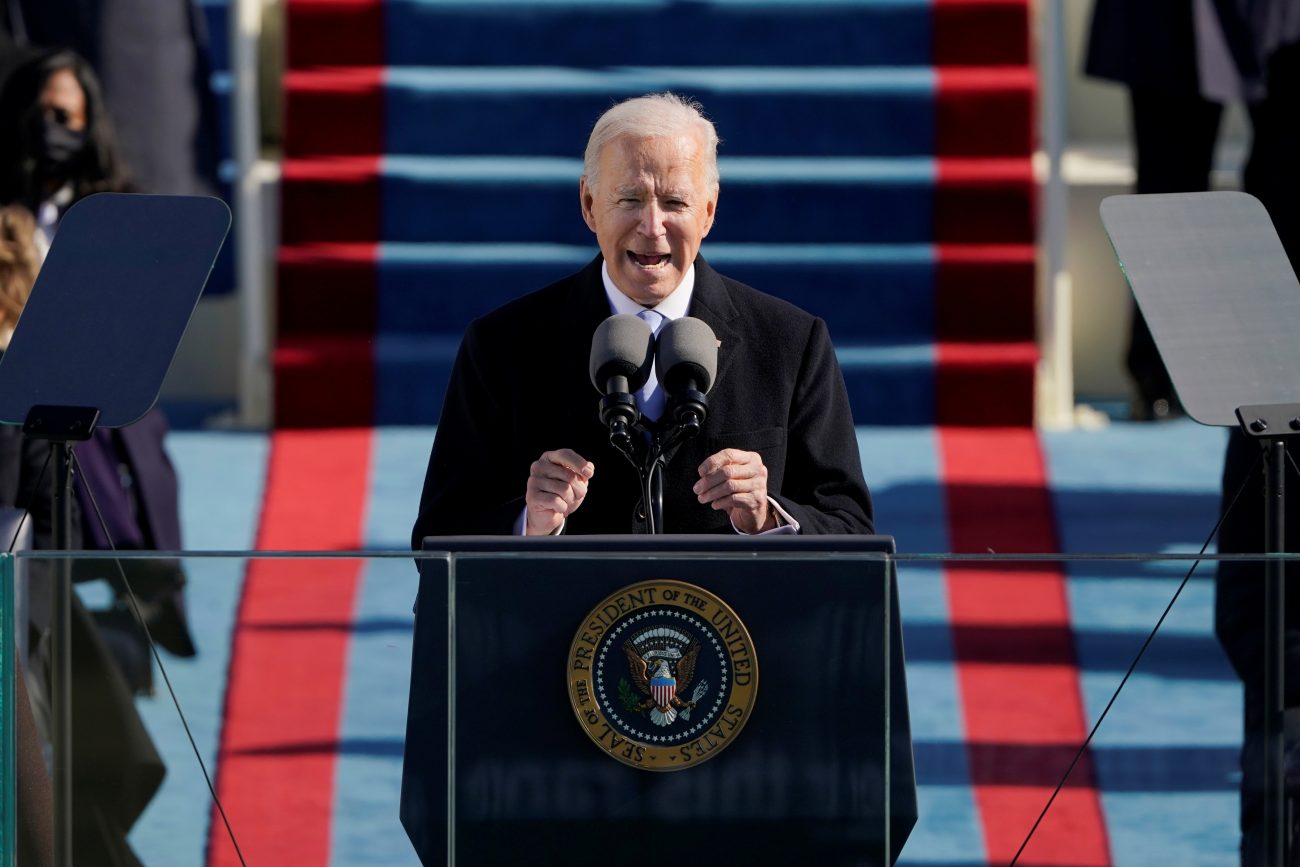 U.S. President Joe Biden speaks during his inauguration at the Capitol in Washington Jan. 20, 2021. (CNS photo/Patrick Semansky, pool via Reuters)

WASHINGTON (CNS) — In his inaugural address Jan. 20, President Joe Biden said he is committed with his “whole soul” to bring this country together.

He pleaded with Americans — having come through a bitter election, a time of racial reckoning and still in the midst of a deadly pandemic — to similarly take up this cause.

“It’s time for boldness because there is so much to do,” Biden said in a 21-minute speech, urging Americans to work together for unity in this historic moment and stressing that the “American story depends not on some, but all.”

The nation’s second Catholic president also urged the nation to recognize that the American story is one of hope, not fear, light, not darkness, and said “democracy has prevailed” despite efforts to shut it down just two weeks previously in the Capitol riots, which took place when Congress was confirming the election results.

On a cold, breezy but sunny day, he spoke with a somber sense of urgency reminding the crowd present — which was small due to both the pandemic and the security lockdown — that “we have come so far, but still have far to go.”

Mixing realism with hope, he said there is much to repair and much to restore but added: “We will press forward.”

And referring to the deep divide within the country, the 46th president said sternly: “We have to be better than this” and promised that democracy will not be driven out as Americans strive to end this “uncivil war that pits us against each other.”

The president called for a moment of silence for all those who had died during the COVID-19 pandemic. He also spoke of the destructive nature of racism and the need to reject political extremism and manufactured facts.

“I will be president for all Americans,” he added, referring to those who voted for him and those who didn’t.

This very different presidential inauguration was obvious from the start with attendees wearing face masks and greeting one another with elbow bumps because of the coronavirus but also because of the increased security presence a stark reminder of the Jan. 6 violence.

Biden was sworn in by Chief Justice John Roberts using the family Bible he has used many times before: twice when being sworn in as vice president and seven times as senator from Delaware. It also was used by his son Beau in his swearing-in ceremony as Delaware’s attorney general.

He said in an interview in December with talk show host Stephen Colbert that this Bible has been a family heirloom since 1893. 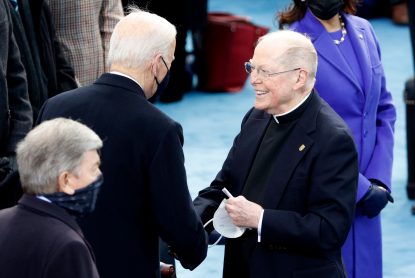 The inauguration’s invocation was led by Jesuit Father Leo O’Donovan, former president of Georgetown University and current director of mission for Jesuit Refugee Service. The priest, a friend of the Biden family, was the main celebrant at the funeral Mass for Biden’s son Beau in 2015.

In his prayer, the priest quoted Pope Francis and stressed the need to care for one another “in word and deed, especially the least fortunate among us.”

Another Jesuit priest, Father Kevin O’Brien, president of Santa Clara University in California, gave the homily at a Mass at the Cathedral of St. Matthew in Washington just before the inauguration. The Mass was attended by Biden, now-Vice President Kamala Harris, family members and some members of Congress from both sides of the aisle.

In his homily, he also spoke of the need for healing and said the president and vice president will lead this country forward.

“Every day, you will strive to heal our nation’s wounds and reconcile differences and bring us together. You know too well the challenges ahead and the cost of service,” the priest said. “My deepest prayer for you today, as a priest, citizen and friend, is that you always remember that the Lord is near and no matter the sound and fury around you, that God wants to give you peace, a deep-seated peace that will sustain you.”

The theme of healing a divided nation and the role everyone should play in it was prominent throughout inaugural ceremonies. It was highlighted by Sen. Amy Klobuchar, D-Minnesota, who said in the introductory remarks of the inauguration ceremony that this day was one when “democracy picks itself up” after what it went through Jan. 6.

She emphasized that it and that it falls to all Americans to “take up the torch of our democracy, not as a weapon of political arson, but as an instrument for good.”

NEXT: Second Catholic president causes some to celebrate, gives others anxiety