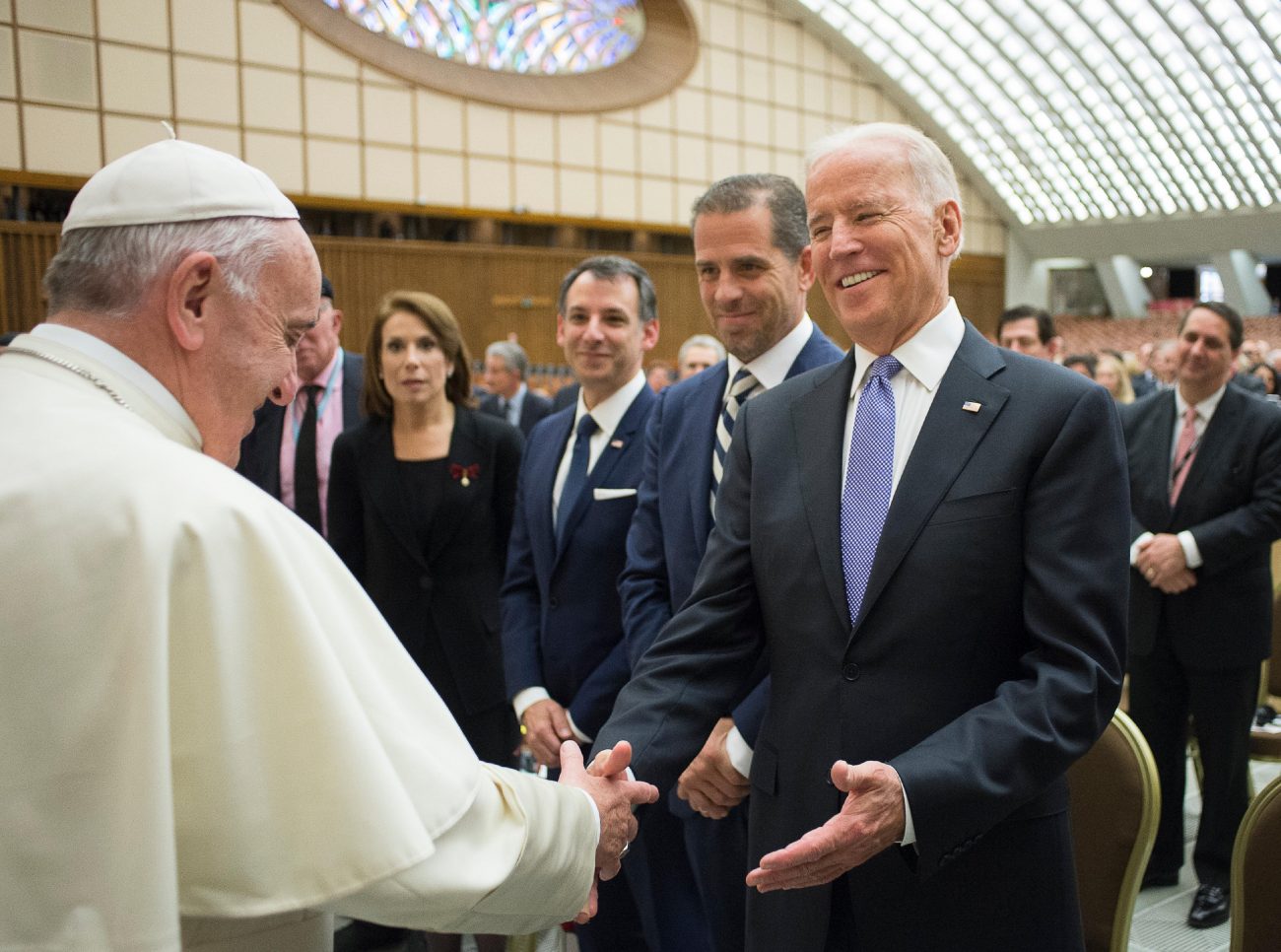 Pope Francis greets U.S. Vice President Joe Biden after both spoke at a conference on adult stem cell research at the Vatican April 29, 2016. The pope sent a written message to Biden upon his Jan. 20 inauguration as president of the United States. (CNS photo/Vatican Media)

VATICAN CITY (CNS) — Pope Francis prayed that President Joe Biden would work to heal the divisions in U.S. society and promote human dignity and peace around the globe.

“Under your leadership, may the American people continue to draw strength from the lofty political, ethical and religious values that have inspired the nation since its founding,” the pope wrote in a congratulatory message Jan. 20 as Biden was inaugurated as the 46th president of the United States.

Popes traditionally have sent such messages and assurances of prayer to a new U.S. president upon his inauguration and have included mention of issues of concern, particularly about the dignity of every human life.

“At a time when the grave crises facing our human family call for farsighted and united responses,” Pope Francis wrote to Biden, “I pray that your decisions will be guided by a concern for building a society marked by authentic justice and freedom, together with unfailing respect for the rights and dignity of every person, especially the poor, the vulnerable and those who have no voice.”

“I likewise ask God, the source of all wisdom and truth, to guide your efforts to foster understanding, reconciliation and peace within the United States and among the nations of the world in order to advance the universal common good,” he said.

Pope Francis also prayed that Biden, his family and “the beloved American people” would receive “an abundance of blessings.”

Biden, the nation’s second Catholic president after John F. Kennedy, has not always publicly supported legislation in line with all the church’s teachings, particularly when it comes to abortion. But his faith has been reflected in a range of other issues, especially concern for the poor, care for the environment, immigration policy and international peace.

Pope Francis already had a phone conversation with Biden Nov. 12 to congratulate him on winning the election.

“The president-elect thanked His Holiness for extending blessings and congratulations and noted his appreciation for His Holiness’s leadership in promoting peace, reconciliation and the common bonds of humanity around the world,” said a readout on the call released by Biden’s transition team in Wilmington.

Biden, it said, “expressed his desire to work together on the basis of a shared belief in the dignity and equality of all humankind on issues such as caring for the marginalized and the poor, addressing the crisis of climate change, and welcoming and integrating immigrants and refugees into our communities.”

The pope and Biden have met on several occasions: as vice president, Biden attended Pope Francis’ inauguration in 2013 and the two met briefly afterward; when Pope Francis visited the United States in 2015, Biden was present for several events, but he and his wife also had a private meeting with the pope; and in 2016 the two met when Biden spoke at a Vatican meeting on regenerative medicine.

NEXT: Biden’s inaugural address calls for Americans to work for unity