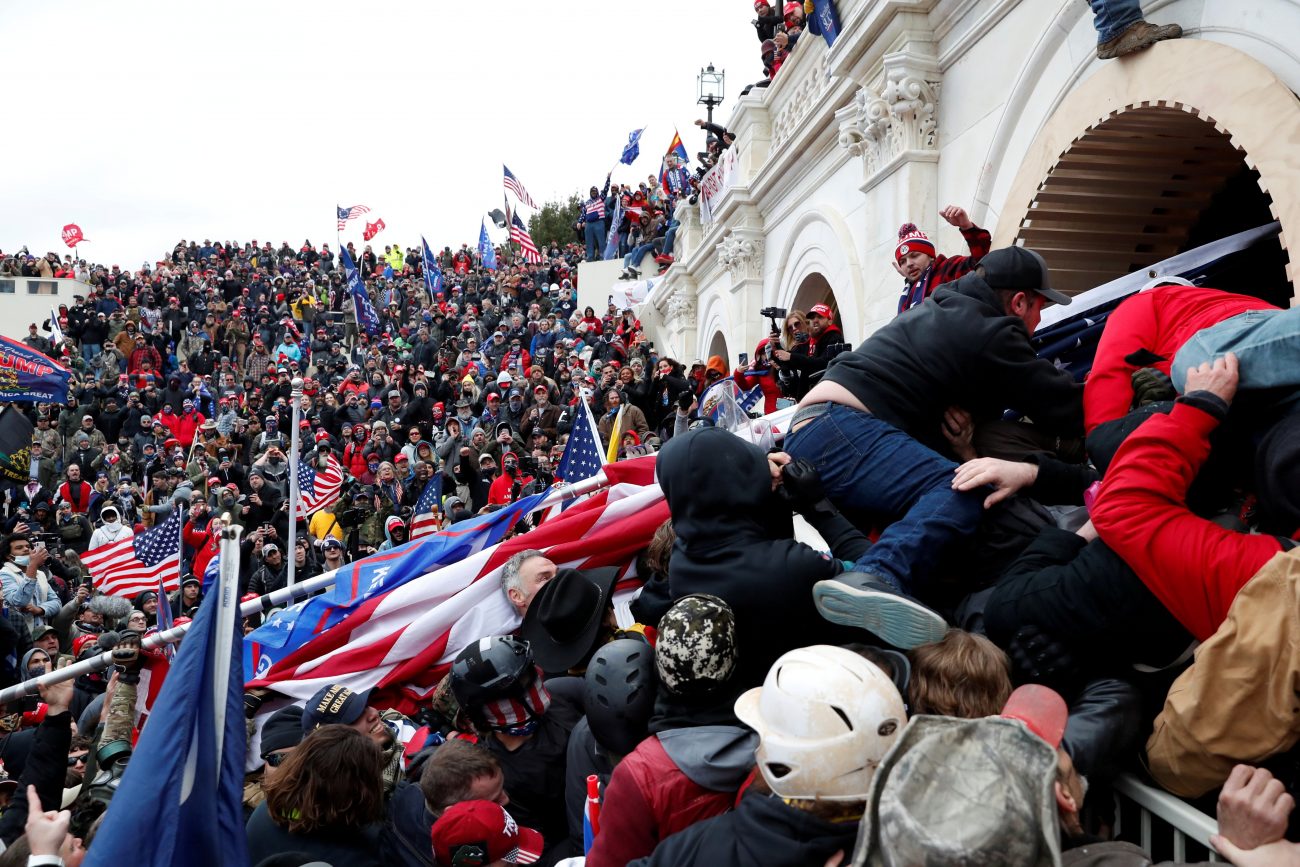 President Donald Trump supporters storm into the U.S. Capitol in Washington Jan. 6, 2021, during a rally to contest the certification of the 2020 presidential election. (CNS photo/Shannon Stapleton, Reuters)

WASHINGTON (CNS) — House Speaker Nancy Pelosi referenced the Epiphany, St. Francis of Assisi, and also uttered a prayer as the House of Representatives reconvened the night of Jan. 6 to confirm the Electoral College win of President-elect Joseph R. Biden Jr. in the November presidential election.

The count had been interrupted by hundreds of marauders who breached the Capitol that afternoon, bringing the count to a halt.

“Today, Jan. 6, is the feast of the Epiphany,” when the Christ Child was first revealed as a human beyond Mary and St. Joseph, Pelosi, D-California, said. “On this day of revelation, let us pray that this instigation to violence will provide an epiphany for our country to heal.”

Later, near the end of her remarks, Pelosi, who is Catholic, said: “So on this holy day of Epiphany, let us pray. I’m a big believer in prayer. Let us pray that there will be peace on earth and that it will begin with us. Let us pray that God will continue to bless America with that.”

Reaction by Catholic leaders to the Capitol breach — the most serious since the British burned down the building in 1814 during the War of 1812 — was swift.

Describing “a truly sad day for our country” and “not a reflection of who we are,” Philadelphia Archbishop Nelson Pérez said in a Jan. 7 statement that Americans share the rights of free speech and assembly, and “are united by democracy.” 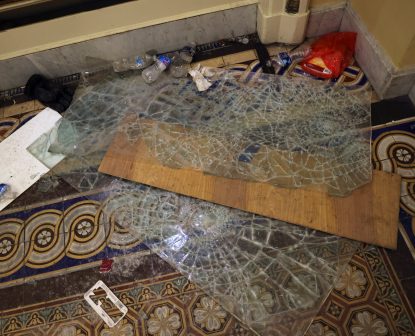 He said differences of opinion “cannot under any circumstances degenerate into lawlessness and chaos.”

Should democracy “devolve into what we witnessed yesterday — violent disorder and chaos — the rights we cherish will disappear into the abyss of anarchy,” he said.

He expressed gratitude to law enforcement agents, elected officials and their staff who worked through “a dark day in our history to ensure the peaceful transition of power.”

“May God grant us wisdom as we seek common ground as Americans and may he bring peace to our land. Today is a new day. It is a call for all people of faith to lift their hearts in prayer for our country and for healing in a spirit of unity rooted in who we are — citizens of the United States of America.”

“I join my brother U.S. bishops in condemning the violence we witnessed today in our nation’s capital and condemning the events and rhetoric leading to the mob violence,” said a Jan. 6 tweet from Archbishop Mitchell T. Rozanski of St. Louis that was posted on the Twitter feed of the St. Louis Review, the archdiocesan newspaper.

“The Gospel itself is a full-throated and stern warning against mob action,” said a Jan. 6 tweet from Bishop Daniel E. Flores of Brownsville, Texas. “If institutions of order & lawful transitions of authority are systematically deconstructed & trampled upon by factional self-interests, it leads to just that, a mob. Let the elected govern.”

“Let’s pray for President-elect Biden and Vice President-elect Harris as they prepare to serve our nation in their elected offices,” said a Jan. 7 tweet from Bishop Michael F. Olson of Fort Worth, Texas. “Let us ask the Lord for peace and the order of right reason during this transition.” 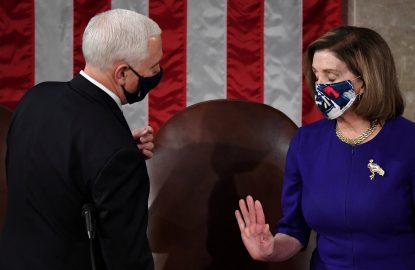 In praying for those engulfed in the violence at the Capitol, Cardinal Wilton D. Gregory of Washington — in whose archdiocese the Capitol is located — said: “There are injuries and tremendous harm, including reports about the loss of life.” A woman shot inside the Capitol during the melee later died at a hospital. A second woman and two men died from what Metropolitan Police Dept. Chief Robert Contee called “medical emergencies,” without specifying their nature.

“Together, we must intentionally pause and pray for peace in this critical moment,” Cardinal Gregory said. “The divisive tone that has recently so dominated our national conversations must change. Those who resort to inflammatory rhetoric must accept some responsibility for inciting the increasing violence in our nation.”

“I join people of goodwill in condemning the violence today at the United States Capitol. This is not who we are as Americans,” said a Jan. 6 statement by Archbishop José H. Gomez of Los Angeles, president of the U.S. Conference of Catholic Bishops.

“The peaceful transition of power is one of the hallmarks of this great nation. In this troubling moment, we must recommit ourselves to the values and principles of our democracy and come together as one nation under God.”

The Basilica of the National Shrine of the Immaculate Conception issued a short tweet Jan. 6: “Let us pray for peace in our nation. Mary Immaculate, pray for us!”

“There are few words that can describe the shock I feel to see our Capitol building occupied by violent rioters,” said a Jan. 6 tweet by Bishop Frank T. Caggiano of Bridgeport, Connecticut. “As Americans, we should be deeply disturbed to see an important symbol of freedom and liberty in our nation violated in such a way. Our nation is better than that.”

“The political violence witnessed today at our nation’s Capitol underscores the urgency for a total recalibration of American politics centered on the dignity and flourishing of the human person,” said a Jan. 6 statement from Catherine Glenn Foster, president and CEO of Americans United for Life. “Our country’s season of unrest and violence must come to an end.”

“Let us be clear. The events unfolding today at the U.S. Capitol are the result of the demagoguery of one man, President (Donald) Trump, and the failure of all those — politicians, media, family and more — who excused, overlooked, dismissed or otherwise encouraged the hateful and divisive rhetoric that have defined this president’s term in office,” said a Jan. 6 statement from Johnny Zokovitch, executive director of Pax Christi USA.

“Those who could have and should have held this president accountable did just the opposite for the past four years — often with designs on advancing their own agendas — and today’s ugly, shameful incidents at the U.S. Capitol were the sad, predictable outcome of this abdication of responsibility,” Zokovitch said.

“The words and actions of our president have directly led his supporters to sedition and insurrection,” said a Jan. 6 statement from Sister Simone Campbell, a member of the Sisters of Social Service and executive director of Network, the Catholic social justice lobby. “We the people are for the common good. Our nation is better than this, and I expect all of our elected officials to denounce these crimes.”

“We are witnessing one of the greatest assaults on our democracy since the Civil War,” said a Jan. 6 statement from Richard Trumka, a Catholic who is president of the AFL-CIO. “Today’s attempted coup has been years in the making as Donald Trump consistently spews venom, conspiracies, hate and lies to his supporters. They are carrying out his wishes.”

“Today’s scene of rioting at the U.S. Capitol as Congress sought to affirm the Electoral College results is anathema to who we are as Americans and to our Judeo-Christian values,” said a Jan. 6 statement by the New York State Catholic Conference. “We have already seen loss of human life. This must end. This is not who we are.”

New Ways Ministry, an unofficial organization that ministers to gay and lesbian Catholics, similarly condemned the Jan. 6 breach. “Our nation should learn many lessons from this action for which the perpetrators have been groomed for over the last four years of the Trump presidency,” said a Jan. 7 statement from Francis DeBernardo, its executive director.

“Catholic Church leaders need to learn a lesson from this incident, too: Hateful and violent rhetoric results in hateful and violent actions,” DeBernardo added. “When demonizing and dehumanizing language is preached, people are encouraged to fulfill these messages with destruction, damage and death.” 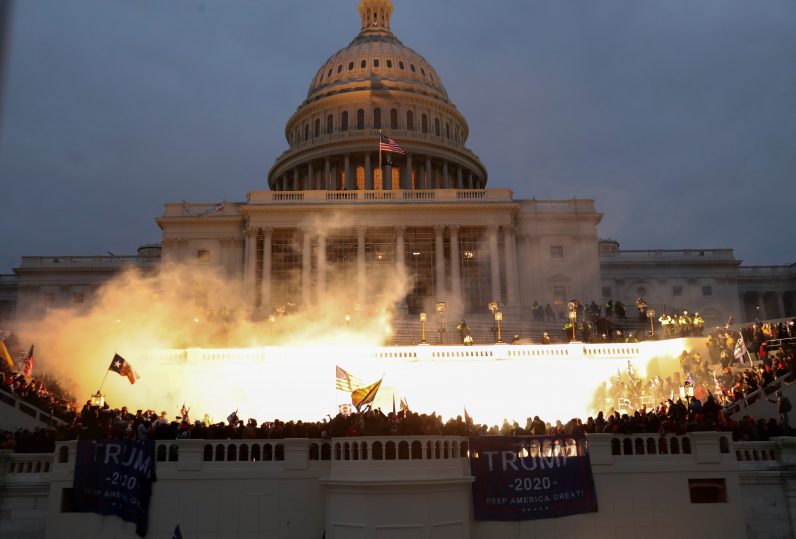 An explosion at the U.S. Capitol in Washington is caused by police munition while supporters of President Donald Trump breach the building Jan. 6, 2021. (CNS photo/Leah Millis, Reuters)