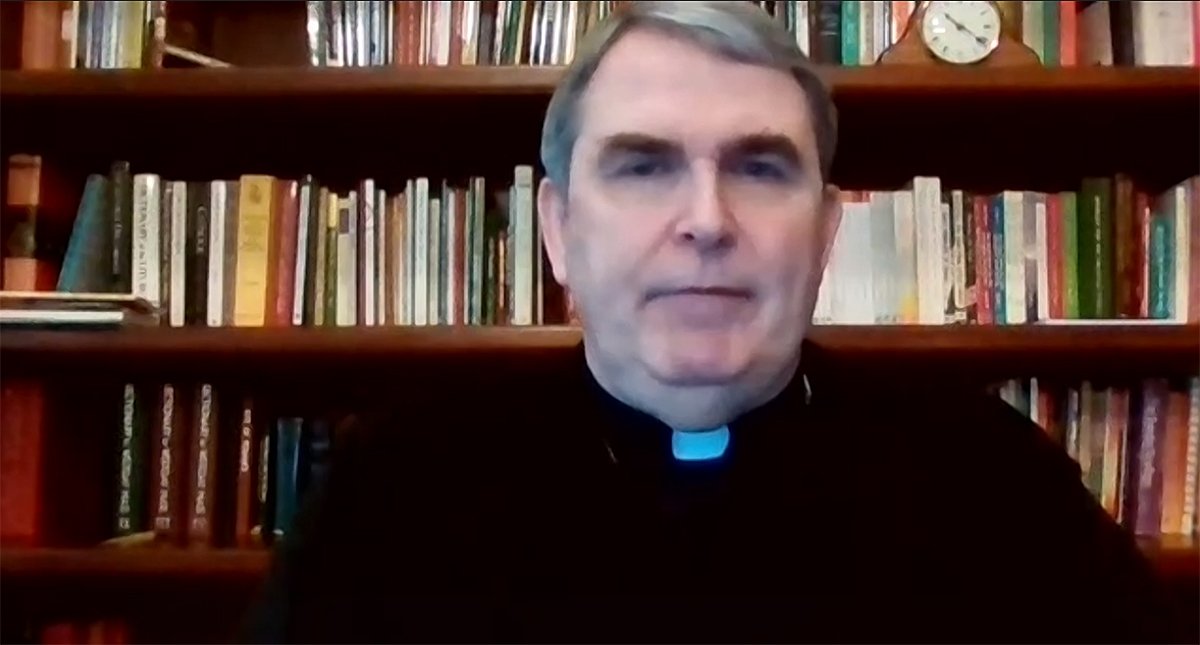 Bishop Michael W. Fisher is seen during a Zoom interview with Catholic News Service Jan. 13, 2021. Bishop Fisher will be installed as the 15th bishop of the Diocese of Buffalo, N.Y., on Jan. 15. (CNS)

WASHINGTON (CNS) — Nobody said it was going to be easy in being placed in charge of a diocese where “60 Minutes” did a story on the contentious handling of clergy sexual abuse allegations, with the diocese later declaring Chapter 11 bankruptcy.

Still, while acknowledging “a clear failing” on the part of the Diocese of Buffalo, New York, in the past, incoming Bishop Michael W. Fisher sees his appointment to the western New York diocese as a “great gift.”

“I haven’t had a moment’s hesitation in terms of accepting the challenge and the great gift of coming here to Buffalo,” Bishop Fisher told Catholic News Service in a Jan. 13 Zoom call from the rectory of St. Joseph Cathedral in Buffalo, where he was still under quarantine two days prior to his scheduled Jan. 15 installation. “I’ve been very impressed with the resolve and the desire of the people here to bring about renewal in the diocese.”

Bishop Fisher, who had been an auxiliary bishop in the Archdiocese of Washington prior to his Buffalo appointment, said he had some awareness of the problems encountered in the diocese, but as vicar for clergy in the Washington Archdiocese, was more focused on his responsibilities there.

Now that he is assigned to Buffalo, though, he has developed a greater awareness. “There was sometimes a clear failing in not moving fast enough to resolve past cases,” Bishop Fisher said. “There’s also been a lack of communication between the bishop and the priests, and sometimes (between) the bishop and people he’s been called to serve.”

He added, “I know I’m inheriting a diocese with great faith, a long legacy of the Catholic Church here in western New York. Yes, they have great challenges, but those are things that we’ll need to look at and delve into. We’ll do it together in faith and careful deliberation and decision-making. I think we’ll look at making sure everybody is communicated (with). I believe in communication and consultation and collaboration, the three C’s.”

Bishop Fisher said, “My concern is going to be on the healing aspect of ministry here, and working with those who have been harmed by past transgressions, and past decisions that were made.”

In presenting a new face to the diocese without criticizing his predecessor, now-retired Bishop Richard J. Malone, Bishop Fisher said, “I have to be focused on the people that I’ve been sent to serve — gifted to serve.”

He added, “We need to embrace that zeal that each of us Christians are called to do. To be a healer. I think we’re being called to heal. That’s what the sacraments are all about. Some hard work has already been done, but a lot more needs to be done. I want to support that in whatever form that takes. It’s going to involve planning, it’s going to involve lots of consultation with the people.”

Righting the ship with regard to the abuse issue won’t be the only priority Bishop Fisher has.

“We need to pray for vocations, that the church is given holy and good men that are called to the priesthood. We need to pray and nurture vocations to religious life, to priesthood. That’s always a challenge for us. That would certainly be a priority,” he said. “Also, healing, as I said before, those who have been victims of abuse.”

Bishop Fisher recalled being at the Vatican a few years ago with other new bishops, and they were with Cardinal Sean P. O’Malley of Boston, who also is one of Pope Francis’ key advisers.

“He gave us a talk, and he said that our ministry as bishops for the rest of our life will always embrace the healing of the victims of abuse. So I take that seriously and hope to be a part of that, if the Spirit will allow me,” Bishop Fisher said.

A Baltimore native whose mother grew up in Washington and who can trace ancestors back into the 1700s on Maryland’s Eastern Shore, Bishop Fisher, a history buff, said he would miss the opportunities the region offers to dive deep into history.

But “I also know Buffalo is rich in history,” he said. “This part of New York, I’m looking forward to getting to know it — access to the different historical sites and things.”

Bishop Fisher credited “love of family, that devotion to family values, (that) has helped me understand what a parish can be all about. Ultimately, a diocese is a family of parishes. As bishop, I look forward to going to a parish not as a visitor but as a part of their community as a shepherd.”